You are here: Home / Basics / What is a Cooling Tower – Types, Working, Uses

Generally, in a steam power plant, boilers are used for the production of steam by heat water. The heated water is converted to steam which in turn converted to Electrical Energy by rotating a turbine. The steam generated after this operation instead of exhausting to the atmosphere can be reutilized. For utilization, we depend upon the process of condensation. The steam generated is sent to a cooling tower to convert the steam into cold water. The data of collected water can be reused by the boiler to feedwater through a feed check valve. This article discusses what is a cooling tower, its components, types, forced, natural, and induced draught fans, benefits & disadvantages.

What is the Cooling Tower?

A cooling tower is a device that is used for the conversion of hot steam to cold water. The heat from the hot steam is escaped to the atmosphere such that the cold water droplets are collected in a basin. The following image depicts the cooling tower. 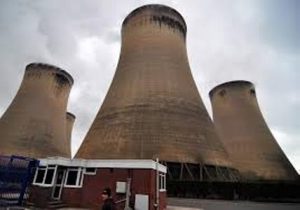 These are classified based on the flow of air patterns and air drafts. The classification of Cooling towers is illustrated in the below figure.

Based on Air draft is further classified as below

Based on the Airflow pattern is further classified as below

The flow of air and the flow of water will be perpendicular to each other in a crossflow cooling tower. The crossflow cooling tower mechanism is illustrated in the following diagram. The induced fan provided at the top will absorb dry air from the surroundings which meets the flow of water inside the tower at 90 degrees. The higher the amount of accumulation of cold water in the basin, the higher will be the efficiency. Thus, the operating costs can be reduced. 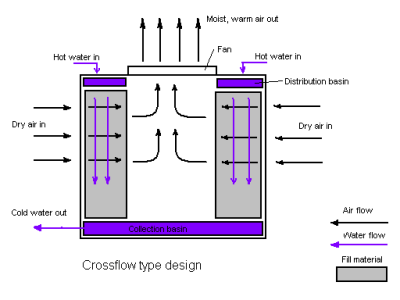 The flow of air will be opposite and parallel to the direction of the flow of water. The efficiency is high compared to the crossflow pattern. The counter flow type cooling tower mechanism is displayed below. 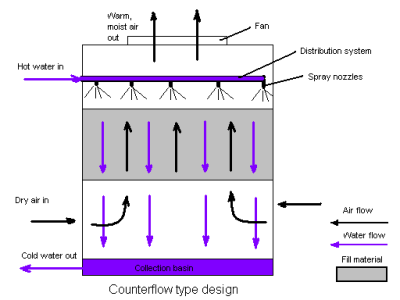 Based on natural draught fan

The hot water flowing through the tubes is sprinkled out through the nozzles inside the cooling tower. The air from the surroundings will interact with the sprinkled hot water. Heat exchange takes place between the atmospheric air and hot water. The hot water will slowly lose its temperature, the air becomes lighter (loses its density) and moves upwards. As the hot water loses its temperature, the water becomes colder and these cold water droplets are collected in a basin provided at the bottom. The lighter water droplets will try to escape out moving upwards which is prevented by an eliminator provided at the top. Some water droplets escape out to the atmosphere as vapor. The figure which depicts the natural circulation of air is shown below. 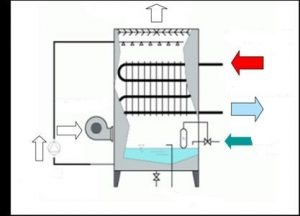 Based on Forced and induced draught fan

The difference is the placement of the fan in order to meet the requirement of atmospheric air suction.

In Forced draught fan, the fan is placed outside the tower and at the bottom such that atmospheric air is circulated from the bottom to the top. The diagram of this fan is given below.

In Induced draught fan, the fan is placed at the top and above the eliminator such that atmospheric air is circulated from the bottom to the top. The image of induced draught is displayed below. 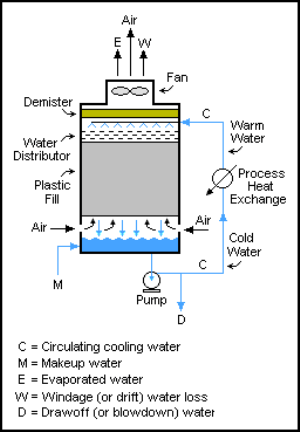 Therefore, the above article discusses an overview of a Cooling Tower. It is one kind of equipment used to remove the heat from the hot Steam and convert it to Cold Water to be reutilized for the production of more steam. Apart from this, we have also discussed different types of cooling towers based on the airflow pattern and also the draught fans. Here is a question what is the main differences between crossflow & counterflow cooling towers?