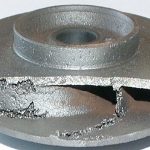 Initially, the speculation of cavitation was known in the period 1754 by Euler and later on the solution to this was presented by Henry Besant in 1859. Thornycroft and Barnaby were the persons who observed the scenario of cavitation on the behind sides of propeller blades. In the context of engineering, pump cavitation is the concept that has to be considered in a high priority, because when it left unobserved, there are chances of the machine getting … END_OF_DOCUMENT_TOKEN_TO_BE_REPLACED