Max Buchholz first introduced Buchholz relay in the year 1921 and was named after him. A relay is basically an appliance of security utilized in electrical transmission systems such as distribution and transmission. Buchholz relay is efficient in protection again arching, fractional discharge, hot spots, and current leakage in electrical systems. The device has an important impact when it comes to economic prospects and is also enhancing the life of equipment of electrical systems. This article will serve as a Buchholz Relay manual.

To understand What is Buchholz relay, head to its definition. The Buchholz relay can be defined as a device which is utilized for the protection against certain dangers in electrical transformers of ratings over 500kVA most of them are oil observing in nature. The device protects the transformers from certain dangers such as insulation failure of turns and impulse breakdown of oil. Moreover, it also extends its support from short-circuiting, incipient, and inter-turn etc. This device is having the capability to sense different kinds of faults and shuts the circuitry to avoid damage. The following is a general Buchholz relay diagram.

There are numerous features of Buchholz relay mentioned below.

First of all, let us understand What is the role of the Buchholz relay?

Buchholz relay working principle is based on mechanics i.e. whenever it is activated mechanically. In cases whenever there is an error in the transformer, no matter how small or large, for instance, the error of insulation, the core of transformer halt its working immediately generating CO2 and Co gases. The Buchholz relay gas analysis is undergone. This will roll over the mercury switch hence, dropping the location of the float. The contacts of switches will break immediately. However, on fewer instances because of the outflow of oil in the tank, few air bubbles are building up which make the upper portion of relay’s container to have a drop in the level of oil and alarm appears.

It can also be elaborated that when any fault occurs in an electrical device i.e. transformer there is some heat generated by fault currents. This heat causes decay of the transformer’s oil and bubbles are created which run upwards. These bubbles are relocating oil in the relay which is in a similar manner as to the extent of gas gathered. This dislocation of oil causes higher float for shutting high mercury switch for the generation of an alarm. Therefore, in case even if a small fault occurs the alarm will be generated. In the case of major faults, heat generated is too high and an enormous gas is created. These massive gases are then floating in an upward direction and its motion is enough for tilting of the float of Buchholz relay. The following image is a depiction of Buchholz relay operation. 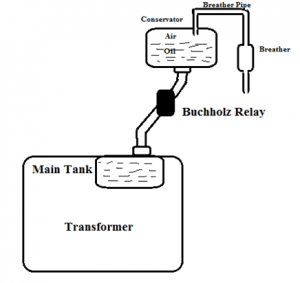 The construction of Buchholz relay is simple and straight forward. There are basically two major elements in the relay. The names of the elements are lower and upper elements. The upper element of the relay consists of a mercury switch which is linked to the float. Whereas, the lower element comprises of mercury switch increased on the hinged flap located over a straight line to the flow of oil. The following is the simple depiction of Buchholz relay construction. 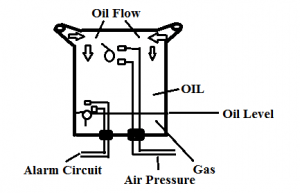 The Buchholz relay advantages and disadvantages are given below in detail.

The following are major advantages of Buchholz relay.

The following are the major disadvantage of the Buchholz relay.

Buchholz relay purpose is important in electrical systems and especially in oil absorbed high rating transformers. The following are some major applications of the relay which is famous for its unique nature.

There is numerous Buchholz relay testing procedure and a few famous tests are explained below in detail. 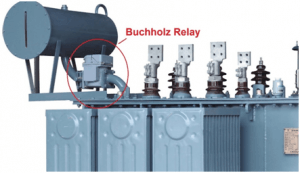 Precautions to take for Installation of Buchholz Relay

The operation of the Buchholz relay is very simple, however, there is a requirement of some special precautions for the installation process of the relay. The following are some of the major precautions which must be considered while installing Buchholz relay.