You are here: Home / Basics / What is Direct Online Starter (DOL)? Construction and Its Advantages/Disadvantages

An Electromagnetically operated contactor is used which can be opened by thermal overload relay whenever a fault condition occurs. Contactors are typically going to be controlled by separate start and stop buttons, and there is also an additional contact on the contactor is employed across the start button as a hold in contact. For example, the contactor used is electrically latched based and closed whereas the motor is working.

Overcurrent faults occur mostly and mainly due to ground faults and short circuit faults. When such type of fault occurs at any place a large amount of leakage current start to flow from the circuit and can cause huge damage to not only in the system but also someone’s life. Therefore, fuses and circuit breakers are used that show quick response towards fault when such type of fault (large) current passes from the system. That’s why to protect the system from the short-circuiting and also from the overload current we use MCCB’s or Fuses of specific ratings.

When the amount of current larger than the rated current of the device passed through the system such devices operates and open the circuit until the fault is removed from the system. We can also say that when a little higher amount of current beyond the rating of motor pass Overload protection starts operating and prevent the machine from any hazard. If the overload current persists for a long span of time then things and machines get damaged. Overload protection doesn’t trip even if a high value of current flows for a short span of time such as the starting of the motor. Overcurrent protection rating is always selected with so much care that it must provide enough protection against high current and also it must allow enough current without operating the overcurrent protection for the motor to operate under heavy mechanical load.

Whenever motor draws too much amount of current to fulfill the load demand and if load demand goes beyond the allowable limit, such condition or situation is called as Overload. An electric overload occurs when an excessive amount of current passes through electric wires or from motor windings. The wires or windings can heat and melt, with the risk of starting a fire. Therefore, overload protection is used in it. It is basically a type of safety protection when the motor draws too much current or overload current and causing the overheating of the electrical machine. So that’s why we use a different kind of overload relays to avoid the system or machine from overheating due to the excessive amount of current drawn for a too long period. Sometimes motor starters come with built-in overload relay. 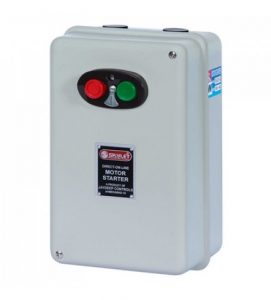 DOL Starter basically comprises of only two buttons one of them is ‘green’ and other is ‘red’.‘Green button is used for starting and ‘Red’ button is used for stopping the motor. The Direct ON Line Starter actually consists of a contactor, an MCCB or circuit breaker, and an overload relay for protection whenever a fault condition occurs. The above mentioned two buttons ‘stop’ and ‘start’ or also called as ‘Red’ and ‘Green’ buttons are used to control the contacts. For starting the motor, we press Green Button and the contact is closed and therefore full line voltage start appearing across the motor. Contactor can either consist of 3 poles or 4-pole depend upon the design. In our case, the contactor used is of 4-pole type. There are three “Normally Open” contacts from where the motor is connected to the supply lines, and the fourth one contact is called as “hold on contact” that is an additional contact and this one energize the contactor coil after the start or green button is released. The additional coil gets de-energized if there is any fault occur and then starter disconnects the motor from supply mains.

The wiring of Direct ON Line control circuit starter is following:

The connection of contactor can be done among relay coil, supply voltage as well as thermal overload. 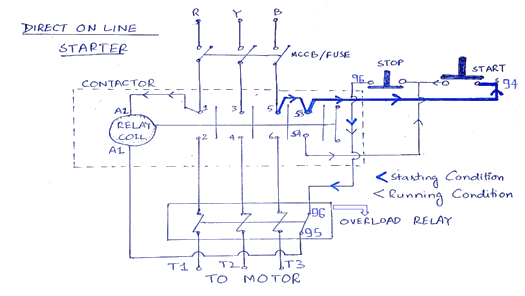 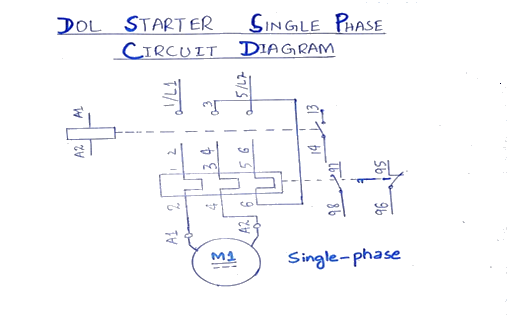 (i) DOL starter wiring connection with start and stop buttons are shown in the above figure (1). Between the mains supply terminals and motor terminals the DOL starter main terminals are connected and with the two terminals of the three-phase power supply as described in figure (1) the control circuit is energized.

(ii) Current will flow through one phase to the control circuit and the contactor coil to the other phase when the start button is pressed. Contactor coil gets energized due to this current that makes to close the contacts of the contactor and in the result of this three-phase supply is connected to the motor. The start button is sometimes called as push button because when this button is released the control circuit of DOL starter still provide the power supply via Hold-On-Contact. The current path via contactor coil will break when the stop button is pressed and due to this the contactor contacts drop out, thus breaking the power supply to the motor. We can also say that the overload relay coil operates.

(iv) Remotely operated DOL starters are also used for control the switching of the motor from any desired place. But there is a condition for remote control based switching that one should know, that all the remote “OFF” push buttons always be connected in series with “OFF” pushbuttons of the starter and vice versa (all the remote “ON” push buttons always be connected in parallel to “ON” pushbutton of the starter).