You are here: Home / Basics / Working and Applications of Common Collector Amplifier

An amplifier is an electronic circuit that is used to amplify the voltage signal or a current signal. The amplifier circuits are generally designed with one or more transistors. A BJT or a FET transistor is a major component of the amplifier system. They can be categorized into a weak signal amplifier or a power signal amplifier and are used in wireless communication and broadcasting, and audio equipment. This article discusses the common collector amplifier which is the amplifier topologies.

The common collector amplifier is one of the three basic BJT amplifier topologies. In this circuit, the base of the transistor serves as an input, emitter as the output and the collector is grounded that is, common for both emitter and base. It is also called as an emitter follower. This configuration acts as a buffer. This circuit provides offer low output impedance while taking high input impedance. This configuration is mainly used in digital circuits with logic gates and has many applications.

The load resistor in the common collector amplifier being placed in series with the emitter circuit receives both the base current and collector currents. 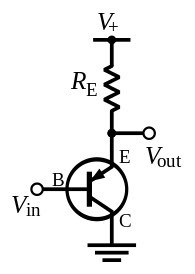 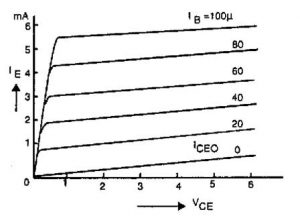 The current gain is defined as the ratio of the load current to the input current.

From the h-parameter circuit, it can be determined that the emitter and base currents are related to the dependent current source by the constant hfe+1. The current gain is dependent only on the BJT characteristics and independent of any other circuit element values. Its value is given by

The input resistance is given by

This result is identical to that for a common emitter amplifier with an emitter resistor. The input resistance to a common collector amplifier is large for typical values of the load resistance Re.

Replacing each term with its equivalent expression

The above equation is somewhat less than unity. The approximation equation of voltage gain is given by

The overall voltage gain can be defined as

This ratio can be directly derived from the voltage gain Av, and a voltage division between the source resistance Rs and the amplifier input resistance R.

After substitutions of appropriate equations, the overall voltage gain is given by 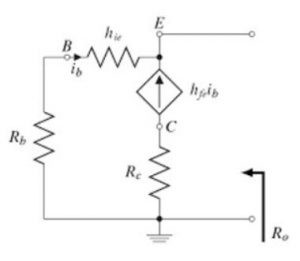 If a voltage v is applied to the output terminals, the base current is found to be

The total current flowing into the BJT is given by

The output resistance is calculated as

The output resistance for a common collector transistor amplifier is typically small.

This article discusses the working of the common emitter amplifier circuit and its applications. By reading the above information you have got an idea about this concept. Furthermore, any queries regarding this article or if you want to implement Electrical and Electronic projects please feel free to comment in the below section.