There are numerous ways through which electricity can be produced but the major supply of electricity throughout the world is through thermal power plants. However, some chunk of electricity is wasted while transmission in power transmission lines etc. In traditional power plants, the efficacy is only 35 percent, however, remaining 65 percent of energy is lost on the way of transmission. Heat which is rejected to the surrounding environment is one of the major sources of loss of energy produced. Moreover, some of the electrical power is also lost while the transmission of energy through transmission lines. 15 to 20 percent of losses are further associated with the distribution of produced electrical energy from the grid. 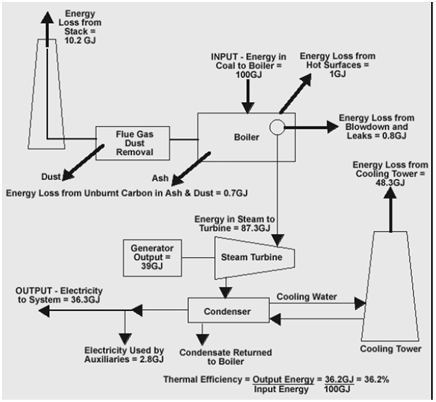 The CHP (Combined Heat & Power) definition is given above and is working on the basic principle to work out two different energies to get useful work from i.e. generation of electrical energy. One is the primary source such as mechanical energy power plant and the second is secondary source such as a thermal power plant. The mechanical energy might be utilized for driving an alternator for the production of electrical energy or any other equipment such as a pump, motor, or even compressor etc. for delivering useful services. The thermal energy can, however, be used for direct applications or for the production of steam or hot water for heating purposes. The cogeneration is delivering a huge range of technologies for various applications of different domains. The efficacy of cogeneration power plants is more than 80 percent and in some cases, it is even above 80 percent. The basic need for Cogeneration is to enhance the efficiency of power plants and to keep the overall cost to a minimum.

The technology of cogeneration has been commercialized these days and has included back/extraction pressure steam turbines along with a heat recovery boiler or heat turbine and interchanging engines having a boiler of heat recovery. The following are major types of cogeneration plant explained below in detail.\

There are two major types of steam turbines which are widely utilized for extraction condensation and back-pressure. Both types are shown in the figure below for generic overview and illustration. 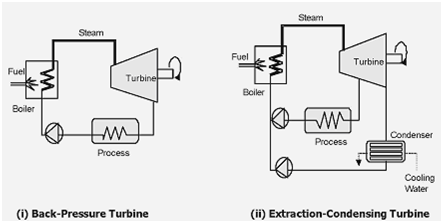 The sole choice amid extraction condensing and back-pressure turbines is only dependent on the quantity to which heat and power must be generated along with considering a few other economic factors. There can be more than one points of extraction of the steam turbine which depends on the temperature and heat levels required for processes.

There is another type of steam turbine which is known as topping-cycle cogeneration and is basically working on the principle of extraction-back pressure turbine which acquires energy from 2 different levels of temperature. The entirely condensed steam turbines are only utilized in the sites which are having heat rejection from the procedures for power generation.

There are numerous advantages of using steam turbines while compared to other prime movers because of having a variety of alternative and conventional fuels, for instance, biomass, coal, fuel oil, and natural gas etc. The efficacy of the generation of power from these plants might be sacrificed to a little extent for optimization of supply of heat. Whereas in the back-pressure cogeneration power plants, there is no requirement of cooling towers. The steam turbines are utilized in the cases where demand for electrical energy is higher than a Mega Watt up to few hundreds Mega Watts. 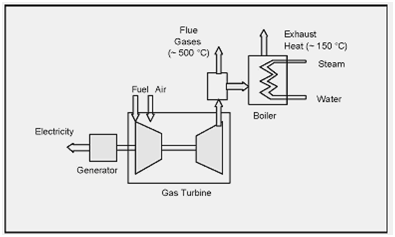 It is a fact that natural gas is the most common fuel used for electrical power generation. The gas turbine-powered stations range from a few MW till hundreds of MWs in a generation. The gas turbine cogeneration has seen rapid development in the past few years and has the greatest availability of natural gas having a significant reduction in the costs of installation and with a better performance which is environment-friendly. The gas turbines are having a very small startup time which delivers the system flexibility in the operation. However, these power plants are having lower efficacy of heat to power conversion but it is also a fact that more heat can be recovered at higher temperatures.

In the case where more power is required at a certain site, then there is a possibility for the adoption of combined cycle power plants by its combination to steam turbine etc. The steam is being generated from the exhaust gasses of the turbine which is then processed via back-pressure turbine for the generation of excess usable power.

These CHPs are also known as internal combustion engines and these cogeneration systems are having higher power efficacy than that of other types of prime movers. In reciprocating engine CHPs, there are a total of 2 mechanisms for recovery of heat i.e. the exhaust gases having higher temperatures and the engine jacket which is having a cooling water system. A simple reciprocating engine CHP is shown in the figure below.