You are here: Home / Electrical Machines / What is Damping Ratio : Formula & Its Derivation

It has been observed from the past twenty years that there happened many earthquakes all over the world which resulted in several fatalities and damages. These losses were because of the seismic excitation and resulted in both non-structural and structural catastrophes. So, it is important to enhance the seismic performance of the constructional structures. This can be done by implementing passive energy-dissipation and this provides improvised solutions for building structures and reduces the result of seismic activities. Since then the significance of damping has increased and now this article explains damping ratio, its formula, derivation, its significance, and related concepts.

What is Damping Ratio?

Damping is considered as the impact which is exhibited either internally or upon the oscillatory system which results in the elimination or reduction of oscillation. In the physical approaches, damping is generated because of the procedures that dissipate the accumulated energy in the oscillation. This is not dependent on the energy loss but sometimes it is even crucial in the case of other oscillating systems like those that happen in automobiles and biological systems.

Whereas damping ratio definition is expressed in the way that it is a dimensionless measurement that states how system oscillation will decay after having a disturbance. It can be observed that in many scenarios when a system is disturbed from its actual position of static equilibrium, then they show oscillatory behavior.

For example, the most observed scenario is the amplitude degeneration at the time of vibration in a singing bowl. The amount of decay is based on the extent of damping. The vibration amplitude has an exponential reduction corresponding to time.

And the system’s equation of motion is given by

and the critical damping coefficient is given by

This can also be represented as

Here, ωn corresponds to the natural frequency of the system which is given by Ök/m

This is the damping ratio formula.

Using the definition of damping ratio and natural frequency of the oscillator, we can write the system’s equation of motion as follows:

This is the basic mass-spring equation which is even applicable for electrical circuits as well. This is resolved as follows:

Here, C and s represent complex constants. Where ‘s’ is given by

Considering the above equation, there are many levels of damping and those damping levels are explained as below:

For the situation ζ = 0, it represents an undamped fundamental harmonic oscillator and the result here is exp (i ωn t)

Considering both the + and – solutions for ‘s’ value, then every complex term is considered as a decaying exponential along with the oscillatory portion where the term is exp (i ωn Ö1- ζ2). This is the situation that occurs when the value of ζ lies between ‘0’ and ‘1’. This scenario is referred to as underdamped.

When the term ‘s’ is a couple of real values, then the result is a combination of two decaying exponential terms having no oscillation. This situation takes place when the value of ζ is greater than ‘1’. This scenario is referred as overdamped.

Here, the value of ζ equals ‘1’ and this is the boundary condition in between underdamped and overdamped conditions. This is the result in many situations where the engineering design of a damped oscillator is necessary.

With this, the time response of the 2nd order control system can be known.

To know the damping ratio and its performance in the second-order system, the time response has to be known and it is explained as follows:

To know this, the open-loop transfer function ωn2/ [s (s + 2 ζωn)] is connected with a feedback loop that has a gain of one.

When the open loop transfer function is substituted, then

In the above equation, the power of ‘s’ is two and so the system is termed a second-order system. The characteristic equation is

Considering the above equation, the damping ratio performance can be known,

This is the procedure of how to find the damping ratio of a second-order system.

To know the performance of damping ratio in closed-loop systems, one has to contemplate multiple scenarios which are given below:

The below graph represents the relation between damping ratio and bandwidth frequency. 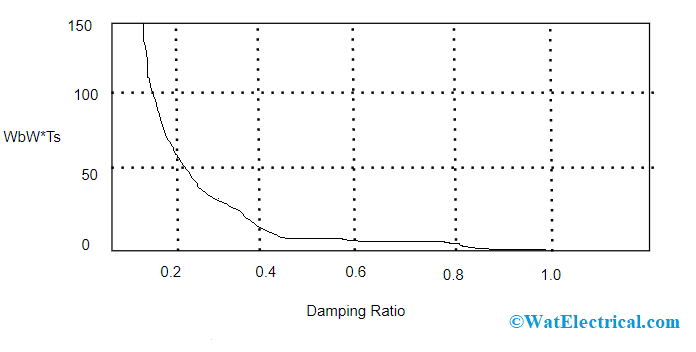 The amount of damping present in the system is used to know the oscillatory performance of a system. And this is the main significance of damping.

In the control systems, overshoot corresponds to the output which is more than the final steady-state value. In the case of step input, PO (percentage overshoot) is the maximum value with the difference of step value and divided by the step value. This is expressed as

And the converse of this, damping ratio that produces a given PO is expressed as: 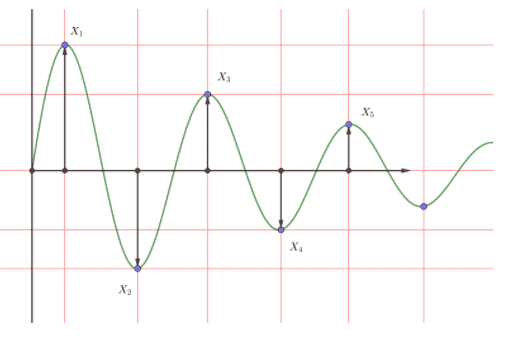 Based on the below picture,