You are here: Home / Basics / Methods of Speed Control of a DC Motor

The basic principle of the DC motor is a device which converts DC energy into mechanical energy. When the current carrying armature  is connected to the supply end though commentator segment, brushes are placed within the North South Poles of permanent or electromagnets. By using these electromagnets operating principle is depends on the Fleming’s left hand rule to determine the direction of the force acting on the armature conductors of the DC motor.

Speed of a DC motor can be varied by varying flux, armature resistance or applied voltage. Different speed control methods for different DC shunt and series methods are there.

In this flux control method, speed of the motor is inversely proportional to the flux. Thus, by decreasing flux and speed can be increased vice versa. To control the flux , he rheostat is added in series with the field winding will increase the speed (N), because of  this flux  will decrease. So, the field current is relatively small and hence I2R loss is  decreased. This method is quite efficient. 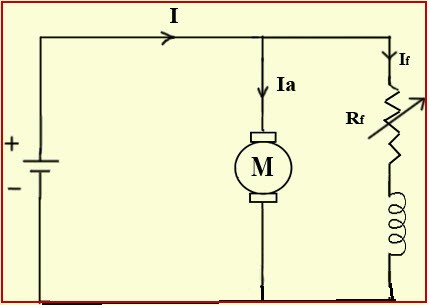 This armature control method is based on the fact that by varying  the voltage across the required voltage. The motor back EMF (Eb) and Speed of the motor can be changed. This method is done by inserting the variable resistance (Rc) in series with the armature. 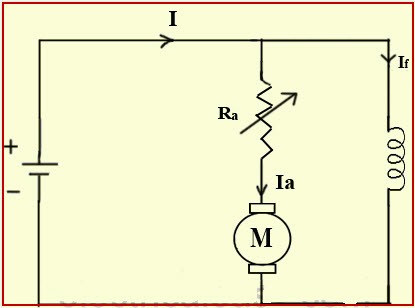 Multiple Voltage Control: In this method, the shunt field is connected to a fixed exciting voltage, and the armature is supplied with different voltages.  So the Voltage across armature is changed with the help of a suitable switchgear devises. Armature speed is approximately proportional to the voltage across the armature.

Ward-Leonard System: This Ward –leonard system is used where very sensitive speed control of the motor is required (e.g electric excavators, elevators, etc.). The arrangement of this system is as required in the figure shown below. 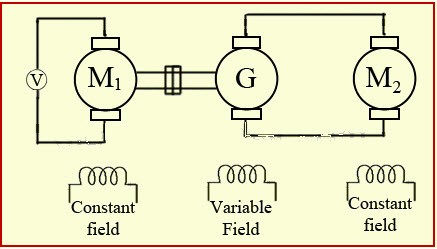 Field Diverter : A Rheostart is connected parallel to the series field as shown in fig(a). This variable resistor  is also called as a diverter, as desired value of the current can be diverted through this resistor and hence current through field coil can be decreased. Hence flux can be decreased to desired amount and speed(N) can be increased.

Armature Diverter : Rheostat (Divider) is connected across the armature of the coil  as shown in fig (b). For a given constant load torque, if armature current is reduced, then flux must increase. As armature torque Ta α ØIa. This will result in an increase in current taken from the supply and hence flux Ø will increase and subsequently speed of the motor will decrease.

This tapped field control method is  shown in fig (c). In this method, field coil is tapped dividing the number of turns. Thus we can select different value of Ø by selecting a different number of turns. In this method flux is reduced and speed is increased by decreasing the number of the turns of the series field winding. The switch S can be short circuit any part of the field winding, thus decreasing the flux and raising the speed (N) with full turns of coil.

Paralleling Field Coils: This is used for fan motors several speed can be obtained  by regrouping the field coils in series with the DC armature.

In this method, an introducing resistance (R) is series with the armature of motor.The voltage across the armature can be reduced. So the speed reduces in proportion with it. It is seen that for a 4 pole motor, the speed of the motor  can be obtained easily.

Please refer to this link to know more about Elevator.