You are here: Home / Electrical Circuits / What is a Microbial Fuel Cell : Components & Its Applications

In the current world, we have been observing huge global energy catastrophes because of massive energy demands and the availability of only a few resources. This crisis happens because non-renewable resources are getting exhausted and renewable sources are not appropriately utilized. This creates a quick demand for searching alternate options for energy generation. And one of the options in microbial fuel cell technology. The thought of using microbes for electricity generation was started in the early 20th century by Michael Potter in 1911. This article deals with the explanation of what is MFC technology, how it works, what are the components involved, and its applications.

What is a Microbial Fuel Cell?

An MFC is considered a device that is used for the conversion of chemical to electrical energy using microorganisms. These cells are constructed either by bioanodes or biocathodes or both. In many of the microbial fuel cells, both the anode and cathode sections are separated by a membrane because in anode oxidation happens and in the cathode, reduction happens.

The MFC can also be termed as a bioelectrochemical fuel cell that produces current by transferring electrons generated from oxidation on the anode to the oxidized compounds on the cathode using an additional electric circuit. It was known that the demonstration of the first MFC took place in the 20th century where it was utilized as a mediator which means that it was employed as a chemical that transmits electrons from bacteria to the anode.

Later on, in the 21st century, these fuel cells were also utilized for wastewater treatments.

An MFC has two designs where each of these works on different mechanisms. Every mechanism is dependent on the organisms that are used, wastewater source, and others.

In the double-chambered MFC, there are two chambers where these two are connected using a bridge that is made of either sodium or potassium salt. In this, salt agar is used as a bridge other than using dyes because dyes are considered as poisonous together with the microorganisms which are active electrochemically. Here, one container has wastewater or else water with microbes and the other container has salt/aerated wastewater/aerated water.

The container which has wastewater is kept at an anaerobic state which means there is no oxygen supply to the container and the caps are air sealed and have an opening slot only for methane and other kinds of gases generated by organisms. And the other container is completely kept at an aerobic condition where helps for oxygen generation for aerated/aerated wastewater.

As states that both the chambers are connected together by salt agar. The composition of salt agar is

This composition can be done as per the necessity, or the size required for salt agar. In both anode and cathode sections, a graphite electrode is used. The construction of microbial fuel cells in double-chambered design is shown as follows: 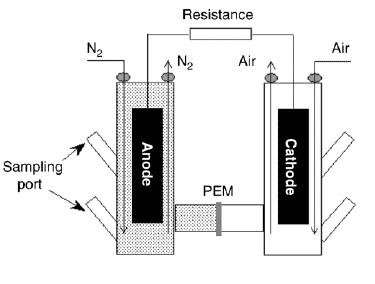 As there exists no salt bridge or dye for electron carriers, the efficiency in transportation of electrons is more and ions loss is very minimal. This single MFC needs the anodic section, and it has to be kept at an anaerobic state and then the cathode is moderately dipped in the fuel cell so that some part of the cathode gets exposed to oxygen.

Here the cathode and anode materials that are used are graphite and copper. And the substance which is used for constructing the entire container is polystyrene and copper is totally dipped into the cell and from this current generation takes place through a wire connection. The below picture shows the single-chambered MFC construction. 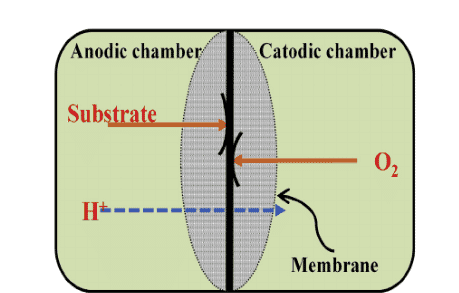 How do MFC’s Work and Generate Electricity?

The working of microbial fuel cells takes place by letting bacteria operate as they need which means they undergo oxidation and reduction of organic particles. The respiration process of bacteria is fundamentally considered a redox process where the movement of electrons takes place. When there is electron movement, some potential is generated for utilizing EMF in order to perform some operation.

As MFC contains anode and cathode sections partitioned by a membrane, microbes that are at the anode undergo oxidation and generate protons and these protons move through the membrane to reach the cathode. And the protons which move from the anode to the external circuit generate electricity. The logic behind this is gathering the electrons released by microbes as they undergo respiration.

There are various types of microbial fuel cells, and this section explains clearly each type of MFC.

Mediated MFC – Here, the type of microbial cells which are used in an electrochemically inactive nature. The transfer of electrons from microorganisms to electrodes takes place with the mediators like neutral red, thionine, humic acid, and others. Many of the mediators are pricey and they are poisonous too.

Mediator-free MFC – The MFC’s used for electrons transfer has the nature of electrochemically active and the MFC’s used in this type can be Aeromonas, Shewanella putrefaciens, and many others. Few types of bacteria hold the ability to transfer electrons through pili which is present on their outer layer.

The MFC’s can function in wastewater and generate electricity from specific plants and oxygen. A few of the plant types can be algae, rice, lupines, cordgrass, and others.

Phototropic Biofilm – This type of MFC employs a phototrophic biofilm anode which consists of photosynthetic orgasms like candyanophyta and Chlorophyta. Using the process of photosynthesis, the MFC’s generate organic metabolites and provide electrons.

Soil-based MFC – The functionality of soil-based MFC follows the same as general MFC where soil functions as an anode and the anodic elements are proton exchange membrane and inoculum. The location of the anode is at some depth in the soil whereas the cathode location is on top of the soil, and it is exposed to the atmosphere.

In general, soils abound with various kinds of microbes along with electrogenic bacteria required for MFCs. Also, microbes that exhaust oxygen exists in the soil and these operate as oxygen such as costly PEM components so that the redox ability of the soil diminishes with more depth.

In addition to these, the other types of MFCs are

Advantages and Disadvantages of MFC

The advantages of the microbial fuel cells are:

The disadvantages of the microbial fuel cell are:

There are a wide variety of applications of MFC. A few of those are discussed here:

On the whole, this is all about microbial fuel cell. The article has completely focused on explaining microbial fuel cell technology, its components, working, design, types, and applications. Also know, what are the substrates utilized in MFC’s?