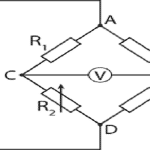 Even though the name Charles Wheatstone was popularized, the circuit was actually invented by a well-known mathematician Samuel Hunter Christie. And the circuit was described in the year 1883. The job done by Christie was not known to the public until Whetstone was introduced. Along with the publicity, there was a constructional improvement in the Wheatstone bridge. From them, the bridge came into more prominence, and it was implemented in many … END_OF_DOCUMENT_TOKEN_TO_BE_REPLACED