You are here: Home / Electrical Circuits / What is Wheatstone Bridge : Circuit, Working & Its Applications?

Even though the name Charles Wheatstone was popularized, the circuit was actually invented by a well-known mathematician Samuel Hunter Christie. And the circuit was described in the year 1883. The job done by Christie was not known to the public until Whetstone was introduced. Along with the publicity, there was a constructional improvement in the Wheatstone bridge.

From them, the bridge came into more prominence, and it was implemented in many applications. This article helps us in understanding Wheatstone bridge principles, circuit construction, its derivation, drawbacks, and applications.

What is Wheatstone Bridge?

The instrument that is employed to know the unknown resistance through comparison procedure is termed as Wheatstone bridge. By comparing with the value of known resistance, the unknown value is calculated. This device functions on the null deflection principle which means that the resistances ratio is equal and there is no current flow across the galvanometer. 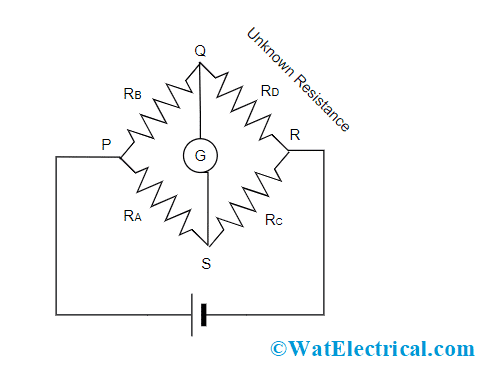 The device consists of four resistors named RA, RB, RC, and RD. As per the above picture, a voltage source is connected between two points (P and R) which are diagonally opposite to each other and this is considered as battery arm. And in between the other two points (Q and S), a galvanometer is connected to know the current values. The source connected between P and R points is the electromotive source. The amount of current that flows through the galvanometer is known by the level of potential difference which is applied to it. This is the construction of the Wheatstone bridge.

As discussed, the Wheatstone bridge works on the principle of null deflection. We know that a galvanometer is connected between Q and S, and when there is a flow of zero current through it, the bridge is considered to be in a balanced state. So, in this condition, the difference of voltage between Q and A is ‘0’. This corresponds that at the points Q and S, the voltage level is the same.

The balanced state is achieved by varying the known and variable resistance values. Even though in the normal state, for the state of unbalanced Wheatstone bridge some amount of current flows across the galvanometer.

Now, let us know the working procedure of the Wheatstone bridge.

Consider the below picture and it has four resistances A, B, C, and D with an EMF source. Then, two keys M1 and M2 are connected in between the terminals (P and R) and (Q and S). Initially, key M1 has to be connected and then M2 needs to be pressed. Check whether there is any deflection in the galvanometer or not. 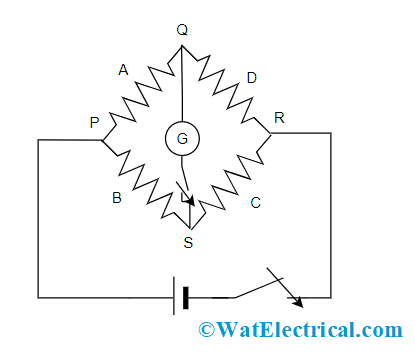 The arms QS and PR are considered as conjugating arms for the bridge due to the reason that when the Wheatstone bridge is in a balanced condition, and if the positions of battery and galvanometer are swapped, then this is shown no impact on the balanced state. The bridge holds increased reliability and gives precise outcomes.

As per KVL (Kirchhoff’s voltage law), the voltage drop in the closed-loop is ‘0’ which means the voltage across the loop PQSP is ‘0’. The potential across every resistor in the bridge equals the product of the current flow and resistance across it. So,

In the same, by applying KVL law at the loop RQSR, we have

By comparing the equations, we have

This is the term for a Wheatstone bridge in balanced condition.

From the above equation, the Wheatstone bridge formula can also be known which is given by

Where ‘C’ corresponds to the unknown resistance

Sensitivity of the Wheatstone Bridge

In the case of measuring instruments, the crucial aspect to be considered is the device sensitivity factor. The device that shows more sensitivity seems to have high reliability and delivers accurate results.

In general, Wheatstone strain gauge circuits are mostly employed in transducers for the conversion of mechanical strain into electrical signals. Like the basic Wheatstone bridge, the strain gauge Wheatstone circuit also has four resistors which are connected in a diamond format. Mostly, all the terminals are active which increases the transducer sensitivity whereas in some situations, two elements will be fixed resistors and the other two are strain gauges.

The connection points for all the four strain gauges help to provide power supply all across the circuit and are used for calculating the signal generated. 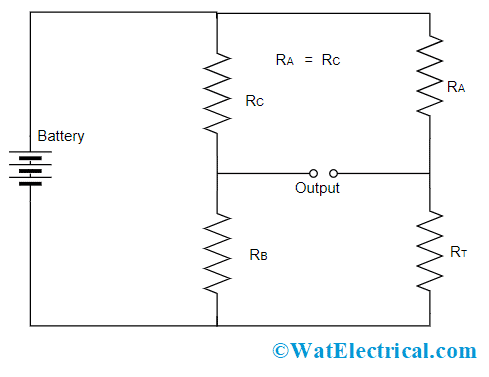 Selecting the correct value of resistors RB and RC eliminates the DC value from voltage change. Now, the below expression shows the relation between voltage and temperature where

Let us consider that RA = RC, then

With this, the relation between T and RT is represented as below:

So, with the above formula temperature can be measured using the Wheatstone bridge.

Even though T does not vary linearly with voltage, for minimal temperature change, this can be considered as a linear function and the errors can be eliminated.

By calculating a value using Wheatstone bridge, the device may show few errors and those are explained as below:

These are major errors in a Wheatstone bridge and these can be removed when proper galvanometer and resistors are used. Self-heating errors can be eliminated by noting the resistance value quickly and thermal errors can be reduced by reversing the switch connection in between the bridge and battery source.

The Wheatstone bridge applications are:

The Wheatstone bridge limitations are:

1). What is the null point in the meter bridge?

The meter bridge has a slide wire which is of length one meter and a consistent cross-sectional area. When the jockey moves across the wire, at the balanced condition it shows ‘0’ deflection and this is termed as a null pointer.

2). What is the use of a wheat stone bridge?

The prominent usage of the Wheatstone bridge is in measuring unknown resistance and also to calculate other factors like strain and temperature.

3). What is the condition for the wheat stone bridge?

The condition for a Wheatstone bridge to be in a balanced condition is there is no current flow across the galvanometer.

4). What is the difference between the ohmmeter and Wheatstone bridge?

In Ohmmeter, the preciseness is constrained by the device’s internal resistance whereas in the Wheatstone bridge there is a constraint on accuracy and precise measurements can be known.

5). What is the advantage of the Wheatstone bridge over the ohmmeter?

When compared with Ohmmeter, the Wheatstone bridge has the ability to measure even very minute variations.

6). What is connected between the two ends of a Wheatstone bridge?

In between the two terminals of the Wheatstone bridge, a battery is connected and in between other pairs of terminals, a galvanometer is connected.

7). How to calculate resistance in the Wheatstone bridge?

Initially, connect the series resistances and create an ideal circuit and there has to be no current flow through the central resistor. Then, using the formula R1=1R1+1R2 (in parallel condition).