You are here: Home / Basics / Direct and Indirect Methods of Testing DC Machines

In the early 1880s Oslen proposed to test the machine to invent some new and improvements in machines. In his proposal, he highlighted the difficulties he faced running any machine. Accordingly, he also proposed certain measures to be taken to avoid such difficulties. He suggested testing the machines to improve their performance and working difficulties. So, this is the reason why a machine is tested by different methods to know its behavior. There are different methods used for this testing we shall discuss those in this article. In this article, we shall also discuss the different testing methods used for testing of DC machines.

A direct test is applicable for small machines where some amount of load is applied to the machine. After applying the load the voltage and current values are noted. By analyzing these values, we can conclude the application of machine. The applied load on a machine is shown in the figure below. 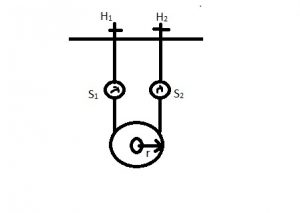 In the figure above, it is shown that a load is applied to the shaft of a machine by two handles arranged at the top. These handles H1 and H2 are used to tighten the belt which is attached to the pulley of the machine. These two handles are supported by two springs S1 and S2. Whenever the handles are twisted some load is put on the pulley and this force is measured by the springs S1 and S2.

where S1 and S2 = Spring force

There are some drawbacks to using this method. They are

This test is mainly applicable for conducting a No-load test. DC shunt machine is the best option for conducting No-test. During the No-load test, the current directly appears across the field winding of the DC series machine which results in the burning of winding. So, considering this case a DC series machine is not used for this test. Hence, the DC shunt is the best option as the field winding is connected in parallel to the armature. The circuit diagram that depicts the Swinburne test is shown in the figure below. 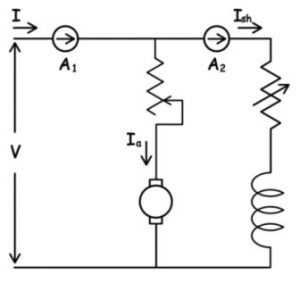 This method is best suitable for testing at No-load. It can be operated for large machines. The drawbacks of a direct test are overcome in this method. An ammeter is connected in series with the machine to find the current and the field winding in parallel with the armature. The parallelly fed field winding is connected with a variable winding such that as it is varied the current in the armature changes. This change is noted by observing the ammeter reading. Different readings are noted by varying the load at different points.

By this method efficiency at any point can be determined and this method is suitable for large-rated machines. But there are some drawbacks to this machine, it cannot determine stray load losses exactly.

Hopkinson’s test is also called a Regenerative test as a regenerative process takes place during this process. The drawbacks of the Swinburne test are overcome by this test. The circuit diagram that depicts regenerative testing is shown in the figure below.

The currents at different variations of load are noted to determine the efficiency and stray load of the machine.

Thus, in this article, we had discussed the different methods of testing the DC machines. These methods are used for testing to determine the performance of the machines at different load conditions to determine its usage at a suitable location. The different testing methods used are the direct test, Swinburne, and regenerative testing. Each type of method has its individual impact. The most important method among these is regenerative testing. Here is a question for the readers, What is the use of the Swinburne test and what is determined by conducting this test?