You are here: Home / Basics / What is a Water Tube Boiler – Explain its Construction & Working

A Boiler is a device that produces steam by boiling water. This boiling of water is classified into different to the machine. The steam from the boiler in turn rotates a turbine such that it drives a generator. This generator changes this rotational ME to EE. The amount of energy that is developed in this process to supplied to the bus bars. From Bus bars the energy is transmitted to several other areas through the transmission lines. In this article, we shall discuss what is a water tube boiler, mountings, and accessories required for the operation, types of water tube boilers, advantages, and disadvantages.

What is a Water Tube Boiler

Water Tube Boiler is a high-pressure boiler that operates at a pressure of about 165 bar. Basically, in this boiler, water will be flown inside the tubes surrounded by flue gases. More steam is generated by using this boiler so, the overall efficiency of the boiler is high. The water Tube boiler is shown in the figure below. 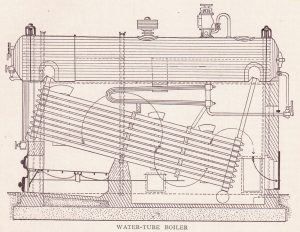 The boiler requires different types of mountings to be placed on the shell.

A pressure gauge is arranged to know the amount of pressure that is generated inside the tube. This instrument is also arranged as a safety precaution. We can know the amount of pressure that is exhibited inside. By timely observation of the pressure inside, we can make requirements to make the boiler operate consistently. There are different types of pressure gauge instruments available in the market such as Dail type and digital type. Depending on the requirement we can use its digital type is the most advanced type. The pressure is measured in terms of kgf/cm2.

The steam produced inside is an important factor for the production of electricity by the boiler. Due to the heating of water across the tubes steam is generated. If the steam is not controlled beyond its limit, it may also lead to damage. So, to operate the boiler within the permissible limits a steam stop valve is used.

It is a type of non-return valve used to stop the reverse flow of water from the tube.

There are different types of Water Tube Boilers. They are

The entire arrangement is enclosed in brickwork. A Stirling boiler has several drums and also a mud drum. Depending upon the requirement the number of drums is chosen. A Stirling boiler can work up to a pressure of 60 bar and the production of steam would be around 50000 kg/hr. The efficiency of this boiler will be around 60 – 80 %. The figure which depicts the Stirling boiler is shown below. 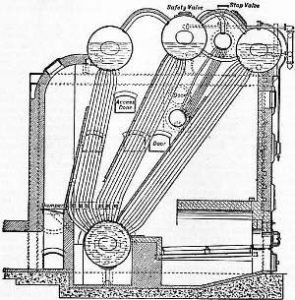 There are three drums placed at the top and each of these three tubes is connected to the mud drum by some bent tubes. The reason for using bent tubes is to avoid thermal stresses. The topmost three drums are connected by circulating and equalizing tubes. Circulating tubes are used to circulate water equally among the three drums and equalizing tubes to maintain an equal amount of steam in the drums. The first drum is connected with a steam stop valve. Similarly, the second drum with a pressure gauge and third drum with a feed check valve. The mud drum is connected with a blow-off valve. The feed water is provided by the feed check value which comes to the mud drum. The path of flue gases from the combustion of fuel is increased by using Baffle plates.

The Feed Water is allowed inside the drum by a feed check valve. The water travels to the mud drum where any unwanted particles will get settle at the bottom of the mud drum, which will be eliminated by a blow-off valve. The rest of the water will move towards the other two drums. The water circulation is maintained by circulating tubes and steam pressure is maintained by equalizing tubes. The fuel that is burnt in the firebox over the grate produces hot flue gases that travel over the water tubes giving its temperature. For the proper passage of hot flue gases over the water tubes baffle plates are arranged. The heated water generates high-pressure steam used for the production of Electricity.

It is used in

It is a type of water tube that is horizontal, externally fired and the circulation is natural.

The entire arrangement is enclosed in an Ironed structure (welded steel drum). The water tubes are inclined at an angle of 15°. This boiler is made of steel shell whose both ends are welded. A water level indicator, pressure gauge, safety valve, and manhole are the mountings used.

The water tubes are placed below the shell by support from the bottom at an angle of 15°. Baffle plates are arranged to increase the area of contact of flue gases with the water tubes.

An anti-priming pipe reduces the moisture (wet steam) in the boiler and sends the remaining content to the superheater. Superheater reheats the wet steam with the help of flue gases and sends it over the water tubes. Babcock – Wilcox boiler is shown in the figure below. 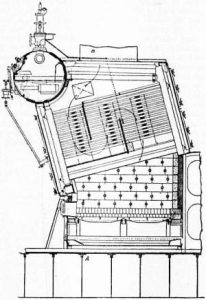 Working of Babcock and Wilcox Boiler

The fuel is burnt over the grate such that flue gases will be produced. These are naturally circulated over the water tubes. The heat of flue gases is transmitted to the water flowing inside the tubes. The water is sent into the tubes from the lower head whose density is higher as the water gets heated its density becomes lower and travels upwards to the upward header. The evaporated water is converted into steam which is sent into the shell. 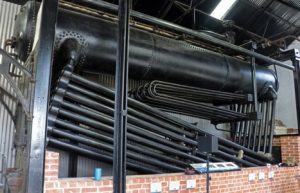 This boiler has a horizontal shell at the top and the water tubes are inclined at a particular angle. The feed water is fed to these inclined tubes. As the fuel is burnt in the burning area, heat is generated along with the flue gases. The flue gases will spread all over the surroundings. To increase the efficiency and steam production baffle plates are used which increases the spread of flue gases all over such that more steam will be produced.

If the steam produced is not sufficient then we can superheat by using a super-heater. The steam is re-circulated in the area surrounded by flue gases to increase the temperature. The steam production is around 20 – 40 tons/hr and pressure 11- 17 bar.

The cold air blower connected to the air preheater supplies cool air which is heated by hot flue gases in the air preheater. The hot air will be used inside the furnace. The feed water blower pumps water into the economizer where the water will be heated and sent to the radiant superheater. Then, radiant superheater partially water will be converted to steam which is sent to the convective superheater. Here, the partially converted steam is completely converted to steam. The steam thus produced drives the prime mover which generates electricity.