You are here: Home / Basics / What is Load Factor : Formula and Its Methods

At present, everything is dependent on electricity from mobile phones to every electronic device used in daily. Because day by day the demand for electricity is increasing and there are efficient and better ways are available for generating electricity through Power Plants. The electricity usage can be observed annually in a 24-hour format & the demand for peak load can be noted to examine. Because of doubtful demands by the consumer regarding power, the sum of load on the power plant changes frequently. For an instant, in the summer season, the electricity demand increases hugely like everyone uses AC (air conditioning) units. However, in the winter season that demand will be less because AC units are not used frequently. Apart from the demand, different kinds of power sources must be capable to meet the necessities immediately.

What is the Load Factor?

The load factor is defined as the proportion of average demand to the maximum demand.

Load factor = Average demand/maximum demand. The figure gives the data of peak demand observed during a 24-hour duration by comparing power in KW with respect to time in hours.

The load factor is given as electrical energy consumption in KWh / Peak demand * no of hours in a given period.

How to Improve Load factor

Methods to be Implemented to Improve LF

The monthly electrical energy consumption of an industry is 18000Kwh and the maximum demand is 50KWh. Calculate the Load factor?

From the above calculation, we can notice that consumers utilized (18000KWh) of the total energy available (36000KWh) which is 50%.

The LF of the power system is shown below. Calculate the Load factor? 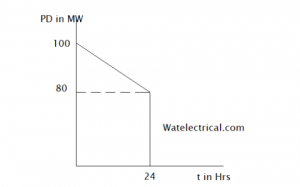 Average demand = No of units consumed /Total no of hours in a given period.