The first starter was created by Coleman in 1903 he is an American scientist. Later, in 1911 Kettering and Henry M. Leland further conducted experiments on the starter. In 1911, they invented an electric starter that can be used to start the electric machine. This motor is simply considered as the starter motor which is used to give power to the engines in vehicles. The electric starter finds its application mainly in the case of the automobile industry. But in the case of electricity, the electric starter we use is of different operation. This starter is used to limit the initial current that is carried to the motor. We shall discuss in detail about this topic in this article. In this article, we shall discuss what is a Four-point starter, its principle, construction, operation, and applications.

What is a Four-point Starter?

A question arises what is the need for using a 4-point Starter, it decreases the huge amount of current that occurs during the initiation of any motor. It is a type of starter used for the protection of the device by not allowing excess current to pass the inner parts. Typically it consists of four points this is the reason it is termed as the 4-point starter. These points are L (line), F (field), and A (armature). The Line is used for the giving supply, F is connected to the field, and A to the armature.  In addition to these 3 points, there is one more terminal that is neutral (N) linked to the No voltage coil. All these four L, F, A, and N collectively termed as the Four Points.

It works on the principle of electromagnetic attraction when current is passed the coil, it gets energized. This coil energized produces a flux that attracts the soft iron piece connected to the handle. When the handle is able to move, we can limit the current by adding additional resistance in series with the circuit. By the addition of this resistance, the current is opposed such that the current is limited. 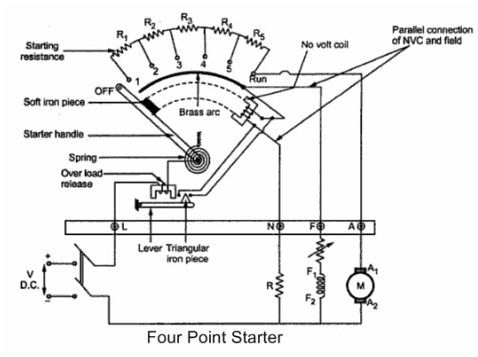 Difference between Three-point and Four-point Starter