You are here: Home / Electrical Machines / What is Function Generator : Block Diagram & Its Applications

A function generator is one of the most useful devices in the electronic domain. In modern-day, electrical terminology, troubleshooting is the most important concept and the under analysis needs multiple controllable signals to simulate the normal functionality. This requirement is easily resolved by a function generator where they can provide various kinds of signals.

The first function generator was designed by Robert Brunner where is a minimal frequency device and aimed fundamentally at geographical analysis, servo testing, and vibration observations. Today, this article is going to explain function generators working, circuitry, types, and their benefits.

What is Function Generator?

A function generator is generally termed as a signal generator that gives multiple kinds of output waveforms (sine, square, sawtooth, and others) based on the input signal. The device also provides the option of adjusting frequency ranges between a few Hz to some 100KHz. This instrument is considered as so versatile because it provides various types of waveforms with different frequency ranges. The other feature of a function generator is its ability to offer variation in the shape of the wave, magnitude, offset, and frequency whereas a load is necessary before doing the adjustment.

In addition to adjusting the waveform characteristics, the device also adds an offset DC to the signal. In general, function generators function at minimal frequency levels whereas expensive models might function at high-frequency ranges. 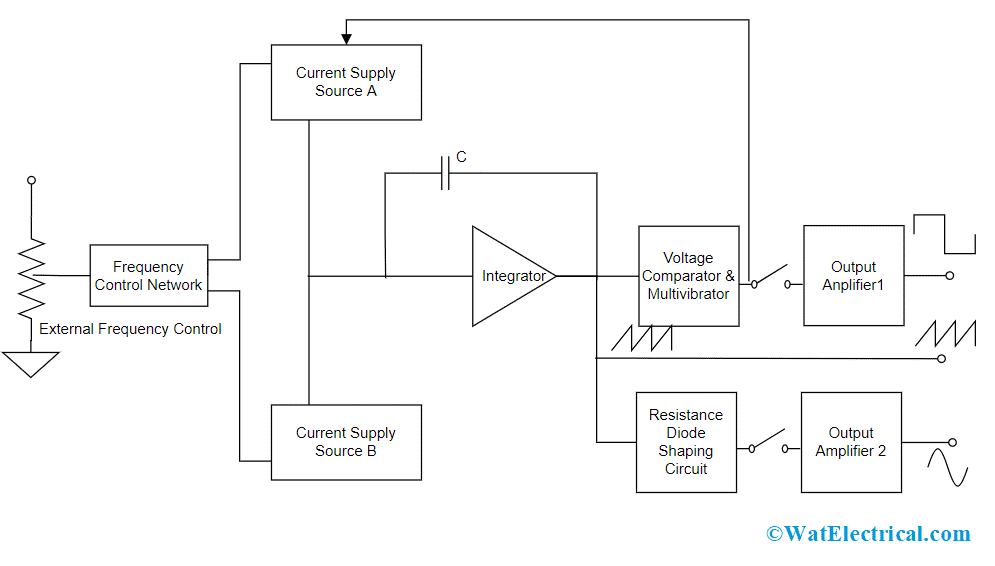 A constant current is provided to the integrator section using current source ‘A’ and because of this integrator’s voltage level increases in proportion with time. The below equation determines the linear increase in the output signal voltage.

Ang change in the current level either increasing or decreasing correspondingly changes the output voltage slope and thus regulates the frequency level.

Also, in the function generator block diagram, a voltage comparator, and multi-vibrator device is used where this triggers a change in the phase of the output voltage at the integrator at the previously defined peak level. As because of the change in phase, the current supply from source ‘A’ stops and source ‘B’ starts to supply power to the integrator. Because the source ‘B’ providing power, the integrator generates a reverse current. This reverse current results in a drop in the output of the integrator proportionally with time. Before this time, when the output reaches the maximum level, the comparator again alters its state and gets back to the current source ‘A’.

Therefore, the integrator output is a triangular waveform where its frequency is based on the current supply of both the current sources. And the comparator output is a square waveform. The circuit also has a resistance diode network that modifies the triangular wave slope having a minimum distortion of nearly 1%. And the amplifier at the output stage assists in providing two waveforms, thus the resultant signal is observed using an oscilloscope. 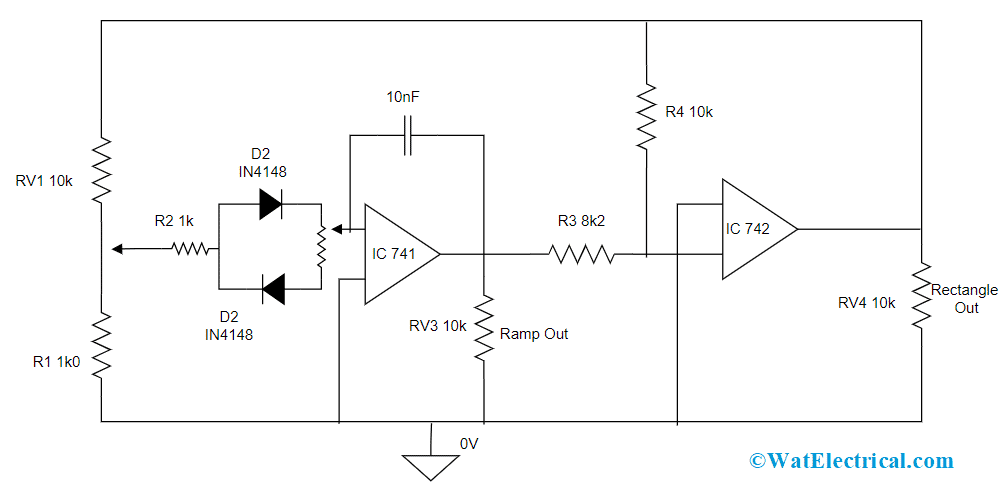 This is the function generator working explaining with the block diagram.

As discussed, function generators hold the capability of generating multiple waveforms, and those are explained as below:

Pulse Waveform – The pulse waveform is similar to the square waveform, but it has a space ratio of 1:1. This wave is generally used for digital kind of applications.

Triangular Waveform – This signal proportionally moves in between low and high levels. This output is produced by an operational amplifier performing as an integrator. The output from a triangular wave generator can also be a square wave and this is employed as a fundamental for the generation of other kinds of waveforms. This is also utilized in testing amplifiers because the levels of clipping and distortion can be clearly noticed in a triangular wave when compared with a sine waveform.

Sawtooth Waveform – This is also considered as a type of triangular wave, but the variation is it has sharper rising edges than that falling edges, and this makes the waveform shape to be a sawtooth. The same triangular wave generator can be used for the production of the sawtooth waveform, but the only difference is different falling and rising times formed by varying the rate of charge for rising and fall elements.

Apart from providing the selection of fundamental waves, a function generator can even provide multiple controlling options and those are discussed below:

This section explains the technical specifications for a general type of function generator.

As the progress of technology moving forward, there are various types of function generator which suits even for the current digital technology and the types are as follows:

Rack-based type – This is like a component present inside the rack system such as PXI. This main usage of this type of function generator is testing the applications and it has a slot that is used either for controlling or linking to the computer. Cards used for testing the instrument are placed into the slot thus making the test system to be ready for testing any specific application.

The testing cards can be of any kind of testing devices like oscilloscope, voltmeter, ammeter, and others.

Computer-based type – This is a distinct process where it uses a software-dependent computer to offer the necessary waveform types and then employs digital cards of the computer audio for the wave. Even this approach is not expensive, it may not hold the ability for delivering high accuracy when compared with other types of function generators.

And if there is any damage in the output because of misconnections or testing results, this leads to high expensive repairs.

Benchtop type – This is the extensively used type of function generator. The testing components are present in the box which is placed in the lab workbench. The testing equipment is controls, power supply, a connector to connect the output and display.

And these are the main function generator types.

There are extensive uses of a function generator across multiple domains and those are: