You are here: Home / Electrical Circuits / What is DC Amplifier : Circuit Diagram & Its Applications

An amplifier which is simply termed as the amp is the most essential component in the electronics industry. Not only the amplifier boosts the signal level, the device even delivers an enhanced quality of the input signal. To boost up voltage level, preferably transformers are used, while a relay is utilized for switching ON or OFF of electric pulses. And to magnify the range of fluctuating signals, transistor-based amplifiers are used. So, we are implementing the purpose of amplifiers in almost every purpose. And today, this article describes DC amplifier (Direct Coupled), their characteristics, working phenomenon, circuit, applications, and benefits.

What is Direct Coupled Amplifier?

A DC amplifier is the device where the output one stage is directly coupled to the input od the next stage so that even zero range of frequency signals are permitted. For the amplification purpose of a minimal range of frequencies, like thermocouple or photoelectric currents, these DC amplifiers are used. As the name itself specifies that, there is no need of any kind of coupling device to couple input and output stages.

The characteristics of dc amplifier include the following.

And the working of the DC amplifier is explained as that upon the application of input signal at the transistor T1 base end, it undergoes amplification because of transistor’s action and the output is delivered at the collector end f the T1. Then the output of T1 is applied as input to T2 and it undergoes further amplification. So, in this manner, DC amplifiers amplify signals through the direct coupling. To be clear, when the positive half cycle is applied as input to T1, it forward bias the signal and delivers an inverted signal at the output where

This inverted signal is applied as input to T2 and this is self-biased as because they are in cascaded connection. The base-end of T2 will not conduct and it again reverses the applied input signal. When T1 does not undergo conduction, then the voltage drop across CE junction will be null, then VCC quals to ICRC.

The direct-coupled amplifier circuit can be shown as below: 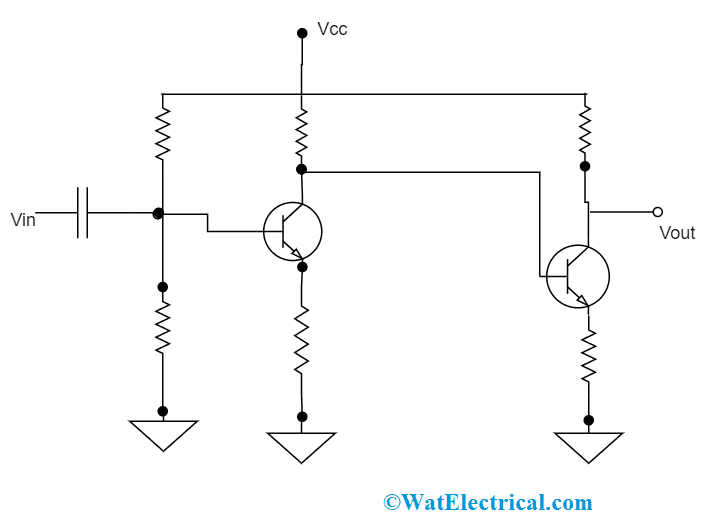 Of all the entire amplifier topology, the most implemented kind of amplifiers is a direct-coupled class A amplifier. The constructional design of this kind is very simple as they use only one switching transistor either IGBT, bipolar, or FET. As the transistor is biased all about the scope of Q point inside to the load centerline, it will never move either into saturation or cut-off positions. This scenario allows the conduction of current all through negative and positive cycles of input. The disadvantage that is in this type of amplifier is that the output transistor will never goes into OFF mode.

These are considered as the best because of their linearity conditions, excellent gain, and also the minimal level of distortion. Even these are less considered for high power amplification purposes, direct-coupled Class A amplifiers are the best of all. The best-implemented application of this kind is in increased fidelity of audio amplifiers.  The circuit is shown below:

In order to maximize gain and linearity levels, the output phase should be in ON condition’. When the null signal idle current value in the output section is either greater than or similar to the load current, then the amplifier is considered as class A. As this kind of amplifiers functions in the linear segment of the performance curves, then the one output device allows conductions all through the waveform which makes this device similar as the current source. The frequency response curve is: 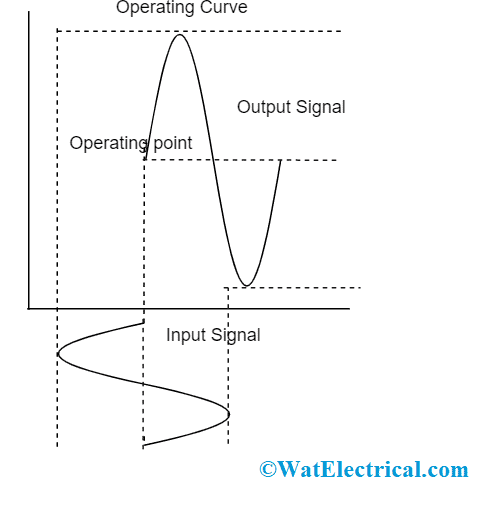 Frequency Response Of Class A Amplifier

As DC class A amplifiers functions in the linear region, the base-end of the transistor has to be selected correctly to make sure for proper functionality and minimal distortion. Even because of this added benefit, there is a major disadvantage that continuous ON condition of output transistor leads to power loss. As because of this power loss, the amplifiers generate an extensive amount of heat and thus reduces the efficiency by 30 percent. This impacts on high-power applications. Also because of maximum idling current levels, the power supply has to be chosen correctly and proper filtration has to be done to eliminate any kind of noise and distortions.

Apart from having more benefits, DC amplifiers also have disadvantages and those are

When various coupling methods like a transformer, direct and RC couplings are

Few of the applications of DC amplifier are:

So, this is all about the detailed concept of direct-coupled amplifiers. As because of many advantages these stand as fundamental for many amplifiers and for many electronic instruments. To gain more knowledge related to this concept know Why DC amplifiers hold more prominence and what are the frequency response of DC amplifiers?