You are here: Home / Power Electronics / What is a Power MOSFET : Basics, Working and Its Applications 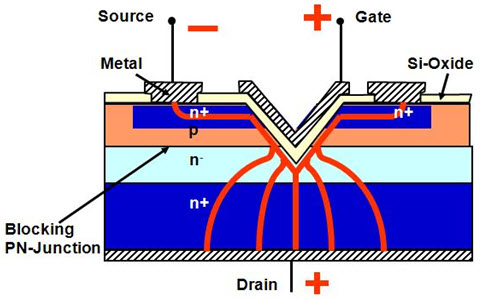 What is a Power MOSFET?

A power MOSFET is a special type of metal oxide semiconductor field effect transistor. It is specially designed to handle high-level powers. The power MOSFET’s are constructed in a V configuration. Therefore, it is also called as V-MOSFET, VFET. The symbols of N- channel & P- channel power MOSFET are shown in the below figure. 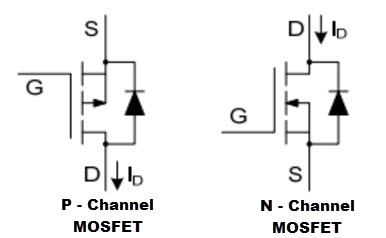 There is three basic status in the power MOSFET which is following.

RJFET is the detrimental effect of the cell size reduction. The P implantation is observed from the gate of a parasitic JFET transistor and it has reduced the width of the current flow.

Rn represents the epitaxial layer and it is used for sustaining the blocking voltage. This resistance is directly related to the voltage rating of the device. The high voltage MOSFET requires a thick low dependent layer which is highly resistive and a low voltage transistor requires a thin layer with the higher doping layer which is very less resistive. This is the main factor for the resistance of high voltage MOSFET.

The power MOSFET is equivalent to the PIN diode, if it is in the OFF state and it is initiated by the P+ diffusion, the N- epitaxial layer and the N+ substrate. This structure is reverse biased when it is highly nonsymmetrical structure and the space charge region extends principally to the lightly doped side, which is the N- layers.

Even though, when the MOSFET is in the ON state, there is a no function of the N- layers. Moreover, it is lightly doped rejoin, intrinsic resistivity is non-negligible and it is added to the MOSFET ON- state drain to source resistance. 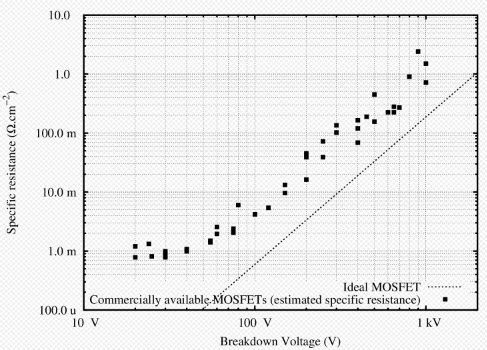 The body diode can be seen in the following figure that the source metallization is connected to both the N+ and P implantations. Even though the basic principle of the MOSFET requires only that the source should be connected to the N+ zone. Thus, this would result in a floating P zone between the N-doped source and drain. It is equivalent to an NPN transistor with a nonconnected base. Under some conditions like high drain current, in the order of the same volts of an on-state drain to source voltage, this parasitic transistor of NPN should be triggered and make the MOSFET uncontrollable. 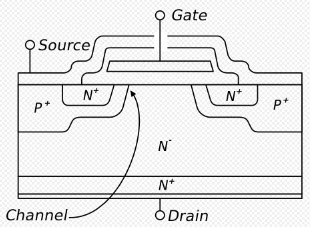 The connections of the P implantation to the source metallization short the base terminal of the transistor parasitic to its emitter and it prevents the latching. Hence this solution creates a diode between the cathode & anode of the MOSFET and the current blocks in one direction.

For inductive loads, the body diodes utilize the freewheeling diodes in the configuration of H Bridge & half bridge. Generally, these diodes will have a high forward voltage drop, the current is high. They are sufficient in many applications like reducing part count.

Working of Power MOSFET and Characteristics

The construction of the power MOSFET is in V-configurations, as we can see in the following figure. Thus the device is also called as the V-MOSFET or V-FET. The V- the shape of power MOSFET is cut to penetrate from the device surface is almost to the N+ substrate to the N+, P, and N – layers. The N+ layer is the heavily doped layer with a low resistive material and the N- layer is a lightly doped layer with the high resistance region. 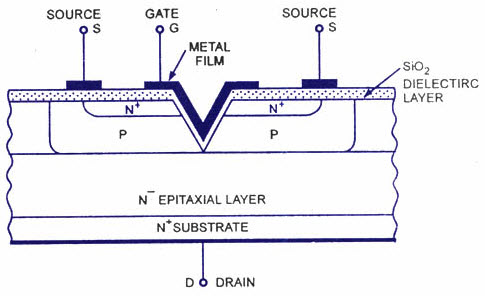 Both the horizontal and the V cut surface are covered by the silicon dioxide dielectric layer and the insulated gate metal film is deposited on the SiO2 in the V shape. The source terminal contacts with the both N+ and P- layers through the SiO2 layer. The drain terminal of this device is N+.

The V-MOSFET is an E-mode FET and there is no exists of the channel in between the drain & source till the gate is positive with respect to the source. If we consider the gate is positive with respect to the source, then there is a formation of the N-type channel which is close to the gate and it is in the case of the E-MOSFET. In the case of E-MOSFET, the N-type channel provides the vertical path for the charge carriers. To flow between the drain and source terminals. If the VGS is zero or negative, then there is no channel of presence and the drain current is zero.

The following figures show the drain & transfer characteristics for the enhancement mode of N-channel power MOSFET is similar to the E-MOSFET. If there is an increase in the gate voltage then the channel resistance is reduced, therefore the drain current ID is increased. Hence the drain current ID is controlled by the gate voltage control. So that for a given level of VGS, ID is remaining constant through a wide range of VDS levels.

In the geometry of power MOSFET, there is an important factor which is the presence of lightly doped, N- epitaxial layer which is close to the N+ substrate. If the VGS is at zero or negative, then the drain is positive with respect to the source and there is a reverse biased between the P- layer & N- layer. At the junction the depletion region penetrates into the N- layer, therefore it punch-through the drain to the source are avoided. Hence, relatively high VDS are applied without any danger of device breakdown.

In the power MOSFET, there is available of P-channel. The characteristics are similar to the N-channel MOSFET. The direction of the current and voltage polarities are in reverse direction.

Please refer to this link to know more about FET MCQs

If the positive voltage is applied to the gate terminal of the Q7 transistor then it will conduct. Correspondingly transistor Q8 will conduct for the negative threshold voltage. To prevent the MOSFET output from the oscillating the gate resistors are used.

The power MOSFET’s are used in the power supplies

This article will give the information on the working principle of power MOSFET circuit and its applications. We hope by reading this article you have gained some basic knowledge and understanding about the power MOSFET. Here is the question for you, what are the functions of the power MOSFET?