You are here: Home / Basics / What is a Rotor – Types, Working, & Applications

The rotor was invented in the early 1800s and it was discovered by the naval officers R. P. C. Spengler and Theo A. van Hengel. Earlier it was used in Rotor dynamics for the encryption of files especially used in cryptography. The invention of this type is also supported by Gustaf de Laval who is working for the development of turbine machinery. This type was supposed to be called Laval type as per his name Gustaf de Laval. In this article, we shall discuss what is a Rotor, types of work, how it works and working principle behind it, functions, and applications.

What is a Rotor?

It is the rotating part of the machine. It is attached to a shaft that is connected with the key at the end as a lock. This rotating part is considered as the rotor that rotates inside a magnetic field when torque is developed.

The squirrel cage and slip ring IM differ only with respect to their rotating construction whereas the stator construction for both the machines is the same. A machine is made of laminations and these laminations made of the stator are of thinner and are made of thicker laminations. The conductors are made of copper and these are short-circuited on either side with end rings so that it forms a closed path. These bars are skewed to reduce the eddy current losses. These copper bars are also forged to increase the mechanical strength such that more current can pass through it. The copper bars are wound according to the requirement on the armature core and are considered as the winding which is shown in the figure below. 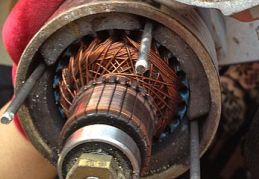 The reason behind the usage of only copper is we get less ohmic losses and the efficiency can also be increased. But if we use aluminum conductors it has high resistance, then ohmic losses will be more and the efficiency will be less. The commutator, armature, laminated soft iron magnetic core, shaft, winding, and ball bearing all collectively considered as a rotating part. Because all these internal parts collectively rotate inside the magnetic field. The core of this type is shown in the figure below. 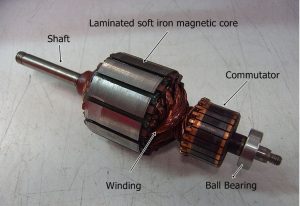 Usually, in a generator, it rotates when a conductor is rotated inside the magnetic flux it induces an emf that further produces a torque. This torque, in turn, rotates the rotating part. 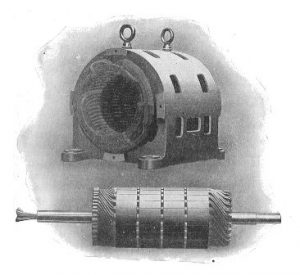 These drawbacks can be overcome by making the changes in the cross-sectional area of the rotating conductor bars. This achieved by skewing the rotating bars of the conductors.

Difference between a Stator and a Rotor

We had studied what is the rotor and its other parts in this discussion. It is described as the rotating part of the machine that is used in any rotating machine for the function of either generating or delivering power. In addition to this, we had also discussed the different types of rotating parts available and its working, advantages, disadvantages, difference between a stator and rotor, and applications. Here is a question for the readers what is the function of the Air type?