You are here: Home / Electrical Circuits / Electrical / What is a Variable Resistor : Working Principle & Its Applications 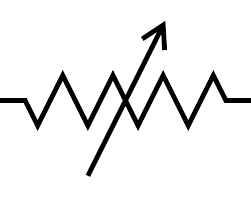 To understand the working principle, it must be noted that we are discussing the case where terminal C is variable. As can be seen from the circuit equivalent, the terminal C position can be varied by moving the sliding contact. It must be remembered that the resistance of an element is a function of length, cross-sectional area, and resistivity of the material. By varying any of these, the resistance of the element varies. Now in this circuit, as the position of the terminal C is varied, the effective length of the wire or conductor varies. Hence in between the terminals B and C, we are obtaining a variable resistance.

As the resistance is varied, the current in the load varies as per Ohms Law. Hence by varying the position of the sliding contact, a change in current or voltage across the load can be obtained. It must be noted that the terminals shown in the figure can be interchangeable. They are not fixed.

Types of the Variable Resistor

The different types of variable resistors include the following.

This is one of the most common variable resistor used. In this type, based on the position, the voltage is varied. Hence the name is given as a potential-meter or potentiometer. Also called a rotary rheostat. It has got three terminals as shown in the figure below.

Out of the three terminals, two are used. One is connected to the resistive element, and the other is connected to the knob. As seen in the above figure, by rotating the knob above, the position of the resistance differs. We know that resistance depends on the area of cross-section, length, and specific resistance. So by varying the position of the knob, the length varies and hence resistance varies. This change in the resistance cause change in voltage, and hence the potential difference. A simple example of this potentiometer is changed in the speed of the ac motor by applying a varied armature voltage. They are also frequently used as power control devices. They can control voltage, current. Light intensity, sound, etc. Also used in heaters, oven, electric motors, and many other electrical appliances.

This is also called a linear rheostat. In this type, the resistance is adjusted by varying the position of the wiper shown on the horizontal bar. The wiper is in connection with the resistance material below. This element has two ends for obtaining variable resistance. As the wiper is moved from one end to another, a variable resistance is obtained. This type is often used in laboratories. The wiper is placed atop an insulated ceramic core. And a long wire is wounded around the core. They are also called as wire wound resistors. Due to the nature of the movement of the wiper, they are also called slide rheostats. 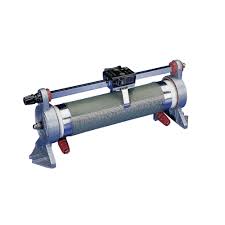 As compared to potentiometers, rheostats carry more current. In other words, the current rating of rheostats is very high. It may range up to 10 A. The high rating is because of the wire. Since the current-carrying capability depends on the cross-sectional area of the conductor, to carry high currents, the thick wire is used to wound around.

In this figure shown above is a digital resistor ladder. As it can be seen that, a number of resistors have been connected in the circuit. By closing the switches, we can obtain a series connection of resistor shown. The number of connections, also called steps decides the output resistance of the circuit. To adjust the number of ladder connections, an onboard chip is placed on the resistor. Also called as a wiper. Digital resistors, also called digital pots have a number of applications. Often used in bridge circuits like Wheatstone bridge, Andersons’s bridge, etc. which are used to calculate inductance and capacitance. The bridge circuits operate on balancing impedance principle for which, the resistance needs to be modified. The other applications are digital to analog converters, brightness control, gain control, etc.

Presets are the mini version of potentiometers. The working principle is the same as potentiometers, i.e. a small knob is available to vary the resistance. But here, we don’t have any horizontal knob projecting outside. 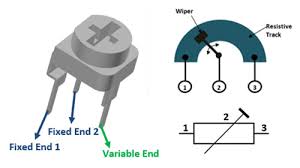 Like other variable resistors, it has also one fixed end and variable end. As shown in the figure above. The variation of the mechanical knob on the top varies the value of resistance. Such resistors are designed to be mounted directly on printed circuit boards (PCB). They are mostly used for applications that how low specifications, like setting the frequency of an alarm tone, checking the resistance of a photovoltaic cell, etc.

To understand the variable resistor connection and working principle lets take the rheostat. The internal configuration of the rheostat is shown below. 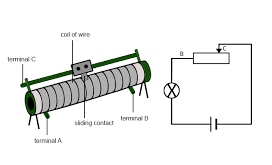 It consists of three terminals, terminal A, B, and C. The circuit equivalent of the device is also shown. It can be seen that the load is placed between the terminals B and C. The terminal B or C can be the varying one. In between the two terminals A and B, a long wire is placed. The area of the wire is determined by the current-carrying capacity or current rating. The wire is wounded on a ceramic core. The sliding contact, or also called as wiper comes in contact with the wire.

The variable resistor has a number of applications. A few of them has been listed below

1). Does a variable resistor change voltage?

Actually a variable resistor does not change voltage. It changes the resistance of the element. But due to changes in resistance, the voltage also changes. It follows the Ohms Law.

2). How do you test a variable resistor?

First, the continuity in the connection of the resistor is checked. Then the working. It can easily be done using a multimeter.

3). What is the symbol of a resistor?

The resistor symbol is shown below.

10 K variable resistor means, its resistance can be varied up to 10 thousand ohms.

5). How many terminals a rheostat has?

A rheostat has three terminal