Aluminum Conductor Steel Reinforced (ACSR) conductors are popular among different conductor configurations for transmission of voltage. These conductors are known for their strength and durability. As compared to other configurations like All Aluminum Conductors (AAC), ACSR conductors are known to have more strength and conductivity. Also, ACSR reduces undesired phenomenon such as skin effects, proximity effect, etc. Used almost extensively in all countries to transmit huge amounts of voltage from one end to another. Due to their stranded nature, they are easy to transport, unlike in solid conductors that break during transportation and handling issues. As per cost, they are more costly as compared to other configurations. They are also available for different voltage levels.

What is the ACSR Conductor?

The name ACSR or Aluminum conductor steel reinforced comes from the configuration of the conductors. It means that the conductors are stranded conductors and the central strand is made up of steel and the outer strands are made up of aluminum. Both layers have their own functionalities. The aluminum strand serves the purpose of transmitting the voltage. That means the aluminum layer acts as a conductor. 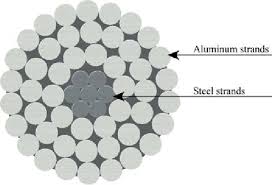 Since aluminum is one of the best conductors and available in abundance, at low cost, aluminum is selected to be the conducting layer. But aluminum has the disadvantage of less strength. A complete conductor of aluminum can’t be laid for long distances since due to sag i.e. lowering due to its own weight it will break. The disadvantage of low strength in aluminum conductors is overcome by steel. Steel increases the strength of the conductors. For this reason, the word reinforced is used. The steel conductors are placed in the center of the ACSR conductors.

The design of ACSR conductors is done as per the voltage level at which it is used. For example, if we are using at 11 kV, the conductor’s design would be 1/7. That means that one steel conductor is surrounded by 7 aluminum conductors. Similarly, we can have other designs such as 12/7, 36/1, 24/7, 26/7, etc. Of course, in all these examples the lower number indicates the number of steel strands and a larger number indicates the number of aluminum strands. Again aluminum and steel strands have their own dimensions. Generally, the diameter of these strands is the same. The overall diameter of the ACSR conductor is calculated by considering both the aluminum and steel strands.

As we have seen that the ACSR conductors are sized as per the number of strands and level of voltage transmission. Regarding other aspects of the sizing, we can also define the aluminum size, diameter, etc. For example, at an operating voltage of 66/132 kV, the current-carrying capacity is 480 Amp at 75-degree centigrade. For this ACSR conductor, we will use 30 numbers of aluminum strands and 7 number of steel strands. The diameter of each aluminum strand is 3 mm and similarly, steel strands have 3 mm of diameter.

The overall diameter of the conductor becomes 2.10 cm and its weight is about 0.394 kg/mt. Similarly, at an operating voltage of 220 kV, the current-carrying capacity is 735 Amp at 75-degree centigrade. For this ACSR conductor, we will use 54 numbers of aluminum strands and 7 number of steel strands. The diameter of each aluminum strand is 3.15 mm and similarly, steel strands have 3.15 mm of diameter. 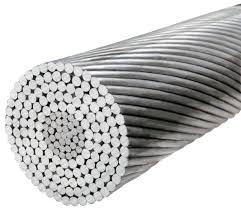 Based on which material the conductors are made of, they are classified as. A brief list of conductor types is mentioned below

There is one brief classification of ACSR conductors. It is named in a funny manner 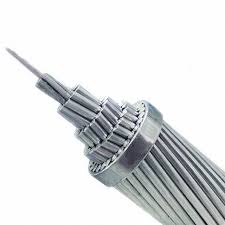 One important point to be noted is that the current carrying capacity depends on the cross-sectional area of the conductor, in other words, the cross-sectional area is calculated from current-carrying capacity. Therefore in the transmission line, there is no huge change in conductor dimensions, since the current is not much varying at the two ends of the transformer. Similarly, the insulation level is decided based upon the voltage levels. This is an important parameter in types of equipment such as underground cables. And this is the prime reason why voltage is stepped up by using the transformer but not current. As power is constant, if we step up voltage, the current comes down, and with that decreases the size of the conductor. And hence there is a decrement in copper losses and increment inefficiency.

The ACSR conductor properties include the following.

One of the important properties of ACSR conductors is the skin effect. The phenomenon of skin effect is due to varying flux linkages. The mutual flux interactions between the inner strands and outer strands are not uniform due to a mismatch in atmospheric conditions. For example for the outermost layer, the upper layer is air, but the bottom layer is conductors.

The upper layer air has high reluctance, bottom layer conductors have low reactance. Which implies that flux linkages will be more for the bottom layer, and hence more reactance. This means that the net reactance of bottom conductors is more and the upper conductor is less. As we know, the current tries to flow in the least resistance path. So when the ACSR conductor is energized, all the currents are confined to the outermost layer. The outermost layer is also called as the skin of the conductor. Hence the name has been given as skin effect. Due to the skin effect, the net resistance of the conductor increases.

The advantages of ACSR conductor include the following.

Hence we have seen the functionalities of ACSR conductors. Due to its number of advantages these conductors are used almost for all transmission line applications. The aluminum forms the conductivity and steel constitutes the strength to the ACSR conductors. It would be interesting to note what are the other choice instead of aluminum or steel in ACSR conductors. That must give the same advantages and properties.