The history of electrical conductance invention takes back to the eighteen and nineteen centuries where Mr. Benjamin Franklin (1706–1790) observed that electrons could travel along the path of the metallic rod; which also resulted in the invention of a lightning rod. Mr. Alessandro Volta (1745-1827) studies on static electricity have led to the discovery of electric potential and the principle behind the development of batteries. Mr. Georg Simon Ohm invented the relationship between potential difference and current, which is later considered as a universally accepted standard to measure the electrical conductivity of various materials. This article discusses an overview of electrical conductivity.

What is Electrical Conductivity?

Definition: Electrical conductivity is considered as a significant factor in selecting and handling the electronic equipment’s and designing an end product. In day-to-day lives, every material or devices, which includes both living and nonliving substances, are having some potential difference and conducts to the external electric supply. The capability and ratio of conduction to electrical current depends on the type of materials, its physical properties, and the presence of an external medium. In this article, an overview of electrical conductivity, its standard measurement units, formula to calculate electrical conductivity, the relationship between conductivity and resistivity, and electrical conductivity examples is discussed with respect to real-time applications.

The first and foremost question that arises in any of the reader minds is, what is electrical conductivity? Well, in simpler terms, electrical conductivity is defined as a terminology that is used to calculate the maximum electrical withstand capability of any molecular substances. It also describes the total amount of charge or electron movements inside a substance. It is also called specific conductivity, which measures the material capability to measure electricity.

Most of the SI (International System) units are derived based on their inventor names and also to honor the invention and their research works. In technical terms, the SI unit of electrical conductance is defined as siemens per meter (S/m), and denoted by the symbol “σ.”

Relationship Between Conductivity and Resistivity

By properties and its operation in real-time, conductivity and resistivity are inversely proportional to each other. The resistivity of a material is the force applied by material to stop the flow of electrons. The SI unit of resistivity is “Ω” (ohms). It is also called Omega in the Greek language.

The equation for electrical resistivity is given by, 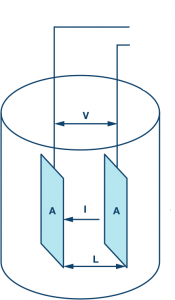 As shown above, Fig let’s assume a single conductivity cell of length “L,” resistance “r’, and cross-sectional area “A.” Let us divide the overall procedure into two cases, namely, single-conductor and double conductor.

Where V = Voltage, I = Current

Length of the Conductor is doubled

Let us consider the two conductors in a series combination. Now, the union of two conductors has changed the initial conductor length “L” to “2L” and by keeping the cross-sectional area the same as “A.” The aftereffects of doubling the length have also increased the resistance R to 2R.

It is perceived from the above statements that resistance of a conductor is proportional to its length and higherw.r.t external factors. There is a requirement of increased applied voltage (double) I=(2V)*(2R) to allow the same current to flow through the conductor.

In a scenario where two conductors are connected in parallel combination, the total area will be doubled as that of the original area of a single conductor. The length of the objects remains the same, but the resistance is halved(1/2R), and each half of the input current will flow through individual branches. It should also be noted that most of the current will flow through less resistance path, which in-turn states that higher the electrical conductivity, lesser will be the resistance.

The relationship between resistance and resistivity is given by,

As per the above statements, electrical conductance (σ ) is a reciprocal of resistivity

The electrical conductance is equal to,

The inference from the above statements shows that the overall electrical conductivity is dependent on four major factors namely,

During the selection of material, it is important to consider the electrical conductivity in several contexts.

In the above table, copper material is considered as a standard copier value. These values are retrieved as per the International Annealed Copper Standard (IACS) and the percentage of relative conductivity related to copper material. Moreover, the resistivity or standard pure copper measured at the initial stage is 1.7241 microhm-cm at 20°C (68°F).

Even though copper has better conductivity, there are chances where reinforcement of other materials such as brass with a foreign substance that has superior tensile strength can be considered as the best-fit choice than copper. However, at present, copper is considered as a suitable material with high conductivity.

Electrical Conductivity Meter is an instrument or a handy device designed to calculate the rate of conductivity of the exterior test material. The utilization of these meters is generally witnessed in water monitoring systems to measure the number of nutrients, impurities, or salt in freshwater and aquafers in hydroponics.

A simple laboratory conductivity meter encompasses four electrodes and leverages potentiometric technique to measure the rate of conductivity. The electrodes are manufactured using platinum material, cylindrical structured, and placed concentrically. The outer pair of electrodes is subjected to externally applied AC current and potential difference across the inner material is calculated using ohm law along with other parameter considerations such as distance amongst electrodes and surface area. Further, electrolytes of known conductivity are used to obtain precise and accurate values.

1. What does it mean to be electrically conductive?

In general terms, any material that easily allows electrons or charge to flow inside the object is called as the electrically conductive material.

The factors that affect electrical conductivity are as follows,

3. What is the SI unit of resistivity?

In technical terms, the SI unit of electrical resistivity is given by ohm.meter (Ω.m)

4. What is an electrical conductivity test?

Electrical Conductivity Test is carried out to measure the maximum electrical withstand capability of the system.

5. How do impurities affect electrical conductivity?

The introduction of impurities can either increase or decrease the resistance of the conductor. For example, infusion of 5 percent gold to cast iron will reduce the resistance to some extent. In another scenario, the infusion of pure copper with aluminum increases the resistance. It entirely depends on the user source material and infusion substances that act as impurities.