You are here: Home / Basics / What is Specific Resistance : Formula and Its Affecting Factors

Specific resistance is the measure of the conductivity of a particular element and it is also known as electrical resistivity. Based on the value, the conductivity, and hence the electrical characteristics of the element are evaluated. This parameter is often used to analyze the electrical conductivity of a particular element, and hence have prime importance while selecting the elements. Some applications need elements that have superior electrical characteristics. The selection of those materials is done based on resistance. Thermal stress, strain, etc, are other aspects of the selection of materials.

What is Specific Resistance?

Definition: It is defined as resistance offered per unit length and unit cross-sectional area when the applied potential difference is known. The mathematical expression for specific resistance is given as ρ= RA/L 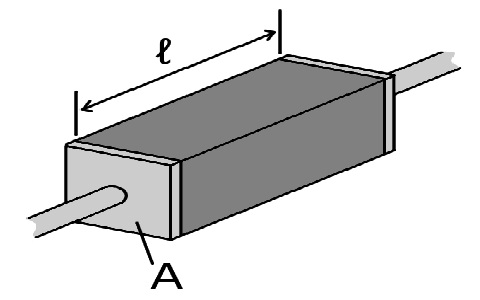 The formula for this is given by

Where ‘ρ’ is is also called electrical resistivity. R is the resistance of the material, A is the cross-sectional area and L is the length of the conductor.

The specific resistance for materials at 20 degrees centigrade are listed below.

It can be seen that silver has the least resistance at a particular temperature. For this reason, silver is considered one of the best conductors. The examples of other good conductors are Gold, Aluminum, etc.

The factors affecting the specific resistance are explained in brief

What is Airway Resistance?

It depends on the cross-sectional area, length, and temperature. For a specific temperature, the resistance of copper is 10.37-ohm meter. This has been calculated at a temperature of 200 C. From this, it can be evaluated that, copper is one of the good conductors after silver.

For this reason, copper is used in most of the electrical wiring due to its low specific resistance and abundance at a low rate. On the other hand, silver which is a better conductor than copper, cannot be used because of high cost and less abundance.

1). What is the unit of Resistance?

The unit of resistance is ohms. Given by the symbolic representation Ω

Ohm’s Law states that the flow of charges or current flowing through an element is directly proportional to the potential difference applied across it.

The resistance becomes the proportionality constant between voltage and current. More is the resistance, more would be the voltage drop and less would be current. However, Ohm’s law is valid only at a constant temperature. For varying temperatures, ohm’s law is not valid.

3). How is voltage defined?

Voltage is the potential difference across two points. It is equivalent to pressure applied. This causes the charges to flow from one point to another, or other words, the charges flow from high pressure to low pressure. Hence the voltage causes the current to flow from one end to another. Resistance is the parameter that defines the proportionality constant between voltage and current.

4). Does Specific Resistance depend on temperature?

Yes, it depends on the temperature.

5). Does specific resistance depend on length?

Yes, it is inversely proportional to the length of the conductor. With an increase in length, it decreases.