You are here: Home / Electrical Machines / What is Torque Converter : Components and Its Advantages

Several years ago, Twin Disc Clutch Company stepped in with the idea of hydraulic torque converters and its capabilities to change the operational methodologies of logging and dirt-moving machinery and other industrial drives. In 1938, the company got succeeded with its first torque converter and its application as a drilling rig. In the later stages, it has changed the lives of much high-machinery equipment. The torque converter plays a significant role in transmitting the torque of the engine during the process of multiplication (converter) and coupling (lock-up). In lower gear ratios, the torque multiplication mode allows the vehicle to accelerate, and then by speeding up the vehicle, in higher gear ratios, the engine and the transmission are mechanically linked via the lock-up clutch appropriately called lock-up mode). The torque converter response characteristics also affect the vehicle’s longitudinal dynamics and, consequently, the fuel consumption and driving efficiency during a gear shift.

What is Torque Converter?

A torque converter can be generally defined as a fluid, which is integrated or coupled to convert the prime mover rotary power to the rotating mechanical driven load. Either an electric motor or an internal combustion engine is used as a prime mover. In real-time, these conversion processes can be observed in a vehicle mechanical clutch with dynamic transmission where the load is separated from the external power source. The mass of the flywheel can be replaced with this converter, and interfaced with crankshaft through flex plate; a flexible material responsible for the multiplication of torque with respect to the load. Additionally, it can be placed or adjusted in any locations as per the user requirements, located between the placement and engines flex plate.

The major advantage of a torque converter is its capability to replicate the generated torque power to the number of times proportional to the difference amongst the output and input rotational field. 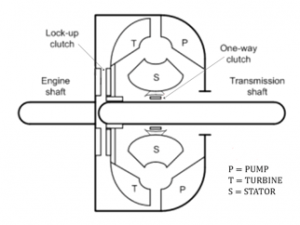 The stator is the key element of the converter. It can also be named as the house of torque multiplication; removal of this part results in the non-functionality; in simple words, the torque converter is nothing but a fluid coupling. In construction, the stator is modeled using two parts that comprise an inner hub and outer wheel. The internal hub plays the role of a stator support shaft that is integrated into a shaft and perceives the front pump of the transmission.

The impeller is integrated and positioned at the rear half or housing of the torque converter shell. It is used to the power transmission fluid and enables smooth vehicle movements. Moreover, attaching the pump with converter housing and the resultant speed generated is proportional to the speed of the engine.

This section is divided into three stages to provide a comprehensive overview of the working principles. Individual stages are as follows,

The stall stage is the initial phase of the torque converter wherein the load is provided with a sufficient amount of power to start and synchronize the speed between the pump and turbine. At the beginning stage of the conversion process, a prime mover is used to supply power to the impeller, but the rotary force of the turbine cannot be achieved. It can be visualized through a scenario where the vehicle driver applies the gear, but it does not move due to the extreme pressure implied on the brake. Sufficient power is generated with input power multiplication logic to develop a torque that is above the threshold point of the applied brake power. The time-span of this stage is very less throughout the cycle.

In this stage, the ratio of torque multiplication is lesser than stall conditions. Once the load is started, there should be a constant acceleration between the impeller and turbine. The relatively large difference in torque inhibits the performance and acceleration of these two types of equipment. To overcome these limitations, a multifaction factor proportional to the difference between turbine speed and the pump is designed along with other design facets and introduced to obtain efficient acceleration.

This stage is initiated in conditions where turbine speed exceeds ninety percent of the impeller speed. Multiplication of torque is stopped, and torque converter behaves like a normal simple fluid coupling. This is a stage in which a lock-up clutch is applied, and resultant can tend to enhance turbine fuel efficiency.

In automotive real-time applications, almost all the devices employ hydraulic torque converter for transmitting and amplifying the torque generated by the engine. The speed-sensitive governing devices control shifting operations, and dynamically change the valve position to govern the flow of hydraulic fluid. The gear change and shift are achieved by neutralizing the torque with hydraulically engaged bands and multiple-disk clutches. The entire transmission control units are interlinked amongst each other and placed inside an emission control system; which is used to regulate the ratio of air to fuel ratio and engine timings.

1. What does a torque converter clutch do?

Torque converter clutch acts as a connecting medium between the transmission input and engine output. It empowers the user to minimize the temperature of the transmission fluid and increase the fuel mileage of units.

2. What are the signs of a bad torque converter?

The major drawback is transmission slipping. Either increase or decrease in transmission fluid results in gear slipping, thus reducing the overall efficiency of the system. Other negative signs include damaged clutches and seals, shuddering effects, overheating, and fuel contamination.

3. Can you test a torque converter?

Yes, and the easy process to diagnose torque converter is through the stall test. In this process, the torque converter has to be firmly placed at a single position, and extreme pressure is to be applied on braking to gain control over the machine and apply high pressure to the throttle pedal for two to three seconds. Measure the stall speed at that instance and compare it with the manufacturer datasheet.

4. Can a torque converter cause vibration?

Yes, it is the generic scenario perceived during torque converter break-down or damaged cases. This stage is also known as “lockup shudder.” In modern equipment, Lockup torque converters were added to minimize these circumstances.

5. Does a torque converter add horsepower?

This converter doesn’t add horsepower but can recover the lost speed easily during braking or flashing conditions. This converter is found to be highly efficient in heavy-duty equipment with higher stall speed.

Thus, this is all about an overview of the torque converter. This is a kind of liquid coupling that uses a prime mover to transfer rotating power to a rotating driven load similar to an internal combustion engine. Here is a question for you, what are the types of torque converter?