You are here: Home / Basics / DC to DC Converter Operating Principle and Functionality 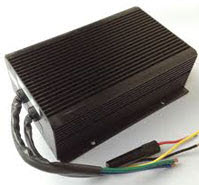 The low input DC voltage is converted into high output DC voltage using DC to DC boost converter. As the input voltage is stepped up compared to output voltage, hence, it is also called as a step up converter. Generally, DC to DC converters can be designed using power semiconductor switching devices and discrete electrical and electronics components.

In DC to DC converter, the converter operates in two modes: 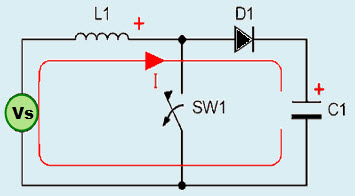 The continuous conduction mode circuit of the DC to DC boost converter is shown in the figure that consists of an inductor, capacitor, switching device, diode, and input voltage source. This boost converter circuit switch is controlled using a pulse width modulator (PWM). If this switch is in ON state, then energy will be developed in the inductor and thus more energy will be delivered to the output. 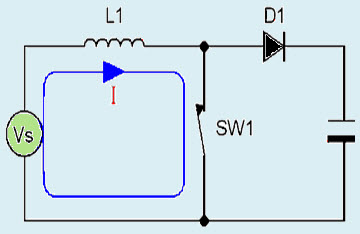 DC 12V to 24V converter can be considered as a practical example of DC to DC converter (boost converter) which is used as DC power supply.

In several instances, we require 24V DC from a 12V source. This circuit suits well enough for converting DC 12v to 24v. This circuit is capable to produce a steady 24C DC output and to deliver output current up to 800mA. The circuit is basically a DC to DC converter designed using LM324 IC which is configured as an oscillator. This LM324 is used for producing the switching frequency and a transistor is used as the semiconductor switching element.

IC LM324 is a major component of this DC to DC converter circuit. LM324 is a quad operational amplifier and out of these four operational amplifiers inside the IC, only two are used in this circuit. An oscillator is formed by the IC1a, R1, R2, R3 and C1, this oscillator operates around 500Hz. By using resistor R2 and capacitor C1 we can set the oscillator frequency. A comparator is formed by IC1b, which is used to compare the output voltage with a reference voltage and such that to control the output voltage this feedback voltage is given to the oscillator stage. 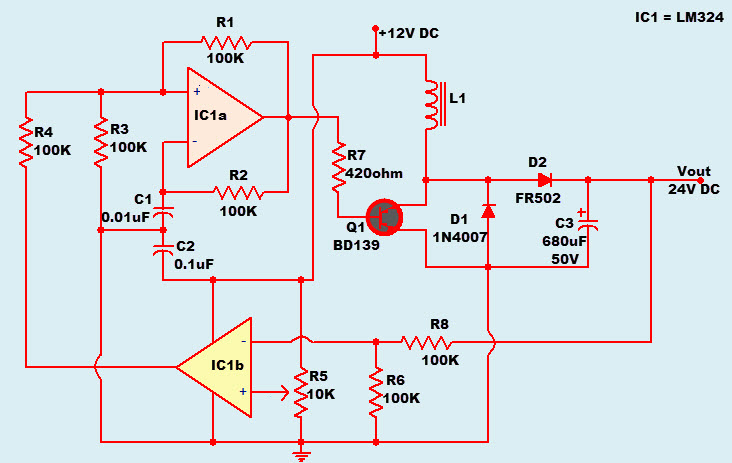 A preset R5 is connected to the non inverting pin of IC1 to form a potential divider circuit. The inverting input pin is connected to the output through a 100K resistor. The output of this IC1b comparator is given to the non inverting input pin of IC1a through another 100K resistor. The output of the oscillator IC1a is given to the base terminal of transistor Q1 through a resistor R7 to limit the transistor Q1 base current.

If the output of the oscillator IC1a is high, then the transistor Q1 switches ON and the current passing through the inductor L1 increases. If the output of oscillator IC1a is low, then the transistor Q1 switches OFF and thus the inductor current passes through D2, C3, and load if any in the circuit. The fly back diode D2 gets forward biased and thus during the ON state the energy is stored in the inductor. This stored energy will be dumped into the capacitor. Diode D1 acts as a freewheeling diode.

For more information about power converters and power electronics projects, feel free to contact us by posting your comments in the comments section below.