Early 1830 Faraday worked on the process that is related to electromagnetic fields. He discovered a theory that is basic behind the working of a generator. Later several discoveries have been done that led to the invention of some other generators, those are the shunt, series, and compound type. However, all these types work on the same principle I,e the Faraday’s law of electromagnetic induction. So, the invention of the magnetic laws by Faraday behind the working of the generator has put an important mark on today’s life.  In this article, we shall discuss what is a DC shunt generator, its working principle, emf equation, load test, characteristics, and applications.

What is a DC Shunt Generator?

It is a type of self-excited generator that has its field winding arranged in parallel with the armature winding. This type gives the constant voltage output and used for the charging of batteries. Since the field winding is connected in parallel with the armature it receives less current across it as it is wound with more turns and thin wire. Due to this, it is capable of producing fewer losses and it cannot be loaded eventually.

It also works on the principle of electromagnetic induction just like a normal motor. The field winding is connected shunt to the armature. When an input is given by the prime mover, the conductor is rotated in the permanent magnetic field. Due to this, the current gets induced in the conductors placed under the influence of the magnetic field.  According to Faraday’s law of electromagnetic, an emf will be induced in the conductors when a conductor is rotated in the magnetic field. This induced emf is used to generate energy that is used by other mechanical devices. The current induced flow through the armature winding which is alternating. The output from the armature winding is always alternating and because of the commutator, the alternating current is converted to the direct current. This is how a direct current output is obtained in a shunt generator. The working diagram of the shunt generator is shown in the figure below.

The circuit diagram corresponding to the shunt generator is shown in the figure below. 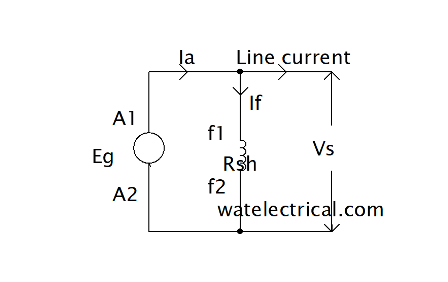 The emf equation corresponding to the shunt type generator is given by E = ФZNP/60A. From the circuit diagram, we can get Ia = IL + If

A = number of parallel paths,

If = field current. Line current can be further explored as Ish = V/Rsh 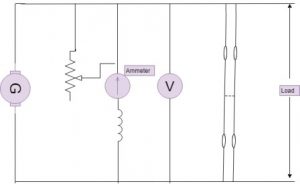 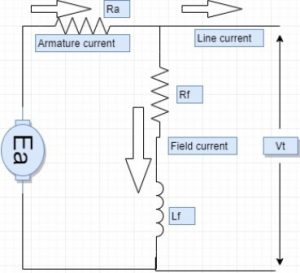 From the diagram, we get

The field winding of the machine depends on the terminal voltage. As the load increases, the load current increases due to less resistance. We know that Ia = IL + If

we can observe as VT decreases the field current If  also decreases. Due to this, the flux value decreases all these values put together and drawn as a graph plotted between the terminal voltage and the load current as shown in the figure below. 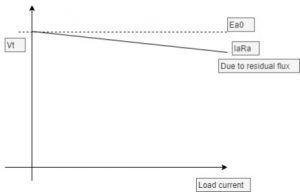 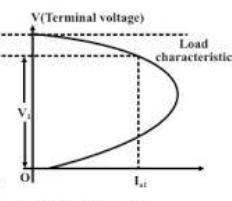 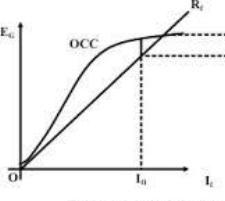 Thus, in this article, we had discussed what is a dc shunt generator. It is a type of self-excited generator whose field winding is connected in parallel with the armature winding and is used as a constant voltage generator that supplies energy for constant mechanical loads. In addition to this, we had also discussed its working principle, emf equation, load test, characteristics, and applications.