The first generator was invented early in 1832 by Hippolyt Pixii which was called a Dynamo. It was the first machine that is capable of generating power. Earlier to the invention of the electric generator, the machine introduced was able to work on the basis of the electrostatic principle. This was based on the working of electrically charged plates which is used to drive belts, plates, and disks. As moving forward, the thought of inventing the free energy generator has also come up. This energy is made by the usage of strong permanent magnetic fields that is able to produce some force to generate energy. In this article, we shall discuss what is a free energy generator, how it is made, how it works, its advantages, and its applications.

What is a Free Energy Generator?

It is a type of generator where we can generate energy without using any input. Nothing in the globe is free of cost I,e one needs to pay a certain amount for using some units of energy. But a question arises does really free energy can be made. Yes, we can generate by using the property of magnets. There are basically, two kinds of magnets that are in usage. One is the electromagnet and the other is a permanent magnet. The electromagnet is the one that gets energized or delivers its magnetic property when the current supply is given. A permanent magnet is the one that has some inbuilt magnetic properties which are used in DC motors mainly i.e PMDC Motor. In addition to these two magnets, there is one more magnet I,e Neodymium magnets. These magnets are much powerful than permanent magnets. These have strong magnetic power than the ferrite magnets. The free energy generator uses this strong magnetic field to rotate the shaft of a motor. 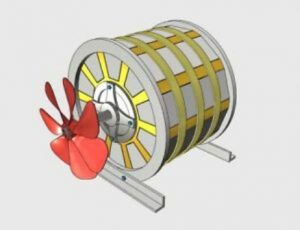 A normal generator requires a motion to be given by a prime mover to the conductors placed in the magnetic field. When this motion is given, an Emf gets induced in the armature conductors and further, it is used as electrical energy. The same electrical energy output is obtained by using a free energy generator but without using any input. The Neodymium magnets have a strong permanent magnetic field, which produces a strong force that is able to pull the shaft. This force is produced by the repulsion force of the Neodymium magnets. The working of the neodymium magnetic motor is shown in the figure below. 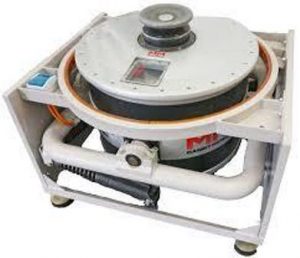 How a Free Energy Generator is Made?

Flywheel generally uses the energy that is imparted when some external source. After the usage of required energy by the mechanism, the flywheel stores the excess energy that is left over. The flywheel stores this leftover energy and uses it when necessary. In the case of steam engines when energy is supplied to the engine, it uses the required energy and the energy that is excess even after the utilization is stored by a flywheel. Another form of storing energy by flywheel is mainly due to the inertia. Any rotating machine has inertia even after the shutdown of supply the motor runs due to inertia. This rotation even the power shutdown is utilized by using a flywheel that can be further utilized during the next cycle. The working figure of the flywheel is shown in the figure below. 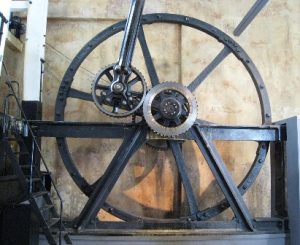 It finds its application in many places like toys, cars, and engines, etc.

It finds its applications in many places as listed below:

Thus, in this article, we had discussed what is a free energy generator? It is a type of generator that produces energy by the usage of the strong magnetic field developed by Neodymium magnets. Apart from this, we had also discussed how it is made, its construction, working, advantages, and applications. Here is a question for the readers what is the principle behind the working of a free energy generator?