You are here: Home / Basics / How to Make a DC Motor – How a Generator is Made from it

The electric motors first developed were of electrostatic in nature. This type of motor is first invented by Scott scientist Andrew Gordon and Benjamin Franklin in the early 1740s. Later many investigations have been done to improve the performance of the electric motor. In 1821 Faraday invented the rotator motion by the induction principle. Later this rotator motion is considered to be the principle of electric motors. In this article, we shall discuss the basics of a DC motor like its working, how a simple DC is made, and also how a DC generator is made out of DC motor?

It is a type of motor used for the conversion of electrical energy to mechanical energy. The input supply given to this type of motor is the DC supply. When this input Dc supply is given it converts the electrical energy to mechanical energy. Due to electromagnetic induction operation, the current-supplying windings encounters a force. Due to this force, a unidirectional torque is developed that initiates the rotor to rotate. The working of the basic DcCmotor is shown in the figure below. 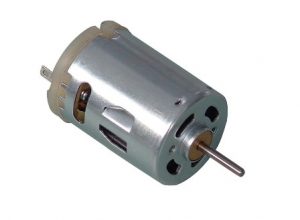 How to Make a DC Motor

A motor is a type of rotating machine that can be made by a simple construction. For example, let us do this by using permanent magnets. As we know that when a current-carrying conductor is placed under a magnetic field it is exhibited by a force.

Let us do this by putting a core that is wound by a copper winding. This winding is positioned under a permanent magnetic field that is shown in the figure.

The Dc supply given to the armature winding I,e is the copper winding wound on a core is able to allow current through it. As the current is flowing through the copper conductors and these conductors are under influence of a permanent magnetic field and force will be experienced on these conductors. This force is enough to develop a twisting force I, e the torque inside the machine. Due to the magnetic force, a twisting force is enabled that makes the armature to rotate. The practical application of this simple motor is shown in the figure below.

How a DC Generator is Made from a DC Motor

When the handle of the armature (copper conductors) is rotated under the influence of a magnetic field an Emf is induced. This induced emf induces a current in the copper conductors. Fleming’s Right-hand rule is used to find the direction. The current generated is received as output at the output terminals of the armature winding. This output is fed to any load such as a portable fan. This energy is sufficient to run the fan. This machine acts as a dynamo as and when the handle is rotated, electrical energy is generated. Thus, how a dc generator is made out of a motor. The working of a generator that is made out of a motor working diagram is shown in the figure below.