The first motor I,e permanent magnet was first invented by Hungarian scientist Istvan. He invented the first PMDC that works on the usage of permanent magnetic field interaction. But these motors faced several constraints to work practically. In 1882, John Urquhart suggested using electromagnets instead of permanent magnets. Early twentieth-century, the permanent magnets secured much importance because of the invention of these magnets made of high-quality magnetic material. In the 1930s, permanent magnets made of iron and cobalt can retain their strength for a longer time. Therefore, these materials also secured prominence importance and also faced fewer difficulties in practical use too.  So let us discuss in detail about this motor working which we are experiencing on a daily basis. In this section, let us know what is a PMDC motor, its Definition, construction, working diagram, speed control, advantages, disadvantages, and purposes.

What is a PMDC Motor?

Definition: It is a type of motor similar to that of a normal motor but the difference is it has no field coil. It generates torque by the interaction of armature flux and permanent flux. The armature of this type of motor is shown in the figure below. 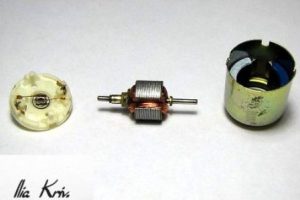 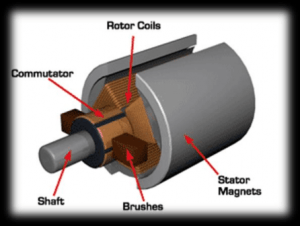 The working of this type is similar to that of a normal DC motor. It runs approaching the origin of Electromagnetic Induction. Here the magnetic induction occurs between the armature field flux and permanent magnet field flux. Due to the interaction of these fluxes, a torque is developed. Let us discuss in detail how this torque is developed.

The voltage equation of this type of motor is given by

At steady-state condition, the current is considered as zero, then dI/dt = 0. The final equation that we get is V = Kt w + IR.

The curve drawn between torque and speed is explained as below. 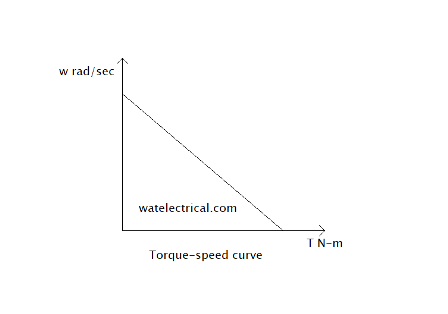 We know that in DC motor

In permanent magnet type, as the field is constant we can omit flux. The armature has some resistance which can be varied. Hence, by varying resistance and voltage speed of this motor can be controlled.

The difference between the winding diagram of a normal and this motor is explained.

So, we had discussed what is a PMDC motor. It is a small motor that finds its application in daily used appliances which uses its armature flux to interact with the permanent magnets and develops torque. And we had also discussed its definition, construction, working, speed control, characteristics, advantages, disadvantages, and employment. Here is a question for the readers, Explain the characteristics of a DC motor?