You are here: Home / Power Plant / What is Open Cycle Gas Turbine : Working & Its Uses

Gas turbines were developed with the advancement in the two domains of technology like internal combustion engine and steam turbine, The operations that took place in both these fields, lead to the development of current day gas turbines and this happened in the year of 1940s. During the period, 1500 – 1870s John Barber, Vinci and Branca, and other people define or develop other models that utilize steam or hot gas to develop motion. At the same time, Samuel Morel, Barnett, Samuel Brown, and Said created the design of the internal combustion engine. The fundamental understanding and hypothesis of how the gases are used and their performance in the enclosed spaces are known. So, this article gives a complete understanding of one of the types of gas turbine which is Open Cycle Gas Turbine, its working principle, advantages, and applications.

What is an Open Cycle Gas Turbine?

An open cycle gas turbine is defined as the combustion turbine plant which is fired up by the liquid type of fuel in order to trigger a generator rotor that generates electricity. There will be the exhaustion of residual heat to the atmosphere nearly at 5500C. The location of generators and turbines are in the enclosures which are manufactured for reduction of noise and occupy a space of nearly 75m * 75m per unit. The exhausted stack height is nearly at a height of 30m where the intake structure height is at 20m.

Before moving ahead to know the working principle of open cycle gas turbine, let us know the design system of the device which is that residual heat gets exhausted to a level of 5500C. Here, the generators and turbines are placed in the enclosures and those are structured for noise reduction and they need a space of nearly 75m* 25m for each unit. The height of the stack is nearly 30m whereas the intake structure height is almost 20m. The open cycle gas turbine diagram is shown below: 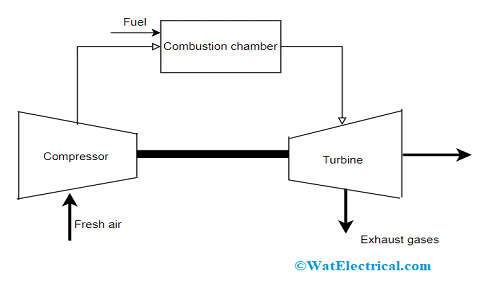 The open cycle gas turbine has three parts compressor, power turbine, and combustor where the compressor performs sucking of air from the atmosphere and then compresses it by passing through many compressor phases. Fuel is injected into the combustion compartment and it gets mixed up with compressed air. This mixture then undergoes the operation of ignition so that it generates velocity gas. This velocity gas is then allowed to pass through turbine blades which turn the shaft that is connected to the generator’s rotor section. This rotor revolves internally to the stator and generates electricity. The generated electricity is then distributed to flow across the voltage network and to other locations where it is required.

This is the open cycle gas turbine working principle.

The characteristics of open cycle gas turbine are stated as follows:

The main advantages of open cycle gas turbine are explained as below:

These are the foremost advantages of the OCGT device.

The disadvantages of open cycle gas turbine are as follows:

The main applications of OCGT are:

Overall this is a detailed explanation of open cycle gas turbine, working principle, advantages, drawbacks, and applications. This is the prominent type of gas turbine employed to turn around the turbine by making gas as the functional fluid. In general, this is also utilized to describe the whole internal-combustion engine which consists of three sections which are a compressor, a turbine, and a combustion chamber. The other topic to be discussed and to known about this topic is what are the types of open cycle gas turbines and how they perform?