An LED is considered as the semiconductor light resource which produces light when there is current flow through the device. The color of the emitted light is known by the amount of energy needed for the electrons to traverse through the semiconductor’s bandgap. Initial LEDs were employed as indicator lamps in the place of incandescent bulbs. Whereas the modern advancements in LED have emitted high-level output appropriate for lighting in external locations. The development of LEDs led to modern sensors and displays where their increased switching rates are helpful in modern-day communication systems. Now, this article focuses on RGB LED, how does it work, schematic diagram, and types.

What is an RGB LED?

RGB LED is fundamentally considered an LED package that holds the ability to emit almost any of the colors. The implementation of this device can be found in many applications like external lighting such as stage, outdoor location, home décor, matrix display, and many others. RGB LEDs consist of three principle-colored LEDs which are Red, Green & Blue. These three colors are combined to emit almost any of the desired colors.

To generate various colors, it is required to set up the intensity level of every internal LED and then combine to get the desired colors. The intensity of every LED can be adjusted by using the PWM procedure and it has noted that even though LED generates individual colors our eyes might see a combination of colors because every color is close to each other and that appears as a mix of colors.

As it was already stated that RGB LED consists of three individual LEDs and these LEDs share anode or cathode in common particularly in a through-hole kind of package.

The LED consists of four leads where three of the leads are used for their own and the fourth one is used as either a common cathode or anode. Every lead in the LED is identified by its length. The structure is shown below: 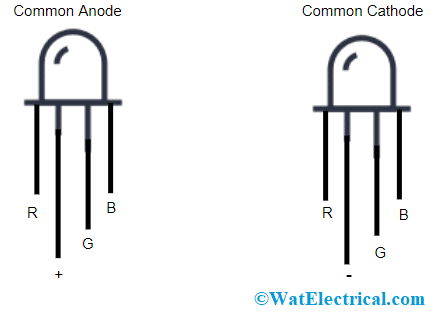 Assume that the lead is facing towards you and in this direction, the lengthy lead which is second from the left position is either anode or cathode and then the sequence follows as red, anode/cathode, green and blue.

This is how the RGB LED structure looks like. When one is not able to distinguish between anode and cathode by its length, then it can be possible through a multimeter. The procedure for this is explained below:

In regard to this discussion, there are mainly two RGD LED types which are

Let us discuss each of these in detail in the below sections.

The connection of common anode LED type is shown below: 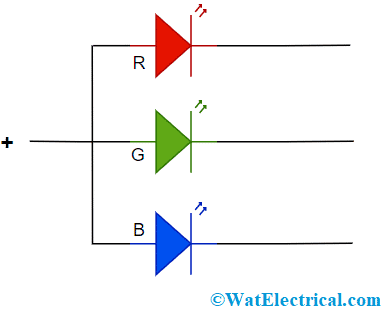 The connection of common cathode LED type is shown below: 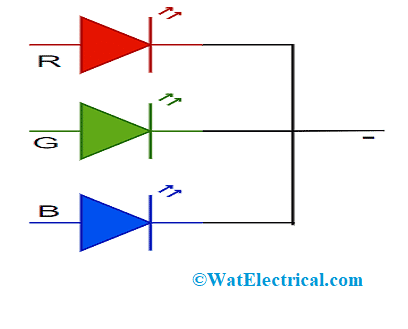 Setting the Color of an RGB LED using an Arduino Uno

To set up the color of an RGB LED, the essential components those are required are:

To obtain the required color from RGB LED, it is needed to set the intensity level of every internal LED. To achieve this, either PWM (pulse width modulation) or CCR (constant current reduction) techniques can be employed. Here, the PWM technique is used because Arduino Uno is used for setting up the color.

The arrangement and design can be done easily. The RGB LED with common cathode, potentiometers, resistors, and Arduino Uno board are connected together through jumper wires. The connection is done in the way that three potentiometers are connected A0, A1, and A2 ADC channels of the Arduino unit. This ADC unit measures the level of analog voltage that is across the wiper edge of the trimmer. And depending on the voltage, the Arduino sets up the duty cycle of the signals in PWM that are produced at the pins D9, D10, and D11.

Here, is the pin configuration of the Arduino Uno board.

The Arduino Uno is included with 6 pins for analog input, a 16MHz resonator, power jack, reset button, ICSP header pin, USB pin, and 14 pins for digital i/p and o/p. The supply voltage for the IC is 12V. The pin description is explained below:

The schematic diagram can be drawn in two ways for the common anode and common cathode. The difference between these two wirings lies in the second lead. In the case of the common anode, the 2nd pin is connected to the 5V pin of the board whereas, for the common cathode, the 2nd pin is connected to the GND pin. To have a clear understanding, a software sketch is useful. So, by running the sketch/code, the color of the RGB LED can be known.

The common anode schematic diagram is 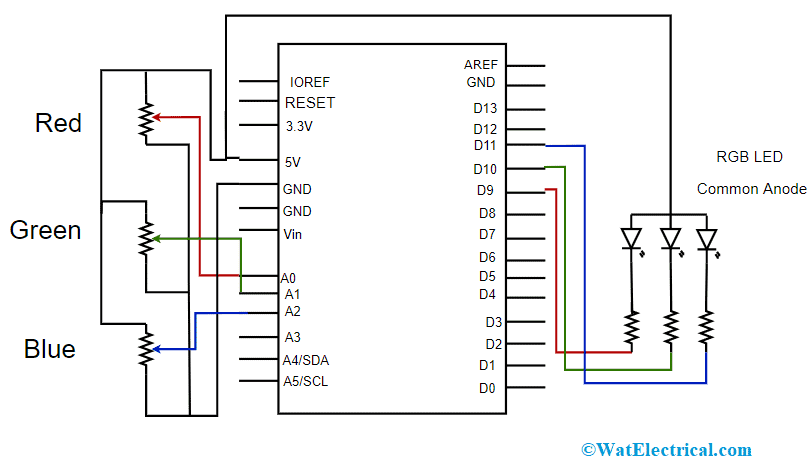 The schematic diagram for the common cathode is 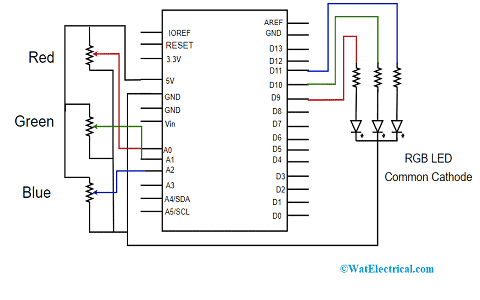 The benefits and drawbacks of RGB LED are:

So, RGB LED is simple to understand and design. This article has clearly explained how RGB LED works, its schematic diagram, set up using Arduino Uno, and its Types. Know how to write Arduino Uno and upload it into the board using Arduino IDE.