You are here: Home / Electrical Circuits / Electrical / What is a Resistor : Construction, Properties and Its Applications

The resistor is one of the fundamental elements in engineering. As compared to other fundamental elements inductor and capacitor, the resistor is used in almost all electronic and electrical circuits. It is also known as a linear, bilateral, and passive element. The resistor is available in a different range of values, starting from milliohms to megaohms. It also dissipates a lot of heat when it carries current. Resistor value depends on the resistivity of the element, length, and cross-sectional area of the conductor. It is also available as fixed and variable resistance.

What is a Resistor? 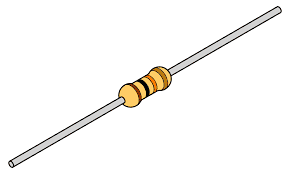 The resistor has the following properties

Construction of a Resistor

A resistor consists of two terminals. And in between the terminals, we have elements that act as a resistor. As shown above, the yellow part forms the material through which the resistor is made. Based on the value of the material, its resistance is evaluated. For very high resistors we use long wire which forms the resistance. Just like in variable resistor where a long wire is wound on a ceramic core.

The Resistor in series and Parallel

To obtain different values of resistance, the number of resistors are connected in series or parallel.

As shown in the above figure, two resistors R1 and R2 are connected in series. In such a case, the equivalent resistance is given by

The voltage across R1 is not the same as the voltage across R2. The more the resistance value, the more would be the voltage drop across the resistor. An increase in resistance by adding external resistance is one method to control voltage. For example in speed control of DC motor, armature voltage is varied by adding external resistance. Change in voltage varies the speed. The same principle holds true for a rheostat also. In a three-point starter, four-point starter, etc. also the same concept is used. Resistances are added in series in steps, such that resistance increases in steps and hence starting current is reduced.

The circuit below shows the parallel connection of resistors. In parallel, the equivalent resistance is given by 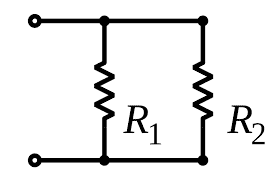 In other words, two resistors are said to be in parallel, if the voltage across them is the same. The voltage across R1 and R2 is the same, but the current gets divided among R1 and R2. In a parallel connection, the overall resistance decreases. As resistance decreases, current increases. So, this connection is used, where we need to increase the current, and maintain voltage constant. The current gets divided based on the current division rule.

Sometimes a combination of series-parallel resistances is also used. The best example is the star-delta starter. Where initially the connection is instar and later converted to the delta.

The value of resistance can be calculated by generally two methods. One is to calculate the resistance based on specific resistance, length of material, and cross-sectional area of the conductor. It can be expressed as

The other method of calculating resistance is by using the color code method. As shown in the figure below, each resistor is assigned with a set of colors on its body.

Applications of the Resistor

The resistor is one of the fundamental elements in the field of electrical and electronics engineering. It is almost used in every circuit which deals with current and voltage. Some of the frequently used applications are

1). What is the function of the resistor?

The function of the resistor is to oppose the flow of charges, i.e. current.

2). What is an example of a resistor?

Anything that opposes the current, can be treated as a resistor. Like copper wire which has bad resistance, but good conductance. Rubber has bad conductance, good resistance.

3). What are the types of resistors?

Two resistors are said to be connected in series if the same current passes through them.

LDR means a light-dependent resistor. Its resistance value can be varied based on the intensity of light.

We have seen the concept of a resistor, its working principle, and methods of connecting the resistor. It is one of the fundamental elements and used almost in all electrical and electronic circuits. At this point, one may think what is the role of the resistor in other fields of science like chemical engineering, biology, etc. Does resistance have a role to play in that aspect that needs to be analyzed?