The word capacitance is derived from capacity, capacity is to contain, or store. a capacitor refers to a device that is capable of storing electrical energy. Unlike the storage of water which can be stored in ponds, lakes, tanks and our seas which are our almost unlimited reservoir of water we have very limited options for direct storage of electrical energy. As a matter of fact, we have only one option as a battery to store electrical energy in the form of chemical energy and is not a direct method. This phenomenon of energy storage and then release finds lots of use in electrical and electronic circuits. Capacitors are available in a very wide range and sizes, but functionally all are used for storage of electrical charge. Here instead of going into details of a specific capacitor, we shall limit ourselves to the general principal/construction of capacitors.

What is a Capacitor?

The capacitor is a device that is capable of storing electric charge +ve and -ve both. Due to this charge, a potential difference gets created between the terminals. And a capacitor behaves like a battery. Their size varies from a small bead type used in electronic circuitry and large ones used for power factor improvement in power circuitry. 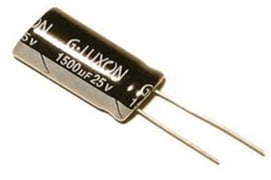 Construction of a Capacitor 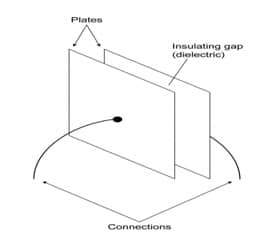 The simplest form of capacitor diagram can be seen in the above image which is self-explanatory. The shown capacitor has air as a dielectric medium but practically specific insulating material with the ability to maintain the charge on the plates is used. It may be ceramic, paper, polymer, oil, etc.

Also, have a look at the adjacent image to see how a small cylindrical capacitor will look like. It may, however, be added that very small and large capacitors may come in different shapes and sizes. Most of the capacitors are multilayer capacitors so that even in a small size we can accumulate a greater amount of charge. The unipolar capacitors can only be used in dc while bipolar can be used in dc and ac. The capacitor is properly sealed externally so that no ingress takes place. The body of each capacitor is marked for its capacity, voltage, and polarity. It is built to withstand mechanical shocks.

The Basic Circuit of Capacitors

The image below is showing a simple circuit to show how capacitor charging and discharging takes place in a circuit. As the changeover switch moves towards the battery positive terminal the positive charges start accumulating on the positive plate of the capacitor with equivalent negative charge accumulating on the negative plate and this goes on till the capacitor voltage matches the battery voltage. Now as we move the changeover in such a way that it gets connected to the negative plate the battery gets open-circuited and the resistance gets connected across the capacitor. Since a charged capacitor behaves like a voltage source it gets discharged through the resistance.

Each country and standard have their own way of denoting capacitors, however, the most common are given hereunder.

Working Principle of a Capacitor

As we know that when a voltage source is connected to conductor it gets charged say by a value Q. And since the charge is proportional to the voltage applied, we can say that:

In order to equate the charge Q and voltage V.

Q=CV, where C is the capacitance of the conductor.

C=Q/V, the value of C is dependent on various factors as given hereunder.

All these factors are of utmost importance while designing a capacitor. The mathematical expression for the same is:

The energy stored in a capacitor is given by the formula: Q=CV and W=CV²/2. This is also known as Capacitor Formula.

The capacitor in Series and Parallel

The standard unit of capacitance is Farad, named after scientist Michael Faraday.

Capacitors are used in almost every field of electronics, and play a very significant role in power circuits as well. Depending on the application we may use different types of capacitors for different applications.

Thus, this is all about an overview of the capacitor, used in multiple electronic applications. To think of an electronic gadget without capacitor is next to impossible. In power applications, their role as power factor improver is significant. However, as a power storage device, they have yet to play a great role due to their power to volume ratio being low. In the future, we may see many strides being made in this direction. An increase in the use of electric vehicles will also augment research in this direction.