You are here: Home / Electrical Circuits / Electrical / What is a Dielectric Material : Types, Properties and Its Advantages

What is Dielectric Material?

Definition: Dielectric is the materials that do not allow electricity to flow within them but show electric effects. They can be also defined as a substance that does not allow the flow of charges through it permits them to exert electric field and force. The dielectric material supports the electric field but opposes the flow of charges. It is regarded as an insulating medium. In the process of supporting the electrostatic field, it dissipates energy in the form of heat.
Formation of Electric Field-Polarization. 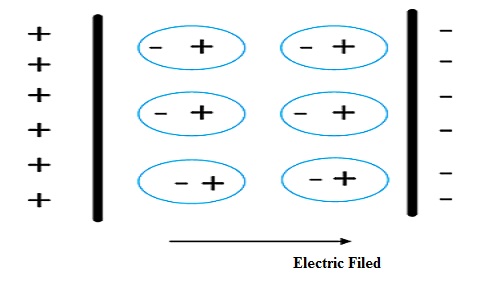 As shown in the above figure, the two thick lines represent two conducting medium, just like plates of a capacitor. The circles inside represent the molecules of the dielectric. When the plates are applied potential difference, as shown by positive and negative symbols, the charges inside dielectric align themselves accordingly. The opposite charges of the molecules dielectric cancel themselves and remaining charges which align towards the conducting plates, form an electric field as indicated by the arrow in the figure. That’s why it is said that dielectric material opposes the conduction of charges but forms the electrostatic field. It also forms the electric force due to the field. This is defined as polarization.

There are two types of material

The center of mass for positive charges is formed by hydrogen atoms. Similarly, the center of mass for negative charges is formed by oxygen atoms. There is a separation between these two centers of charges, which causes dipole movement. There will be a dipole movement from the two centers of charges, even in the absence of an electric field. Similarly, HCl and NaCl are examples of polar dielectric materials.

The properties of dielectric materials are listed below:

Due to its properties, dielectric materials have a number of applications. A few of them have been enlisted below-

1). Which material is used as a dielectric?

2). What is the use of dielectric?

3). Why dielectric material is used in a capacitor?

Ans. Yes, water is dielectric. It is made up of polar molecules, hence it can be categorized as the polar dielectric.

5). What is a perfect dielectric?

Ans. An ideal dielectric is a material which exhibits infinite insulation, or zero conductivity, and has only displacement current. A perfect dielectric is equivalent to a capacitor that can store energy.