You are here: Home / Basics / What is a Screw Pump : Working Principle, Types and Benefits

When compared to centrifugal pumps, positive displacement pumps are the most effective ones and screw pumps come under this classification. It came to know that conventional kinds of screw pumps were in availability in the ancient period itself. Then after the screw pump was pioneered by Archimedes. The pumps that were invented initially consists of a cylinder, a revolving unit, and a spiral tube. With the advancements in technology, the operating methodologies of this also got changed and now they are serving wide applications in many industries. So, this article explains the concepts of what is a screw pump, its operating principle and the advantages of this apparatus.

What is a Screw Pump?

Definition: It is considered as the subcategory of a positive displacement pump that operates either with one or more screws to function pump activity in its spindle direction. This pumping machine functions effectively for the liquids which have minimal turbulence, less vibration, self-primed and which hold the ability to function with less air pocket having less functioning noise. The invention of a screw pump has directed to numerous multiple axis machinery where screws revolve in the opposite axis or they continue to be in a static position internal to the cavity.

The cavity might be profiled so that the development of cavities in the pumping equipment will get stuck. Fluid moves into the pump from the suction side and has a linear movement alongside intermeshing screws and from there moves towards the pump discharge side. As the space that exists between the liner and the screws is very minimal, the pressure levels of the liquid are increased at the time of movement.

Screw pumps have various application ranges such as

The pressure in this is generated through the addition of axial acceleration to the liquid mode internal to the clearance section. The working principle of the screw pump varies completely to that gear pump, here the driver screws and the driver revolves in line by the utilization of timing gear. Both the screws that are functioning through a fine clearance pull in air trapping internal to the fine clearance of interlocking screw strings.

The application of force to the air in the direction of output creates differential pressure that assists to draw in the fluid to pump medium. And now the revolution of shaft pushes liquid towards the outer side because of axial acceleration of the screw movement. The liquid might be trapped either into multiple or one screws based on the pump construction.

The crucial functionality is that the absorbed water moves towards the outer section and then towards the center internal to the pump casing. Through this mechanism, water in all directions moves towards empty space thus invalidating the impacts of directional thrust offering hydraulic stability to the whole pump construction. This working principle shows the effect on pump functionality, output deviations, efficiency and bearing life.

As because of the inclination to produce an extended level of vacuum pressure, this pump does not need any kind of priming and so they are self-primed. In general, screw pumps are operated in the range of 800-2600 rotations per minute. When the shaft’s revolution speed increases, the output flow range will get decreased.

These pumps can be of many types based on the number of screws, constructional change, and percentage share. Irrespective of all these factors, a general screw pump design is constructed with the below parts:

It is the revolving part of the screw pump that assists in pumping the liquid at the constant volumetric level at any location of the revolution. The crucial functionality of this part is to propel the driven screw through timing gear.

To make sure of hydraulic stability, both driven and driver screws have opposing directions and this position allows the fluid to move axially to generate the non-pulsating results.

These ports provide starting liquid medium to the screw pump thus avoiding the pump from being dried.

There are mainly two kinds of bearings:

This portion connects the pump assembly with that of driving motor and this can be achieved by adaptable couplings. 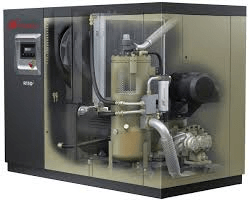 Based on various factors, these pumps are essentially classified as five types and they are of:

To define there are many screw pump advantages and disadvantages.

1). Who invented the screw pump?

A screw pump was invented by Archimedes and initially used for irrigation and out ship purposes.

2). How does a screw compressor work?

When the driven and driver gears function in opposite directions, the compressor pulls air in between the space of these gears.

The pump operates in the condition that is transferred to the corresponding volume of fluid based on the pitch and speed of the screws.

4). What is a positive displacement pump?

So, this is the concept of what is a screw pump and all other theories of it. There are many other concepts to be known in a screw pump like how they pump fluids, what is a power zone screw pump. Depending on the industry requirement, there are various kinds of screw pumps available in the market. So, choosing the best one yields the best results. Here arises the question is, what happens when screw pumps are maintained properly?