You are here: Home / Basics / What is an Inverter : Working Principle, Classification & Applications

An inverter is one of the most frequently used electronic circuits in most of the applications. It’s a circuit that converts fixed DC supply to alternating AC supply to feed AC loads. Widely used in commercial, aviation, residential and industrial applications. It could be regarded as the backbone for most of the applications. It is frequently used as an interfacing unit between DC supply and load. In many cases, it acts as an interfacing unit between AC supply and load also. For example, in the speed control of induction motor, the supply is AC, but AC supply is converted to DC by a rectifier circuit and again DC is converted to AC by inverter and fed to the induction motor. It helps to improve power quality by overcoming the harmonic content.

What is an Inverter?

As the name implies, half-bridge inverter, the output varies from +Vs/2 to -Vs/2. As shown in the circuit, two switching devices are connected in one common branch or also called a leg. This switching may be SCR, MOSFET, or IGBT. Generally, we use MOSFET more commonly for high-frequency applications. One more advantage with MOSFET is it has low switching losses but high conduction losses. 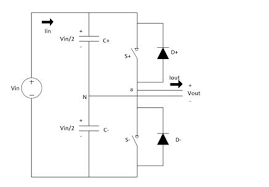 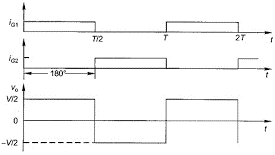 As shown in the output figure, when S1 is conducting from 0 to T/2 the output +Vs/2 is obtained. Similarly, when S2 is conducting from T/2 to T, the output -Vs/2 is obtained. Hence the output alternates between +Vs/2 to -Vs/2, which is regarded as alternating voltage. T is the total time period of the conduction of two devices. It can be noted that the output voltage waveform is a stepped square waveform. In inverters, we never obtain a sinusoidal waveform. The stepped square waveform alternates between two values, which is considered as alternating voltage. The same is for three-phase inverter also.

As shown in the circuit diagram, it is a three-phase inverter, also called a full-bridge inverter. In all for the circuit, we require six switching devices. From a DC supply, we obtain a three-phase alternating voltage on the load side. 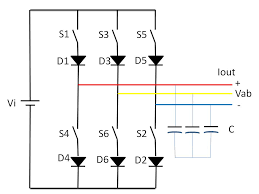 Firstly, the devices need to be numbered for the correct operation. Note that, we have six devices, two devices on one leg. This circuit is also called as three leg operation. There is a logic behind the numbering of the devices. The devices are numbered as per the sequence of triggering. This means that as shown in the circuit, the switch S2 is triggered after S1, and similarly for the rest of the devices. The output required is three-phase voltage, which means that three-phase sequences, separated by 120 degrees each are required. For each phase sequence, one pair of switching devices are operated. This means that to obtain the R phase, S1-S2 is turned on. To obtain Y phase S3-S4 are turned on and to obtain B phase S5-S6 are turned on. The output waveform is shown below. 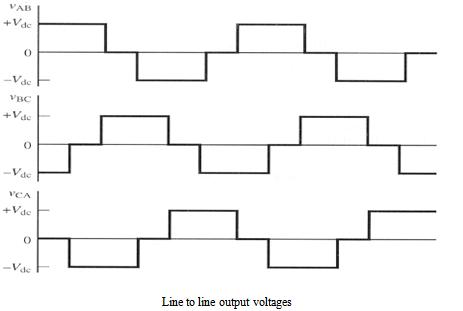 The applications of inverters include the industry, residential, etc. It is one of the most frequently used devices. A few applications have been described in brief

How to Make an Inverter?

1). What is the difference between UPS and inverter?

UPS or uninterruptable power supply is basically used to store energy by using batteries. But inverters are used to convert DC supply to AC for control or supplying AC loads. A combination of UPS and inverters forms the commercial UPS sold in the market.

Keeping in view of magnitude, DC is more dangerous than AC. AC alternates its magnitude, but DC is a fixed value.

With a 3000 W inverter many applications at home such as two fans, three tube lights, TV, computer system, etc. can be easily run for 3-4 hours. However heavy loads such as Air conditioner, fridge, etc needs to be avoided.

4). How many amperes does an inverter draw?

Ans. The calculation is simple. Power is given as the product of voltage and current. So a 300 W, 15V inverter can draw up to 20 A. However keeping the losses in mind, the values are less.

5). What is dual inverter technology?