In the early 1870s, the electric motors used in traction did not give profitable results. But the invention of the series motor had brought much convenience in this field. Due to its performance that it can produce high starting torque. This advantage of producing high starting torque has also used the railways where the locomotives can be easily moved forward. In time, a process has also been discovered to use the technology regenerating power by the use of a series motor. In this article, we shall discuss what is a DC series motor, its definition, construction, working, circuit diagram, characteristic relationships between speed-torque and speed-current, speed control, and applications.

What is DC Series Motor?

Definition: A DC series motor is a machine that is used at a place where high torque operating conditions are required. It is a machine whose winding is associated in series with the armature winding of the motor. Due to this series arrangement, the motor is able to produce more starting torque compared to other motors.

The circuit diagram corresponding to the DC series motor, the field, and armature winding are connected in series is depicted. 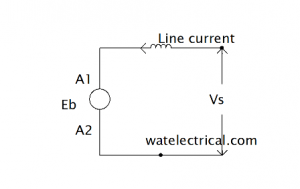 The equivalent circuit corresponding to this motor is shown in the figure below.

From the figure, we can observe that IL = If = ISe I,e as the field winding is in series the line current and series winding current remains the same.

The difference between this motor and the others is that the construction of this motor is slightly different from others. The motor winding arrangement is different as discussed earlier.

This motor also works on the principle of electromagnetic Induction just like other motors. The working is almost similar to a normal DC motor I,e when a current-carrying conductor is positioned under a magnetic field it experiences a force. This force is able to produce a torque which in turn rotates the rotor of the machine.

Why Series Motor is Started with No-Load

The torque and armature current characteristics

The torque and armature current characteristics are explained by the equation

The figure that depicts the Torque-armature current graph is shown below. 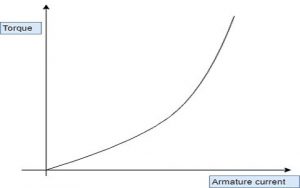 The speed armature current relationship graph is shown in the figure below. 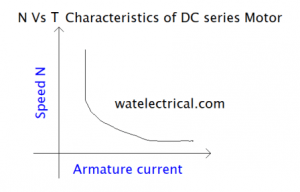 Torque and armature current relationship is given by T ∝ (Ia)2

The graph that shows the performance characteristics is shown in the figure below. 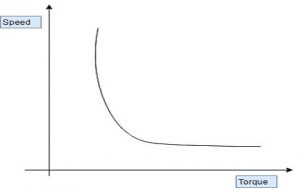 The circuit diagram that refers to the armature resistance control is shown in the figure below. 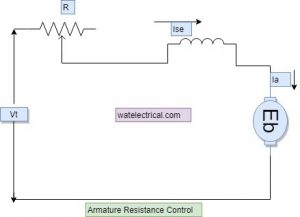 The circuit diagram that explains the field control method is shown in the figure below. 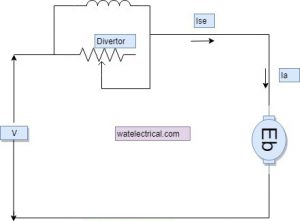 The circuit diagram that explains the Tapped field control method is shown in the figure below. 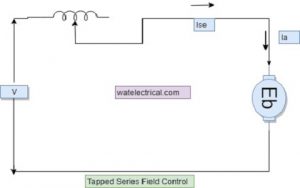 Thus, in this article, we had discussed what is a DC series motor. It is a motor whose field winding is combined in sequence amidst the armature winding and it produces high starting torque. We considered its construction, working, circuit diagram, characteristic relationships between speed-torque and speed-current, speed control, and applications. Here is a question for the readers, how load test is done on the DC series motor?