Modern machinery has an important role in the usage of an electric motor. Because every machine requires the operation of a motor. Most of the equipment in today’s life has the usage of a motor.  An Electric motor is a machine that converts electrical energy into mechanical energy. The electric motors are classified into two types like AC motor as well as the DC motor. It uses a battery to operate, it carries the unidirectional current from the battery and operates to convert the EE to ME. This article gives brief information about the motor, its construction, working principle, different types, speed control & applications.

What is DC Motor?

A motor that is used for converting the energy from mechanical to electrical. It operates by using the DC supply.

The assembled parts of this motor include Frame or Yoke, armature core, commutator, brush, bearings, fan, armature winding, and shaft.

The Frame is used to give mechanical support to all the parts to be housed. It is also used as a protection device for the inner parts against environmental hazards. The motor parts which are assembled are illustrated in the following figure. 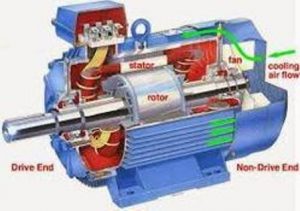 The brushes are made up of either graphite/carbon depending on the size of the motor. The brushes are used to get the flow of current from the commutator. 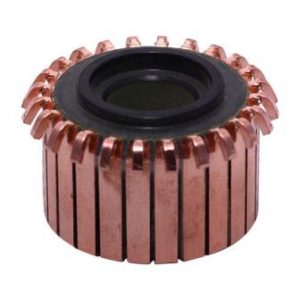 Bearings are used for the smoother operation of the rotor. A fan is used for cooling the inner peripherals of the motor. It removes the excess heat that is generated in the motor. A shaft is used to deliver the output as mechanical energy. The whole armature is assembled on the shaft.

The DC motor working principle is the Lorentz force equation. It states that whenever a conductor that carries current is placed in a magnetic field, it experiences a force. It also works on faraday’s law of electromagnetic induction principle. Because an electromagnetic force is induced in the coil when this coil is rotated in the magnetic field.

A DC supply is given to the armature winding such that the winding carries current. Due to the current in the winding, the coil is exerted by some force. This force is based on the Lorentz force equation, as the current-carrying coil is under the influence of the magnetic field.

The machine typical working is shown in the below diagram.

The coil in the figure is marked on one side as AB and the other side as the CD. The current within the  AB side is inside whereas the current within the CD side is outside. As this coil is under the magnetic lines of forces, it experiences some force. This force direction is found by using Fleming’s Left-hand rule. 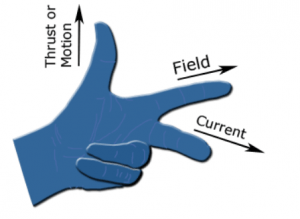 By applying fleming left hand-rule in the coil side AB we can observe that the force is acting upwards and in the side CD it is acting downwards. So, it creates a motion for the coil to rotate in the clockwise direction. Now, as the coil rotates, the coil changes its side I,e the side AB is under N pole influence and the side CD is under the S pole influence. Now the current in coil side AB is outwards and in coil side CD it is outwards. But, the force acts in the clockwise direction. This is achieved by using the commutator segments. Without commutator segments there would unidirectional current in the coil of the motor net force acting would be zero and no torque would be developed.

The below diagram is Force acting as the coil is perpendicular to the magnetic field. At this position, the force in the coil side AB will act downwards. 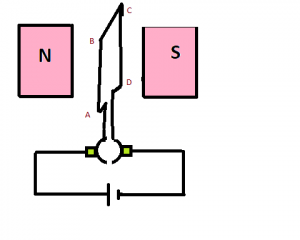 As the coil is rotated the coil side also changes their positions which are shown in the figure below. At this position, the force exerted on the coil side AB is upwards. 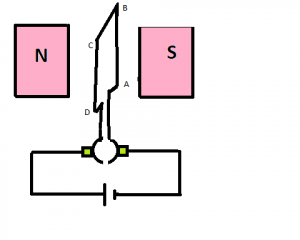 So, we can understand that when the coil is parallel to the field the net force will be opposite to that of the position of the coil when it is perpendicular. To avoid this, multiple coils are used such that a unidirectional torque is developed which allows the rotor to rotate continuously.

These machines are classified based on the excitation and the placement of winding. They are Separately excited and self-excited motors.

Based on the winding placement classified as follows

The motors classification is shown in the following block diagram. 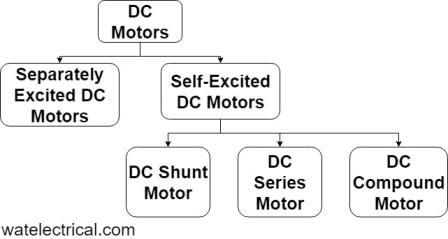 Types of the machine

The self-excited motor requires only one DC source which is used for both the stator as well as the rotor winding. These are the motors that are most commonly used for their advantage.

In the DC series motor, the field winding can be connected in series with the armature winding. The resistance of the field winding is kept low such that high current flows through the winding. For this purpose, the stator winding is wound thicker with less number of turns. It produces high starting torque and decreases gradually.

In the DC shunt motor, the field winding can be connected in parallel with the armature winding. For this purpose, the stator winding is wound thinner with more number of turns. It produces low starting torque and maintains constant speed characteristics.

The figure shows the DC shunt, series & compound motor are illustrated in the following image.

Speed control of these DC motors is achieved by the following methods.

By varying the armature resistance, flux, and terminal voltage.

The speed of these motors is denoted as

The detailed information of the speed control of DC motors is explained in the next article.

Therefore, in the above article, we have discussed an overview of a motor, which changes the form of energy like i/p mechanical energy to electrical energy with an input DC supply. And also discussed its construction, working principle, different types, speed control, its applications, advantages & disadvantages. Here is a question for you, what are the pros and cons of DC motors?