You are here: Home / Basics / Differences between DC Series and Shunt Motors

Before knowing about the differences between DC Series and Shunt Motors, let us start to know what a DC motor is. An electric motor that is powered up by direct current is termed as DC motor. In a detailed view, when a current-carrying conductor is positioned in the area of a certain magnetic field, it gains some torque and tends to have a moment. So, this is the same principle where a DC motor also works on. A DC motor is also named depending on the type of field connection that is with the armature. So, based on this concept, DC motors are classified.

An Outline of DC Series and Shunt Motors

Mostly, DC motors are categorized as:

In this type of DC motor, field windings are in series connection with that of armature windings. The series winding will be with a comparatively greater number of turns of the copper strip which holds the capability of even high load currents when the motor comes across. In the beginning, both the windings are with minimal resistance values, and thereafter a high amount of current will be drawn thus generating high-level torque.

The speed of this machine is mainly based on load, so when the maximum load current flows through the circuit has decreased, then the speed will be enhanced. In a few cases, the speed of the motor possibly augments to the level more than that of the specified limit. As because of this, DC series motor should not have a connection with the load through the belt.

In this type of DC motor, field windings are in parallel connection with that of armature windings. The rotational speed of the motor will be up to the rated value and any modification in the load value will not impose any effect on this. The beginning value of the torque will be minimal than that of the same size as a series motor.

The general equations of these motors are discussed below.

For this, the equations of power, current, and voltages are derived as below: 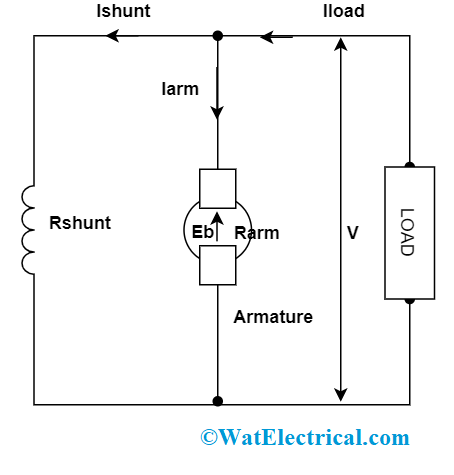 From the diagram, when we apply KCL (Kirchhoff’s current law) at the ‘A’ junction, then

‘I’ corresponds to line current

‘Iarm’ corresponds to armature current and

When we apply KVL (Kirchhoff’s voltage law) at the field winding, then

And the equation across armature winding is derived as:

Finally, the power equation is the addition of generated mechanical power, armature losses, and the field losses and is given by:

And ‘VIarm’ corresponds to the amount of electrical power at the motor’s armature winding.

From the diagram when we apply KCL 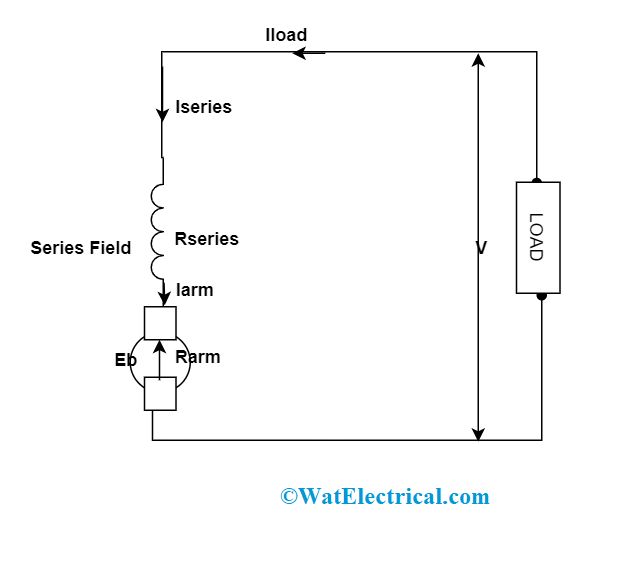 When we apply KVL (Kirchhoff’s voltage law), then

And the power equation is given by

Finally, the power equation is the addition of generated mechanical power, armature losses, and the field losses and the final equation is:

The comparison of these motors are discussed below.

1). Can DC motor be operated with AC?

A DC series motor can operate when it is provided with a single-phase alternating current.

3). What is the foremost difference between DC series and shunt motors?

The main difference between these two motors is how the field and armature windings are connected.

4). What will be the condition when DC shunt motor is initially started with load?

When the DC shunt motor is started without load then the minimal field current will be less, so that this creates damage for the motor.

So, this article shows a basic overview and the differences that exist between DC shunt and series motors. Also, know more about the concepts like how the working of the series motor and shunt motor varies and their related concepts?