You are here: Home / Electrical Circuits / What is a Flyback Transformer : Circuit Diagram and Its Working

The 20th century has seen many advancements in technology by inventing many new devices. This was also the era where researchers were making a shift from analog technology to digital technology.  The size of many devices began to shrink from meters to millimeters and nano. One such development can be seen in the way monitor screens have been evolved. Displays have come a long way from being a bulky monochrome to slim UHD. One of the devices that played a crucial role in the design of monitor screens is the “Flyback Transformer”. Apart from many other applications, this device is well known for its usage in CRT.

What is a Flyback Transformer?

Why is it Called a Flyback Transformer?

Flyback Transformer got its name from one of its operations. The primary winding present in this transformer uses a low voltage sawtooth wave. This wave first gets straightened and then switches off abruptly, causing the electron beam to fly back from right to left on the display. Hence the name Flyback Transformer. 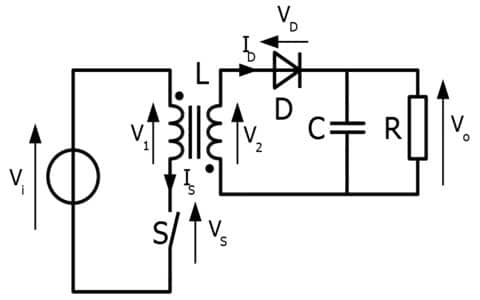 The unique construction of a flyback transformer with an air gap that can store energy makes it stand out from all other transformers.

When the FET switch is closed, the current is supplied to the primary winding. At this stage, energy gets stored in the gap provided in the magnetic core of the transformer. The output rectifier is reverse biased, thus no current flows into the secondary winding when the switch is closed.

When the switching is done after all the energy is transferred from secondary to load, the secondary current reaches zero. Hence, the Flyback transformer is said to be working in Discontinuous Conduction Mode (DCM).

Flyback transformers can be designed to work either in CCM or DCM or both. This transformer can operate in any of the above modes depending on the input voltage and load conditions.

Bad design and poor quality of the materials used during the manufacturing of Flyback Transformer leads to damage of the transformer due to short circuit with 2 years of their usage. Some of the common problems found in Flyback transformer are

To test the problems related to the primary winding, a Flyback tester is used. This device identifies the faults in the primary winding by performing the ring test. To test the problems related to the internal capacitor, a normal analog meter, and a digital capacitance meter is used. A good capacitor must range between 1.5 nanofarad to 3 nano farad. Problems such as External arcing to the ground and internal arcing in the winding can be found by listening to the arcing sound generated by the transformer.

For cathode ray tubes, high voltage is required to ionize the electron beam. This can be achieved easily with a smaller size, high voltage flyback transformer compared to the conventional transformers. These transformers work at higher frequencies. When used in televisions, they are used to generate a frequency of about 15kHz. When used in modern computer displays, it operates for frequencies ranging from 30KHz to 150kHz.

These transformers are often chosen for high voltage experiments due to their easy availability, simple operation, and high achievable voltages. What is the amount of voltage required by a large color TV CRT?