You are here: Home / Electrical Machines / What is a Transformer : Construction, Working & Its Applications

Well, the most interesting concept to be known in the domain of electrical is the transformation of electrical energy from one form to another. But, Why to transform. We all know that we use AC currents in many of the applications such as in workplaces, small industries and houses as AC voltages can be simply generated and transformed into increased voltages. Even AC voltages can be easily distributed across the nation through cables for extended distances. Moving in this scenario, transformers are the innovative development in this industrial era. A transformer is not an invention by one person, but many life-changing, and innovative discoveries, acclaim for the enhancement of a transformer. So, let’s move into the clear concept of what a transformer is and what are its basic scenarios?

What is a Transformer?

So, basically a transformer is defined as a static device that holds the ability to transform one circuit electrical energy to others through the means of electromagnetic induction. It can be either implemented to maximize (stepping up) or minimize (stepping down) the levels of voltage between the circuits. One might be in the thought of how there can happen the transform of energy. So, it is through the principle of mutual induction where the flux which is stimulated in the initial winding gets associated with the secondary winding. Only increasing or decreasing the power and voltage levels, transfer of energy takes place while allowing frequency term to be constant.

So as to construct a transformer, the equipment that is necessary is two coils that have mutual inductance and laminated steel type of core. The two coils are shielded from each end and also from the steel core. This whole device will require an appropriate container for the purpose of constructed core, windings and a corresponding medium where both the windings and core from the container can be shielded with. So to shield and to let out the winding endpoints from the tank, some kind of apt bushings which are made of porcelain or some capacitor kind need to be utilized. 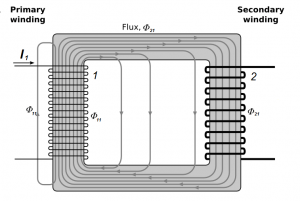 In all the commercial kinds of transformers, the core part is developed of transformer sheet steel kind of shielding’s where all these are assembled to generate permanent magnetic flow having a bare minimum of air-gap incorporated. The steel material that is used should be with maximum permeability and minimum hysteresis losses. So, for this kind of materialization, the steel needs to be prepared with maximum silicon content and it also has to be heat managed. The thorough lamination of the core allows minimum eddy currents to take place. So, to go with effective lamination a slight coat of core plate polish or place an oxide coating on its surface. When the lamination varies in the range of 0.30m to 0.50mm, the frequency varies in the range of 25 Hz to 50 Hz.

It has to be clearly remembered that in the case of transformers, there will be no electricity generation; but only energy transformation through magnetic coupling. The transformer’s core part is utilized to generate a regulated flow for the magnetic flux by the power which is flooding through the windings where these are also termed as coils. The working principle of a transformer can be explained in four sections. These parts are general for any kind and any size of a transformer and those are of below:

The transformer’s input side is generally termed as the primary side as the reason that the major part of electrical power that has to be transferred is connected at this end.

The transformer’s input side is generally termed as the secondary side and here the transferred electrical power is loaded. Based on the load requirement, the inbound electric energy is either maximized or minimized.

A transformer is generally constructed with two windings where those are already discussed. One winding draws out the energy and the other either delivers or loads the energy to the load. These coils are segmented as multiple coils so as to lessen the generation of flux.

The core is generally utilized to create a controlled flow for magnetic flux in the transformer. The core is not simply constructed through a solid steel bar, but through many shielded steel sheets, this kind of construction allows for minimum heating. Transformer cores are basically of two kinds: Shell and Core type. The differentiation between these two is the positioning of windings around the core. In the core type, the shielded core is completely surrounded by the windings. And in the shell type, the laminated core is completely surrounded by the windings.

AC current initiates to flow in the primary winding when the input voltage is applied. The current movement in the winding allows developing altering magnetic field in the transformer core part. When the magnetic movement is around the secondary winding, there develops the alternating voltage. So, the proportion of an actual number of turns in every coil is important in knowing the kind of transformer and also the corresponding output is developed. Based on the proportion of turns in the windings, the ratio of output ad input voltages can be determined. The transformer output voltage is more than that of input voltage when the secondary winding is with more coil turns than that of the primary winding. The output voltage is maximized and so it is considered as a “step-up transformer”. 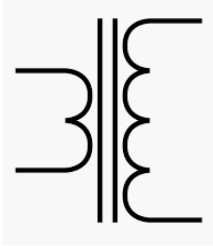 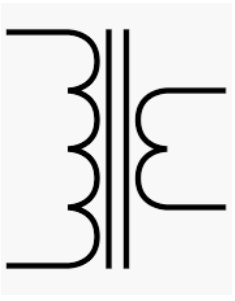 Equivalent Circuit Diagram of a Transformer

The equivalent circuit of the transformer is the circuit where the leakage reactance and the resistance are anticipated to connect at the external winding. The below figure represents the circuit diagram of a transformer:

R1 and R2 are the primary and secondary winding resistances

I0 is No current load

Iµ and Iw are magnetizing and working components. These two are parallelly connected over the circuit.

Through the connection of the circuit, one can be able to know the values of transfer current and voltage and impedance values.

With the variation in the flux internal to the transformer, these losses have happened, and these are again classified as eddy current and hysteresis losses.

And here ‘kŋ’ is the proportionality constant that is based on the core quality and volume of the material,

Bmax is the maximum flux density

These losses can be reduced by when the transformer core is constructed using silicon steel material.

When the flux is closely connected with the circuit, an emf is developed inside the circuit and there happens the current movement, the current that is generated is based on the extent of emf which is across the circuit and also on the circuit resistance. As because the core is constructed on conducting material, EMFs are generated internal to the circuit body and these circulating currents are termed as Eddy Currents. When there is a varying magnetic field, eddy current loses can happen.

These losses are represented as

These losses can be lessened by constructing the core with thin shielding.

As because of the ohmic resistance of the transformer, these losses can happen. When the I1, I2, R1, and R2 are the primary and secondary winding currents and resistances, then the copper losses in these windings are I12R1 and I22R2.

As these losses are varied based on the load, these are also called variable losses.

As because of the presence of leakage fields, these losses can happen. When compared with copper losses, these are minimum and so they might be easily eliminated.

Similar to the other device, the transformer also has its efficiency and it is stated as the proportion of output and input power. So,

These are extremely effective electrical appliances. Many of the transformers will deliver a complete load efficiency almost in the range of 95 to 98.5%. When a transformer is completely efficient, both the output ad input values are almost the same and so it seems to be impossible to calculate the transformer efficiency through the above formula. One of the approaches to efficiency is

The above formula can be derived as

When the above equation is differentiated corresponding with I1, then

There will be maximum efficiency in the transformer when both the copper and iron losses are the same.

1. What is a transformer used for?

The basic functionality of a transformer is power transmission from one circuit to other circuits by the principle of electromagnetic induction.

2. When was the first transformer invented?

Initially, the transformer was designed by Sebastian Ziani de Ferranti, Lucien Gaulard and William Stanley and implemented it in the year 1886.

3. Who is the father of the transformer?

4. Why are transformers rated in KVA?

As the losses in transformers are not dependent on the power component, these are rated in kVA, where kVA is the unit of obvious power factor.

5. What are the three main parts of a transformer?

The essential parts of the transformer are of primary and secondary windings and the iron core.

Thus, this is all about an overview of a transformer, so the small thought in the brains many great people allowed us today to gain in more scenarios with the extensive advantages shown by a transformer. There is a huge importance for a transformer and implemented in a wide range of applications. Get a detailed scenario on what are the types and working principles of various kinds of transformers?