You are here: Home / Electromagnetic Fields / What is Hysteresis Loss : Formula & Its Affected Factors

The term ‘Hysteresis’ was derived from the Ancient Greek Word and the meaning of this term is a deficiency of leg behind. While defining the property of magnetic material, “James Alfred Ewing” proposed this term in the year 1890. The property of hysteresis is observed in the concepts of chemistry, economics, physics, and engineering as well. This characteristic was included in most of the artificial systems such as in Schmitt triggers and thermostats.

In ancient times, many attempts illustrating hysteresis in mechanical structures were done by James Maxwell. Whereas a formal mathematical hypothesis of systems including hysteresis was developed in the year 1970. And today this article completely focuses on explaining what is hysteresis loss, its magnitude, affected factors, and applications?

What is Hysteresis Loss?

The amount of work exerted by the magnetizing force in opposition to the interior friction of the magnetic molecules generates heat and the amount of energy that is wasted as heat because of hysteresis is termed Hysteresis Loss.

When there is the application of magnetization force on the magnetic substance, then the molecules inside the substance get aligned in a specific direction. And when the applied magnetic force is changed in opposite direction, then the internal friction of the molecules contradicts the reversal of magnetism which results in Magnetic Hysteresis. So, to get rid of this internal friction, there will be the application of some magnetizing force. 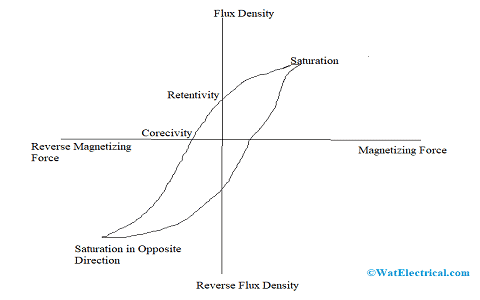 To have a clear understanding of this concept, consider an electric machine. As there is a development of hysteresis loss only when there is magnetism opposition where this might take place in magnetic components of electrical devices. When the machine’s temperature level is increased, these outcomes in energy wastage in the form of heat which seems to be an adverse impact on machines. Thus, because an appropriate magnetic substance that has less hysteresis loss having constricted space for hysteresis loop is implemented for constructing this electrical equipment.

The hysteresis loss formula can be known by considering the hysteresis loop in a ferromagnetic substance. When the MMF is raised from null to greatest value, then the accumulated energy per each unit volume of material is given as follows: 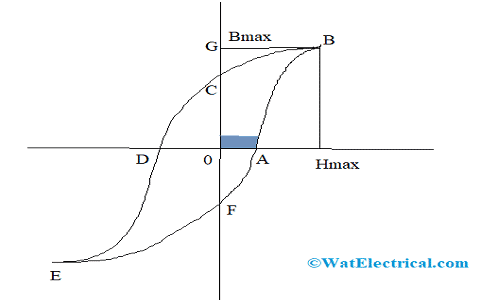 When the ‘H’ value decreases to ‘zero’ and the dB value being negative, then the energy provided by the magnetic field is given by

ʃBbBc = H dB which is the area of the region ‘CBG’

To eliminate the necessity of computation of the loop section, Steinmetz provided a practical formula to calculate hysteresis loss depending on the experimental observations

Here, ‘kh’ represents the characteristic constant of the loop section

‘n’ represents Steinmetz exponent where this ranges between 1.5 – 2.5 based on the type of material

So, the unit of hysteresis loss in Watts/metere3

Let us consider a strip having a minimum thickness of dB on the loop as depicted in the below picture.

For any current value, the subsequent flux value is given by

For less charge, the work done is given by

dW = no. of ampere-turns × flux change

And, when ‘f’ is the total magnetization cycle made per second, then

Hysteresis loss in a magnetic substance per each unit volume is

How do we Reduce Hysteresis Losses?

The applications of hysteresis losses include of following:

On the whole, this is the detailed concept of hysteresis. This article has given a detailed explanation of hysteresis loss, its formula, affected factors, magnitude, and applications. Know, what are the types of hysteresis and how they are represented?