You are here: Home / Electrical Circuits / What is an Electrical Resistance : Unit, Working & Its Formula

The concept of electrical resistance can be explained by comparing it with the hydraulic system. When the current flows through a wire, it is like fluid flow through pipe and the voltage loss that happens across the wire corresponds to pressure drop which gives a force for water through a pipe. So, in this analysis resistance is termed as what amount of pressure is necessary to accomplish specified flow. To be clear, let us look into the below concepts related to resistance like its working, unit of measurement, ohm’s law, formula, and others.

What is Electrical Resistance?

Resistance also termed electrical resistance or ohmic resistance is the measurement for the obstruction of the current movement in the circuit. To know clearly regarding the concept of resistance, let us consider an example. In a metallic material, there exist free electrons that have random movement in the substance. When there is an application of voltage to the substance through the resistance, then the free charged electrons have a movement from smaller potential to greater potential because of the electric field. At the time of drifting, free electrons will have a collision with the atoms and this scenario obstructs the free flow of electrons and develops resistance across the substance.

Resistance can be classified as static and differential resistance. Static type states about power dissipation in electrical devices. Passive instruments that have no energy source will possess positive static resistance. It is represented as

Devices that have differential resistance as negative will provide signal amplification and so utilized as oscillators and also amplifiers. The other devices include IMPATT, Gunn, tunnel diodes, and magnetron tubes.

The resistance values are calculated as

Where ‘R’ is called as resistance measured in Ohms

‘ρ’ corresponds to resistivity and measured in ohm/meter

‘l’ corresponds to the conductor’s length measured in meter

‘A’ corresponds to the conductor’s cross-sectional area measured in m2.

From the above formula, it can be known that wire resistance has a direct relation to the length and inverse relation to the wire’s cross-sectional area. And ‘ρ’ is the proportionality constant which corresponds to the material’s resistivity. 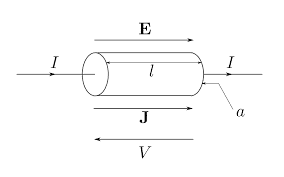 So, the wire’s resistance is dependent on the nature and temperature of the material.

If any of the two values are known, the third value can be known by the application of Ohm’s law. Mostly in electronic computations and formulations, Ohm’s law is used.

Sometimes, people might come across the chances of not remembering these formulas. So, in those situations, ohm’s law triangle is extremely helpful. In this triangle, voltage is represented at the top while the other two values are at the bottom. With this arrangement, the formulas of V, I, and R can be known easily. It is shown as below: 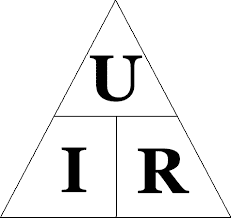 Using ohm’s law, when one volt of voltage and on ohm resistance are applied, then it generates one ampere current to flow. Therefore, for the applied voltage, the more the resistance, the flow of current will be less. So, any electrical component that works as per ohm’s law like cables and resistors are termed as Ohmic devices and which does not function as per this law are termed as Non-Ohmic devices.

The question that comes across many people in the scenario of resistance is that “Does the Size of the Resistor Affect the Electrical Resistance Value?”

Electrical resistors had a wide variety of applications in many industries. Few of them to be discussed are as follows:

These are the most common and few applications of the electrical resistors.

So, this is all about concepts related to resistance. On the whole, we are now aware of the concepts like resistance, its unit, formula, working, applications, resistance calculation through ohm’s law, few types, and how size shows an impact on resistance value. In addition to these, it is also more important to know about how does a resistor work and the typical electrical resistance values?