You are here: Home / Electrical Circuits / Electrical / What is Inductive Reactance : Derivation & Its Example

What is Inductive Reactance?

Reactance can be defined as the opposition which is offered through a capacitor & inductor within a circuit to the AC flow within the circuit. It is quite related to resistance however reactance changes through the AC voltage source’s frequency which is measured in ohms. If we notice current-carrying conductors, we can discover that reactance is present always with resistance. Additionally, reactance also shows in shorter gaps because the DC changes while approaching from a stable flow.

From the above equation,

‘XL’ is an inductive reactance that is measured in ohms

‘f’ is the AC frequency in hertz

‘L’ = the inductance value of the coil in henries.

The circuit diagram of inductive reactance is shown below. 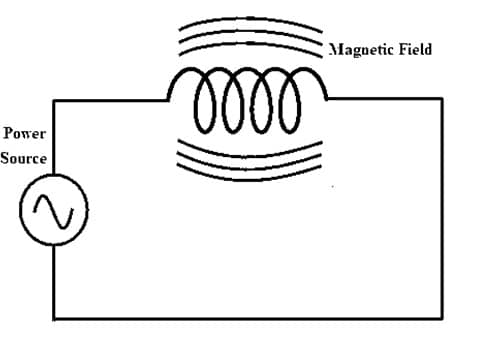 Ohm’s law states that, for that applied voltage, inductive reactance can be directly proportional whereas inversely proportional to the applied current.

The equation for this is

By using the above equation, we can say that voltage increasing or inductive reactance decreasing can cause a rise in current. Similarly, the flow of current will be decreased through a decrease in voltage & an increase in reactance.

Practically, the designing of an inductor must be done with wound wire as it includes some resistance consequently it is not achievable to get a purely inductive coil. Thus, an inductor there are mainly two factors that play a key role to oppose the flow of current namely resistance linked with the coil & inductive reactance given by the property of inductance.

So in an AC circuit, the complete current limiting property of an inductor is the blend of resistance as well as reactance known as impedance which is denoted with ‘Z’.

Here, Ohm’s Law is used to measure impedance value which is given like the following

From the above equation

‘I’ is the flow of current in the circuit

A coil with 130mH inductance with zero resistance can be connected across the supply of a 50V, 30Hz supply. So measure the coil’s inductive reactance as well as the flow of current through it.

Difference between Inductance and Reactance

In electric & electronic systems, the reactance can be defined as the resistance of a circuit component toward the current flow because of that inductance otherwise capacitance of element.

Better reactance can lead to less current for the similarly applied voltage. Reactance is comparable to electric resistance, however, changes in that reactance do not lead to dissipation of heat. As an alternative, energy can be stored within the reactance & afterward come back to the circuit while a resistance constantly loses electrical energy.

The inductive reactance formula can be determined like the following

Thus, this is all about an overview of inductive reactance. The reactance which is generated because of the inductor is known as inductive reactance. Inductors are also known as inductive elements which are used to store energy in the form of the magnetic field. Once an AC is given to the circuit, then a magnetic field can be formed approximately it and it can be changed like a result of an electric current. So, this resists the change of current throughout the element. Here is a question for you, what are the applications of the inductor?