You are here: Home / Electrical Measurements / What is Moving Coil Galvanometer : Working & Its Applications

The first moving coil galvanometer was invented in 1820 by Danish physicist Hans Christian Oersted as an improved version of the astatic galvanometer he had created a few years earlier. Since then, the design has been modified and improved to become smaller, more accurate, and more sensitive. The instrument is still widely used today in laboratories and factories all over the world for all types of electrical measurements. This article discusses an overview of a moving coil galvanometer and its working with applications.

A moving coil galvanometer is a type of galvanometer that uses a loop of wire to measure the electric current. The length of the wire is small compared to the size of the loop, and it moves freely across a magnetic field.

An electromotive force (emf) is generated in the coil by any change of current in this wire which creates a magnetic field. A small needle on the galvanometer moves as this magnetic field changes and indicates the strength of the field by how much it deflects the needle. 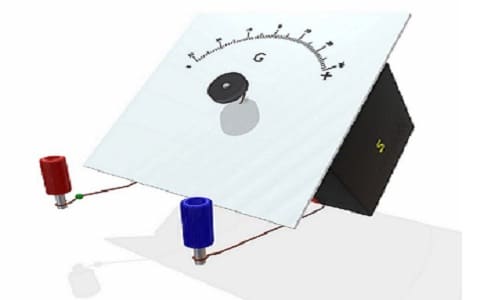 This measuring device consists of a coil of wire suspended between the poles of a permanent magnet. When an electric current passes through the coil, it produces a torque in response to this magnetic field. This torque is detected by a needle attached to the coil. A galvanometer works by detecting the movement of its needle. Please refer to this link for the ballistic galvanometer.

The moving-coil galvanometer functions in a manner similar to the Wheatstone bridge, but has several distinct advantages. The Wheatstone bridge is usually constructed with the moving coil attached to one of the resistors (the load resistor). In this case, the load resistor must be very much larger than the resistance of the galvanometer coil, because the current through both resistors is equal at all times and thus need not be equalized by an amplifier. Since the load resistor must have a large resistance and a large physical size, it is not practical to use this type of galvanometer as a voltage meter in many cases.

The moving-coil galvanometer has a more sensitive design because it uses an amplifier to make up for any difference in current between the two coils. The moving-coil galvanometer is especially well suited for measuring high voltages and currents (or low electrical resistance) because its construction allows for the amplification of small signals from a small-diameter coil.

This moving coil galvanometer is used in applications that require very high sensitivity. In addition to the standard versions, this model can be operated in different modes of operation. These include:

These characteristics make it possible to develop a wide range of applications. For example:

The working principle of this instrument is basically similar to that of the common galvanometer. The moving coil galvanometer has two coils located inside a vacuum chamber. One is the primary coil and the other is the secondary coil. The two coils are placed in parallel with each other, which forms a magnetic circuit. When there is an electric current flowing through the primary coil, a magnetic field (also known as Ampere’s law) is produced as well.

This magnetic field induces an electric potential difference across the secondary coil when it cuts through the magnetic field of the primary coil.
A light beam can pass through an aperture situated at one end of the cylindrical tube where these two coils are placed. When there is no current flowing through any of these coils, the light beam remains static at one end of this aperture. As soon as a current starts flowing through either of these coils, this light beam starts moving towards another end of the cylindrical tube.

The reason behind this phenomenon is that these two coils are wound in such a way that they produce a magnetic field, which in turn produces an electric field and hence an electromagnetic wave. This in turn causes the motion of the light beam towards another end. 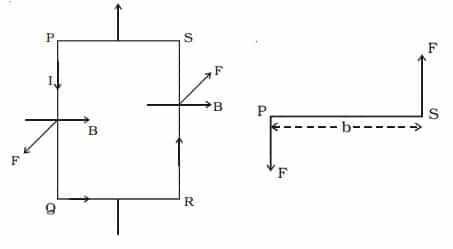 According to the left-hand rule of Fleming, this force is standard to the plane of the coil and works towards the outside.

So, this force is standard towards the plane of the coil & works inside.

This two equivalent and reversely directed parallel forces including different action lines constitute a couple & turn aside the coil. If the turns within the coil is ‘n’,

The deflecting couple moment is nBIlxb

The deflecting torque moment is nBIA

Once the coil deflects, then the suspension wire can be twisted. In the description of elasticity, a restoring couple can be set up within the wire. So this couple is directly proportional to the twist. If the angular twist is ‘θ’, then,

The restoring couple moment is ‘Cθ’

Where ‘C’ is the restoring couple for each unit twist.

Where ‘K’ = C/ nBA, is the constant of the Galvanometer.

So, I α θ, because the deflection is directly proportional to the flow of throughout the coil, so the scale is linear & is adjusted to provide the current value directly.

Current sensitivity of a Galvanometer

The galvanometer current sensitivity can be increased through

By increasing the no. of turns, magnetic induction, and area of the coil and also by decreasing the couple for each unit twist of the suspension wire.

This describes why the phosphor-bronze wire is utilized like the suspension wire which has a tiny couple for each unit twist.

Voltage Sensitivity of a Galvanometer

The galvanometer’s voltage sensitivity can be defined as the deflection for each unit voltage.

From the above equation, ‘G’ is the resistance of the galvanometer.

How Moving Coil Galvanometer is Converted into an Ammeter?

A moving coil galvanometer is used to detect the current flow within an electrical circuit. It is a very sensitive instrument so a large current cannot be supplied throughout the galvanometer, because it may harm the coil. But, a galvanometer (G) can be simply converted into an ammeter (A) by connecting a low resistance in parallel with it. 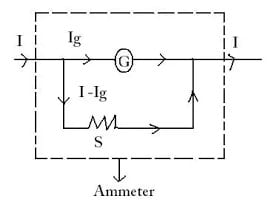 Conversion of Galvanometer to Ammeter

So, the resistance of the Galvanometer is ‘G’

The flow of current within the circuit is ‘I’

When the shunt resistance & galvanometer are parallel, then there will be a common potential.

The shunt resistance will be extremely small as ‘Ig’ is simply a portion of I.

The ammeter’s effective resistance ‘Ra’ is

Here, ‘Ra’ is extremely low & this describes why an ammeter must be connected within series. Once it is connected in series, then the ammeter does not significantly modify the resistance & current within the circuit. So an ammeter is said to be a deal that has zero resistance.

Similarly, the moving coil galvanometer can be converted into a voltmeter by connecting a high resistance ‘R’ in series with it.

So, the effective voltmeter resistance will be

The advantages of moving coil galvanometer include;

The disadvantages of moving coil galvanometer include:

The applications of moving coil galvanometers include:

Many people are confused about the difference between a galvanometer and a moving coil galvanometer. However, it’s important to distinguish between these two types of instruments rather than assume that the terms will be interchangeable.

Thus, this is all about an overview of a moving coil galvanometer and its working with applications. It is one type of instrument used to measure electric currents within a circuit and it is also measured fewer currents even of the few microamperes order. Here is a question for you, what is an ammeter?