You are here: Home / Electrical Machines / What is Piezoelectric Generator : Circuit Diagram and Its Working

One might surely come across the situation of power supply either they are in the inadequacy of power or difficulty with power generation. Based on the principle of energy conversions, these piezoelectric generators deliver many advantages in multiple applications and industries. As piezoelectricity moves with the concept of conversion of energy from one form to another, generators also work on the same. But, what does a combination of piezoelectricity and generator delivers? It seems to be somewhat interesting. So, let’s have our discussion on the same which is Piezoelectric Generator.

What is a Piezoelectric Generator?

A piezoelectric generator is a power generation device that works on the principle of piezoelectricity and it holds the ability to convert mechanical energy. For example, vibrations in the piezoelectric materials are converted to electric energy. For this kind of energy harvesting procedure, any of the piezoelectric materials from four classifications can be considered. But the foremost material used for energy conversion in generators is ceramics and it can also be grouped up with few monocrystals, composites, and polymers. Piezoelectric ceramics when these materials are mechanically stimulated with certain vibration or force, hold the ability to generate electrical energy which is adequate to ignite across the electrodes distance. Furthermore, any of the devices from quartz watches to that to microphones, all these utilize piezo materials and the output is piezoelectric effect to amplify the functioning performance. 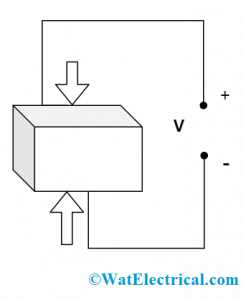 To the most, ceramic materials are employed in the design of piezoelectric generators. PZT ceramal is the element utilized in generators and it is the integrated crystal of both lead zirconate and titanite. There can be the modification of properties in the ceramics materials by varying the properties of PZT compounds. For these piezoelectric generators, the applied voltage and voltage generation directions are specifically known by certain regulations. They have the capability to deliver extended output voltages with minimal electric currents.

The below diagram explains the positioning of elements to form a piezoelectric generator circuit diagram.

The piezoelectric generator working can be explained as below.

The generator functions are similar to that of a piezoelectric element. Here, a PZT element which is a combination of lead zirconate and titanite is positioned in between the electrodes. Just positioning of the element will not create any kind of electric current. When there is the application of mechanical pressure on the element through the electrodes there will be the creation of electric charges inside the crystal. Additional positive and negative charges are created on both sides of crystal faces. The metal plate which is placed on the PZT element collects these positive and negative charges which are used to generate voltage and delivers electric current through the circuit.

The efficacy of the piezoelectric generator can be increased in two ways.

For example, when a piezoelectric material holds the ability to enhance the voltage across the capacitor by 2 – 12 V, then the generated energy will be approximately 0.0154 joules.

The second way is to place the material between the electrodes so that it experiences multiple deformations. This can be achieved by positioning the material either on roads or at sidewalks. The positioning of an element like this can tap it nearly 10,000 times/second.

So, when there is the integration of both approaches, there will be the best results produced.

Let’s consider a real-life situation to closely calculate the amount of power that resulted from a piezoelectric generator. This example is considered a high-way and the output is calculated based on no. of vehicles, traffic density, speed of the vehicles and any other. In this kind of example, axle loading, and vehicle size are the foremost factors.

The average speed of vehicles = 60km per hour

Then the rolling resistance force (Fr) is measured as

Where Cr corresponds to the rolling friction coefficient and varies in the range of 0.03 – 0.15

g corresponds to gravity and m is the vehicle mass and assume as 1550 kg.

t is the loading time and it is measured based on piezoelectric generator length lp (consider 0.50×0.50) and the vehicle speed v.

The mechanical energy is measured by considering the integral f power over time.

And finally, the generated electrical energy is calculated as

These kinds of piezoelectric materials can create electric voltages enough to ignite across the electrodes distance, and so they can be implemented in the devices of ignitors such as fuel lighters, welding tools, gas stoves, and many others. The pressure is applied to the ceramic type of material generated voltage and this creates an ignition spark gap that fires up the fuel source. So, the electrical energy that is generated on the single layer will create extended voltages having minimal current values across extremely quick time gaps. These kinds of piezoelectric materials are minimal, and they are directly ignited.

The other advantages of these when compared with that of other kinds of materials are they are included in high voltage capacitors, transformers and in permanent magnets too. These have a longer time period and need minimal maintenance.

In addition, the generated electrical energy from the piezoelectric material can also be harvested. The type of multilayer piezoelectric generator is varied based on the implementation of various configurations of piezoelectric ceramics and methods to create multilayer capacitors. As because these generate correspondingly maximum current values having no electromagnetic intrusion, these piezoelectric generators are effective solid-state resources for most of the electronic devices. The enhancements in technology allowed many of the micro-electronic methods to reduce electronic devices. As because of minimal size, they need minimal power and these generators receive power from the PZTs. So, these generators come to be genuine, realistic and effective power sources than compared to that of other power generative resources. The applications of multi-layered generators are vehicle tire pressure sensors, wireless sensors, and munitions.

The implementation of both single-layer and multi-layer piezoelectric generators can be found in batteries.

1). What is piezoelectric material used for?

Piezoelectric materials are the devices where they can transform the applied mechanical force into electrical charge.

2). Can piezoelectric charge a battery?

The generated current from the piezoelectric device might be less or more but it is absolutely used to charge a battery.

3). How many volts does piezo produce?

A piezoelectric material can deliver voltages ranging from few milli-volts to tens and hundreds of volts and it is based on the type of piezo used and its construction too.

The most commonly used piezoelectric material is PZT and it is made up of lead zirconate and titanite where the combination of these two generates more voltage.

5). Where is piezoelectricity used?