You are here: Home / Basics / What is a Piezoelectric Effect : Materials and Its Applications

What is the Piezoelectric Effect? 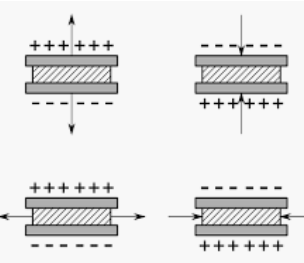 The exclusive scenario that has to be noted is that this effect is reversible which means that the result will be electrical deformations in the material upon the application of the electric field. This is called a reverse piezoelectric effect.

This can be observed mostly in quartz crystal as because these materials are the best applications of this effect. The piezoelectric effect in a crystal is explained as that there will be the development of electric charges on the metal surfaces when certain pressure or stress is applied to the piezoelectric crystal. The developed charge is in direct proportion to the applied stress and the charge can be transformed to voltage through charge amplifiers and the output is denoted as

Where ‘V’ is the resultant voltage level

‘q’ is the electric charge

To power-up piezoelectric machines, these drivers are used to transform minimal voltages to maximum voltages. The input is low voltage signals and with the help of amplifiers, the output will be high voltage signals. The circuit diagram is as below:

This works in exact to that of direct piezoelectric effect where the application of electric voltage creates corresponding mechanical deformations in the piezo materials where the deformation corresponds to either compression or expansion in the material dimensions. It can be simply explained as the transformation of electricity to mechanical energy. Few of the devices that operate on this principle are acoustic speakers, buzzers, actuators, and motors.

These man composed materials deliver accurate results, better to be employed and there are other natural kinds of materials too.

When quartz and lead zirconate titanate are compared, PZT delivers increased voltage and is in proportion to the applied force. Equally, there will be an equal amount of material movement when voltage is applied. It is generally implemented in the applications of ceramic capacitors, actuators, transducers, and sensors.

These days, many institutions are making many piezoelectric effect projects in their syllabus because there are wide applications using this effect.

Piezoelectric materials also hold the ability to generate ultrasounds and the capability of creating and finding out ultrasonic waves. Electric charge carriers will have a movement when this effect is applied and this results in a modification in macroscopic length. When there is an application of A.C voltage, then the particles start to have vibrating motion. Pressure variations can also take place. While particle rarefactions tend to decrease pressure levels and compression leads to an increase in pressure levels. So, the sound wavelength defines the distance that exists between compression and rarefaction locations. The output signal will get propagated in the medium and the signal speed is based on the elastic properties and density that the medium possesses.

The piezoelectric effect has extensive applications in many industries and few of them to be discussed are in:

These devices operate on the principle that mechanical deformation changes to pressure and operates on two dissenting forces of the sensing component. The detection of pressure changes as the sound is the general application of sensors where one can observe in piezoelectric amplified guitars and microphones.

Acoustic kind of transducers utilizes piezoelectric materials to create sound signals. When put in exposure to fluctuating electric field, there will be the development of rarefactions and compressions that results in sound creation. This functionality can be observed in the devices of Sonar transducers, small speakers, tonpilz transducers, inkjet printers, diesel engines, fuel injectors, and loudspeakers.

Quartz clocks make use of crystal oscillator which is made of quartz crystal and it functions on both direct and inverse piezoelectric effects. The output of these devices is a sequence of electric pulses that are utilized for time marking. A similar operation is employed in radio receivers and radio transmitters.

People having the problems of fertilization miscarriage can go with piezoelectric stimulation of oocytes along with intracytoplasmic sperm injection where this procedure can enhance the chances of fertilization results.

Also, piezosurgery is the minimal operation used to cut a tissue showing no impact on adjacent tissues. And the other medical-related applications are ultrasound imaging and ultrasonic procedures.

1). What is the piezoelectric effect in ultrasound?

The operation of converting kinetic to mechanical energy also works as same in the ultrasound transducers and this conversion creates sound waves.

2). Who discovered the piezoelectric effect?

This effect was first discovered by Paul Jacques Curie and Pierre in the year 1880 by working on the crystals Rochelle salt, quartz, and tourmaline.

3). Can piezoelectric charge a battery?

Upon the application of force or pressure for a piezoelectric crystal, the metal plates collect charges and develop voltage. So, this can be used as a battery.

4). What causes the piezoelectric effect?

This effect happens when the charge equilibrium in the crystal matrix undergoes any kind of change.

5). What is the reverse piezoelectric effect?

This effect can be created by the application of electric charge on the piezoelectric material where this creates deformation (compression or expansion) of the material. So here, electric energy is transformed into mechanical energy.