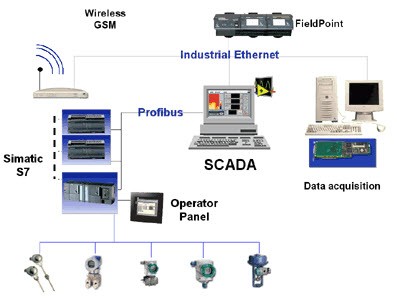 Supervisory control and data acquisition (SCADA) is an industrial control system which is used in many modern industries like energy, manufacturing, power, water transportation, etc. SCADA systems organize multiple technologies that allows to process, gather and monitor data at the same time to send instructions to those points that transmit data.

In today’s world, almost anywhere you can observe SCADA systems, whether it’s a waste water treatment plant, supermarkets, industries or even in your home.

SCADA systems range from simple to large configurations. Most of the SCADA applications use human machine interface (HMI) software that permits users to interact with machines to control the devices. HMI is connected to the motors, valves and many more devices.

SCADA software receives the information from programmable logic controllers (PLCs) or remote terminal units (RTUs), which in turn receive their information from the sensors or inputted values which we have given manually. SCADA in a power system is used to collect, analyze and monitor the data effectively, which will reduce the waste potentially and improve the efficiency of the entire system by saving money and time.

A SCADA system is a common industrial process automation system which is used to collect data from instruments and sensors located at remote sites and to transmit data at a central site for either monitoring or controlling purpose. The collected data from sensors and instruments isusually viewed on one or more SCADA host computers that arelocated at the central site. Based on the information received from the remote stations, automated or operator-driven supervisory commands can be pushed to remote station control devices, which are often referred to as field devices.

The figure shown above is a simple SCADA system with a single computer, which represents the simplest configuration of SCADA with a single computer. The computer receives data from remote terminal units through the communication interface. One or more CRT terminals for display is controlled by operators. With this system, it is possible to execute supervisory control commands and request the display of data in alphanumerical formats.

The I/O SCADA programming is used to change the supervisory software. In the basic SCADA system, all the data and programs are stored in the main memory. The more complicated version of SCADA has additional secondary memories in the form of magnetic disc units.

Applications of SCADA in Power System

As the power system deals with power generation, transmission and distribution sectors, monitoring is the main aspect in all these areas. Thus the SCADA implementation of power system improves the overall efficiency of the system for optimizing, supervising and controlling the generation and transmission systems. SCADA function in the power system network provides greater system reliability and stability for integrated grid operation. 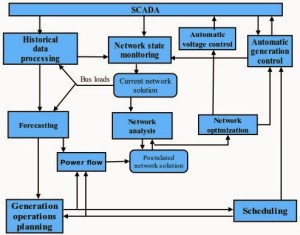 With the use of Programmable Logic Controllers (PLC) hardware and powerful bus communication links along with SCADA software and hardware’s in power generating stations, delivering an optimal solution for each and every process operation is flexible with advanced control structures. The below figure shows the SCADA structure in power generation where it supervises several operations, including protection, controlling and monitoring. The functions of SCADA in power generation include 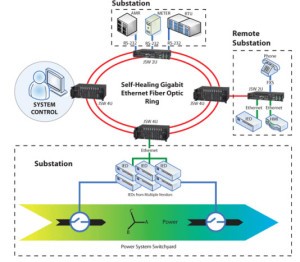 The figure shows the structure of SCADA in power system where it collects the entire data from various electrical substations (even at remote locations) and correspondingly process the data. Programmable logic controllers in substations continuously monitor the substation components and corresponding transmits that to centralized PC based SCADA system. In the event of any outages of power this SCADA allows to detect the exact location of fault therefore without waiting for the calls from customers SCADA gives an alarm system to the operators for identifying and preventing it. And also in substations SCADA automatically controls isolator switches and circuit breakers for violating parameter limits, thereby continuous inspection of parameters are performed without a line worker. Some of the functions of SCADA in power distribution system are given below.

The main goal of this project is to process and control the working of industrial machinery by using SCADA. 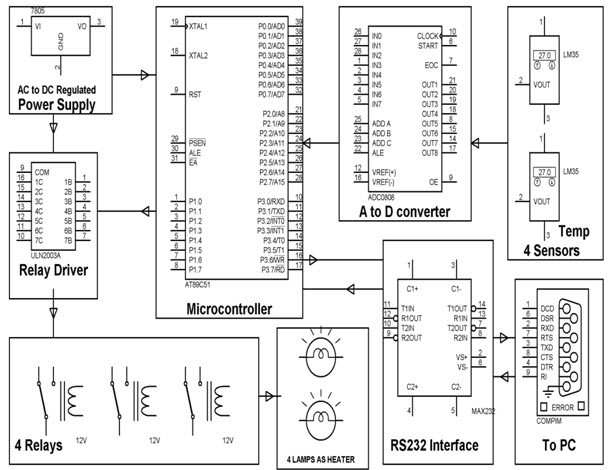 The multiple mechanisms in the industries are unable to control manually. So, for controlling these mechanisms efficiently, it is necessary to adopt a technology namely SCADA

Hence, the mechanisms of industries can be controlled more efficiently and safely by using SCADA, which is more economical and time saving technology.

The main intention of this project is to process and control the working of industrial machinery by using SCADA wirelessly. 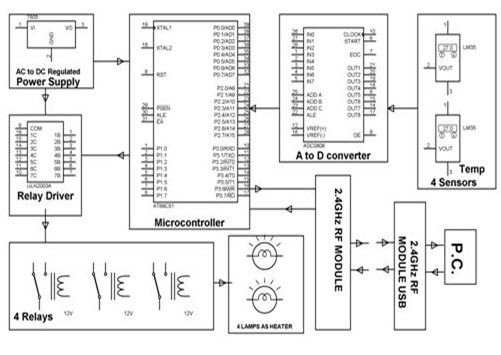 The multiple mechanisms in the large-scale-remote industries are difficult to control manually. So, for controlling these mechanisms efficiently,a technology namely wireless SCADA ( supervisory control and data acquisition) is required. In large-scale wireless industries, by using wireless SCADA, you can monitor all the processes and control the factors which are affecting them.

In this project, a remote plant operation is undertaken to operate the remote plant. Here, temperature sensors are interfaced properly to the 8051 microcontroller. The data which is received from the temperature sensors is continuously sent over 2.4GHz transmitter wirelessly to the microcontroller. Then, it is received by the 2.4GHz USB type receiver which is connected to a PC.

At the front end, a data-acquisition system is loaded on the computer which takes these values and displays them on its front panel and also logs them in the database. One can set parameters such as set point, a low and high limit on the computer screen. When the sensor’s temperature goes away from set point, then the microcontroller sends command to the related relay. The lamps connected through the relay contacts are turned on or off. If this system fails, then an AV alarm will be generated on the PC using high limit and low limit features.

Hence, the mechanisms of large scale remote industries can be controlled more efficiently and safely using wireless SCADA, which is more economical and time-saving technology.

Thus, this is all about the SCADA applications in power systems. SCADA is used in the industry with the perfect “Man Machine Interface”. It has solved many problems related to supervision, monitoring, controlling and data acquisition. It has manifold applications like Distribution Management, Energy Management, Power Plant Management, Oil and Gas Distribution System. SCADA has also enabled grid monitoring by virtue of which power can be bought & shared on a national basis. So the application of SCADA is beneficial to the Indian power sector as well. Leave your comments about this article in comment section.