You are here: Home / Basics / What is a Thermocouple : Working, Diagram and Its Applications

There are a total of 3 effects on which the principle of operation of thermocouple is based. All of three effects are Thomson, Peltier, and Seebeck which are explained below in detail.

The following are circuit diagrams of Thermocouples.

Here is Thermocouple Principle in discussed in detail. The Construction of Thermocouple is already shown in first figure which is comprising of two different metals named A and B joint together forming 2 specific junctions named p and q having temperatures T1 and T2. Both temperatures are maintained well. The formation of thermocouple is not possible without formation of junction and as depicted from figure, both junctions are being maintained at dissimilar temperatures, therefore forming Peltier effect and an EMF is generated through circuitry.

There can be many devices which may be used for the measurement of EMF of circuit of thermocouple. The extent to which EMF is developed in the circuitry of thermocouple is depending on the metals, however mostly the amount of EMF is very small, usually in millivolts. Therefore, the sensitivity of the device measuring EMF is very important. There are a total of 2 devices which are mostly used for the measurement of EMF known as Voltage balancing potentiometer and galvanometer. 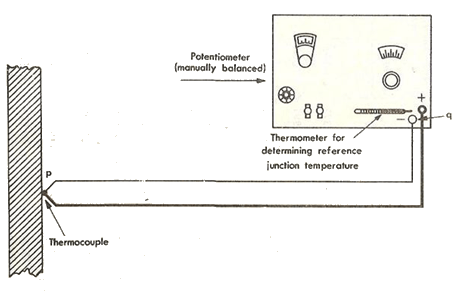 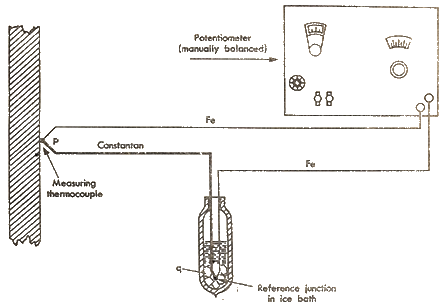 As already explained in detail that a thermocouple is a device which is composed of two different metals or entities which are joined together for making a junction which is also known as measuring end. The metals are known as thermo-elements. These metals are also sometimes referred to as thermocouple’s legs. Both ends of the junctions are distinguished from each other through names of negative and positive ends. There are a total of two temperatures T1 and T2 which has been mentioned earlier. This can be shown in figure below for measurement of thermocouple output.

Here, EMF is known as the electro motive force or also known as voltage that is produced through thermocouple at tail while T1 and T2 are the temperatures which are taken from the measuring end and reference end while S12 is known as the coefficient of seebeck of both metals of thermocouple. The coefficient of seebeck is highly depending on the material which is used for the composition of metals of thermocouples. From the equation mentioned above it can be deduced that: