You are here: Home / Basics / What is an Ohmmeter : Working Principle & Its Types

Initially, ohmmeters were evolved based on the design construction of a meter known as “Ratiometer”. Ohmmeters under this classification only calculate the value of resistance because they are not simply integrated into the multimeter construction. Insulation testers which depended on a hand moved generator also works on a similar operation. This makes sure that indication was completely autonomous of the developed voltage. Following this, various designs of the ohmmeter supplied a tiny battery to provide a voltage to the resistance through the galvanometer in order to calculate the current values using resistance. Let’s have a clear thought on what an ohmmeter is, its operating principle, types, and benefits?

What is an Ohmmeter?

The ohmmeter is used to measure the quantity of electrical resistance between two points and this value is expressed in terms of ohms. The resistance which has to be known can be either in series or parallel connection with that of the device. In the parallel connection, the device draws high current because resistance is increased. Whereas, in series connection, the device draws less current because resistance is increased. Micro Ohmmeters are used for knowing the mess resistance values and the mega ohmmeters are used to know high resistance values. This device provides enhanced convenience to measure the values, but the results are not so accurate.

Using a battery and a series variable resistor, readings are known through this device. At the terminal end, the resistance that has to be calculated is connected. With the connection of output resistance, current flows in the device and the deflection can be measured.

With this device, one can know the approximate values of the resistance. Depending upon the application, the ohmmeters are mainly categorized as three types and they are as follows:

Let us have a clear discussion of these types of ohmmeters. 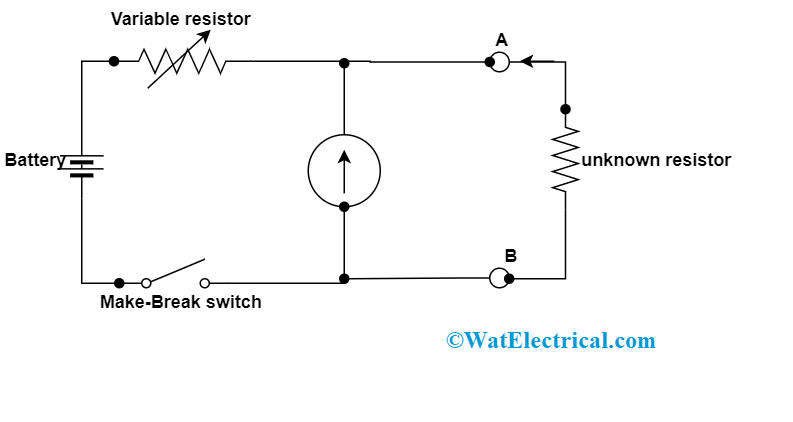 When the unknown resistance value is ‘0’, then there will be the maximum current flow across the meter. In this case, 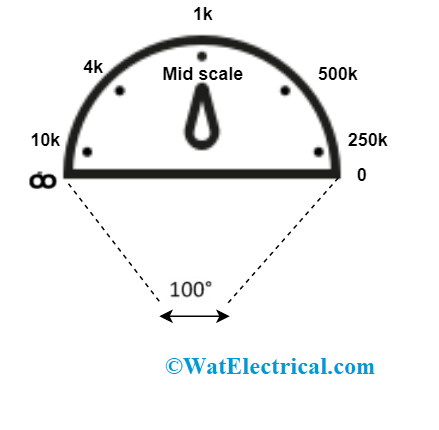 Like this, by modifying the values of unknown resistance, the meter reading will show multiple deflections. Thus correspondingly, we can signify these deflection values as per the resistance values. The calibration scale of the series ohmmeter has indications ranging from 0Ω to ∞Ω at both the ends of the scale. Mostly, this device is utilized to calculate maximum resistance values.

In this type, the resistance value of the circuit that has to be known should be in parallel connection with the meter. Here, the basic measuring meter, the battery, and the variable resistor are the essential components of shunt ohmmeter. The value of the resistance that has to be known is positioned between A and B ends. For the shunt connection, the ohmmeter circuit diagram can be shown as follows: 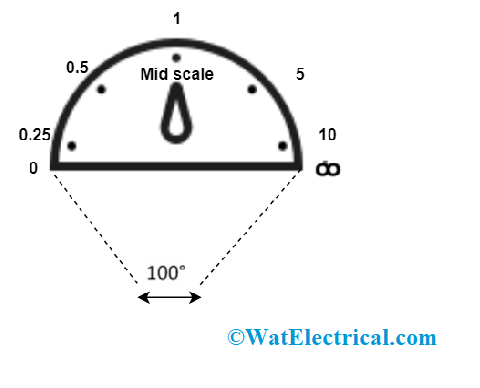 Like this, by modifying the values of unknown resistance, the meter reading will show multiple deflections. Thus correspondingly, we can signify these deflection values as per the resistance values. The calibration scale of the shunt ohmmeter has indications ranging from 0Ω to ∞Ω at both the ends of the scale. Mostly, this device is utilized to calculate minimal resistance values.

In this kind of ohmmeter, the range is maximum. Through the help of a variable, the range can be selected as per our requirement.

For instance, when we would like to calculate the value of resistance below 10Ω. Then the resistance whose value to be known should be in parallel connection to the meter. The magnitude value of the resistance is known using the deflection in the pointer.

So, these are the types of ohmmeter. Upon the requirement to calculate either high or low values resistance, the corresponding type is used.

As this basic instrument to be required in almost all the applications there are extensive uses of the ohmmeter. Few of those to be described below:

1). What is the ohmmeter scale?

It is the calibration scale that represents resistance values from zero to infinite and this is deflected depending on current values.

2). Is ohmmeter the same as multimeter?

3). What is a low resistance ohmmeter?

This is the micrometer which is used to measure micro values of resistance.

4). What are the different parts of the ohmmeter?

The parts are variable resistor, an unknown resistor, a battery, a switch, and the basic meter.

5). How much voltage does an ohmmeter use?

This device generally calculates the flow of current and mostly 1.5V is used by the battery to operate.

This is all about an overview of an ohmmeter, its operating principle, types of the device, how they are connected, and various applications. From a small range of devices to huge devices, these are mostly implemented in various industries and domains. The further question that arises here is what are the practical applications of an ohmmeter?